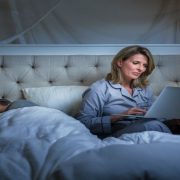 “One morning I shot an elephant in my pajamas. How he got into my pajamas I’ll never know.”i

The stock market’s robust rebound continues.  In April and May, the S&P 500 completed its best two-month stretch since the last financial crisis in 2009.  Last week it added another 4.9% while the Dow Jones Industrial Average gained 6.8% and the Nasdaq Composite reached a new all-time high.

The European bourses were celebrating the announced €1.35 trillion ($1.52 trillion) ECB stimulus program.  This new package will focus on buying government and corporate bonds and will be added to the current €750 million plan.  Before this was released, forecasts called for a more than 8% contraction in European economies.

Critics have claimed that the ECB and European officials have not been aggressive enough in combating their economic and social challenges.  While they have not yet reached the size that have been implemented on this side of the Atlantic, European equities welcomed the effort.  Perhaps this is a new version of “Made in America”.

Of course, euphoric stock markets seem to contradict a backdrop of civil unrest and violence, deep social division, a record number of job losses, pandemic conditions, and a very uncertain economic path. The rally is partially based on optimism that the economy briskly bounces back, a vaccine can be developed, and our world returns to something resembling 2019.

Another important part of the stock market rebound is the role of global central banks.  The various multi trillion-dollar stimulus programs have provided increased liquidity which has eventually impacted stock prices.  A more cynical suggestion is that the Fed is directly supporting the stock market.

Despite the Fed’s mandated focus being restricted to inflation and employment, many have long suspected that it closely watches stock market prices.  The term ‘Plunge Protection Team’ or PPT is widely known among professional traders and refers to a department within the Fed whose alleged function is to buy S&P 500 futures contracts during times of intense selling and thus supporting the stock market.

Naturally, as the U.S. stock markets have rallied back to pre-shutdown levels, skeptics look for nefarious motives driving the move.  The tales encircling this latest rally is that the PPT has been active in the overnight trading sessions.

The S&P 500 futures essentially trade 24 hours a day beginning on Sunday evening (Monday morning in Asia) and stop when U.S. trading concludes on Friday afternoon.  During the overnight session (for the U.S.), trading volumes are lower than regular trading hours and it is here that some are accusing the PPT of interference.

The second chart is another version of this phenomenon but only covers from the beginning of May.[iii]  The point is that the majority of the price gains during the bounce from the March lows took place while the U.S. was snoozing.  Overall, the gains have been impressive and long-term investors have benefited as they are not concerned about when prices move higher as long as they move higher. 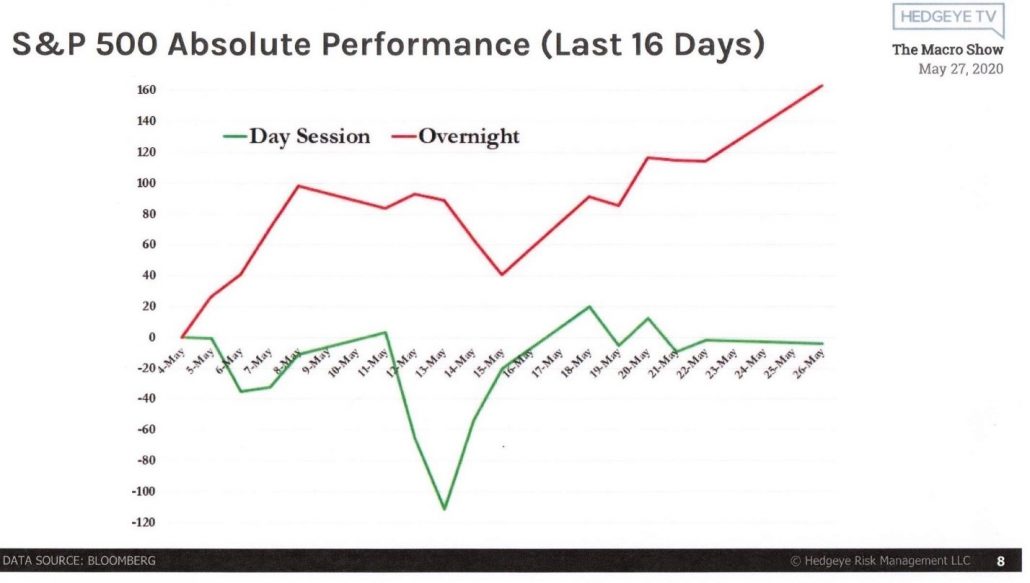 This overnight activity has resulted in a new investment fad which is called ‘pajama trading’.  This is trading the U.S. markets from home throughout the night presumably in our PJ’s.  Instead of getting comfy with a good book, households are slipping on their pajamas and logging into their investment accounts.

It’s difficult to determine what role (if any) the Fed has in the overnight price appreciation.  Given the lower trading volume levels during this time, they would likely get a bigger bang for their buck.  This leads to the question of what type of pajama does the Fed chairman wear?

As mentioned above, last week was very good for the stock markets.  Below is a table of the year-to-date returns as of June 5th.

While the stock markets have stabilized and bounced, other sectors of the capital markets remain in a much different state.  Bond yields, which plunged to record low levels, remain at absurd levels.  The 10-year Treasury note’s yield closed last week at 0.9% while the 30-year bond ended at 1.67%.  This is at odds with the confidence being reflected in the stock market as strong economic growth would typically be accompanied by higher interest rates.

Crude oil has enjoyed a bounce after trading in the single digits per barrel in April.  Last week West Texas Intermediate (WTI) was up 11% to $39.55 per barrel.  It is still down 35% year-to-date.  Natural gas was down 3.6% last week and is 18.5% lower for 2020.  There have been production cuts by energy producers as they struggle to reduce supply to match falling demand.

May employment data was reported last week and surprisingly showed job growth instead of expected losses.  While the unemployment rate jumped to 13.3% there were forecasts around the 20% level.  Unemployment benefits and stimulus checks help, but there will need to be sustained income in the form of paychecks to displaced individuals in order to help the economy.

There is much uncertainty about the path of reopening and rebuilding the economy.  The stock markets are expecting a smooth and healthy recovery.  Bonds and commodities are reflecting a different view.    The amount of turmoil and hostility expanding throughout the country makes economic forecasts educated guesses.  Unfortunately, beyond the demand for plywood, very little is clear.

“Never Attempt to Win By Force What Can Be Won By Deception” -May 16th...

“Ignorance is Bliss”
Scroll to top