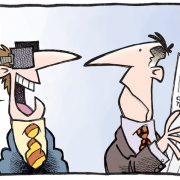 According to the stock market, there isn’t much to worry about.  Equities in the U.S. have rebounded from the nasty pandemic selloff and are sending a signal that the economy has returned to the road of stability and growth.

On the other hand, according to the headlines, there isn’t much not to worry about.  Social division, conflict, and turmoil dominate our existence. Add to this the economic shutdowns, historic unemployment, and widespread rioting and we get a different story than that of the upbeat stock market.

Logic would suggest that these opposing worlds cannot diverge forever.   The equity markets trade as if humanity has risen to a utopian state.  This is happening while society faces countless challenges and uncertainties as we adjust to a vastly different way of life.  Never have we encounter so many cultural unknowns.  Either our society and economy regain the vitality of past couple of years or stock prices need to retreat.

As far as achieving an idyllic cultural condition, some may already have.   With enhanced unemployment benefits, one-time stimulus checks, mortgage forbearance, and suspended car and credit card payments, workers are being paid for staying home while having their financial commitments suspended.

Below is a chart showing the number of weekly unemployment claims.  Everyone knows that a lot of people are out of work, but this picture is worth a thousand words.  It illustrates how remarkable the situation is.  Continued weekly claims filed reached 25 million in June which is 5 times the peak in the last financial crisis.  Continuing claims or those filing for unemployment each week remains at around 20 million. 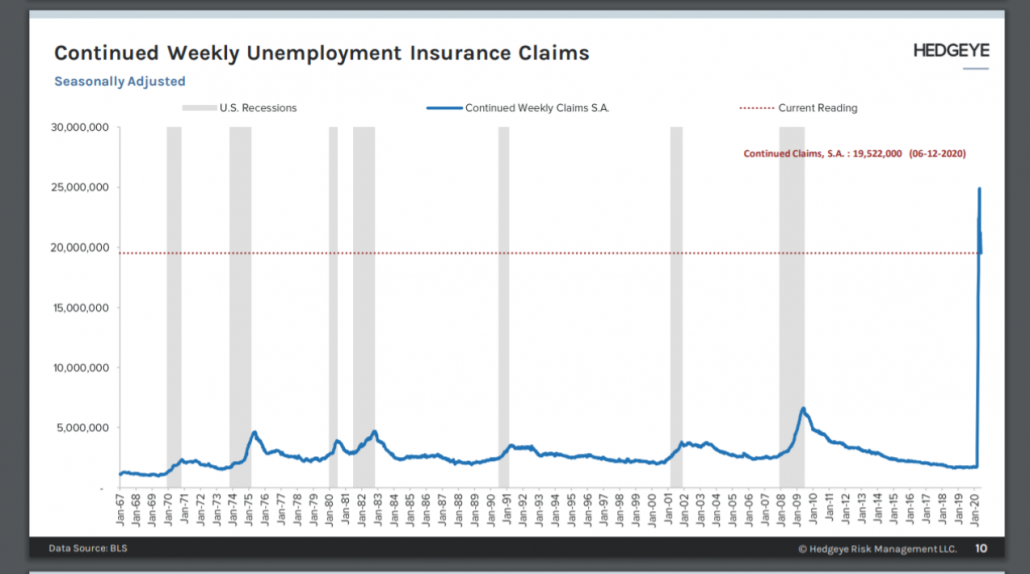 Here is a related chart showing the amount of stimulus money households received in April.  The total is $3.12 trillion dollars.  Again, we know the Treasury sent out a lot of stimulus, but this shows how astounding that amount is.  There has never been anything close to this level of assistance. 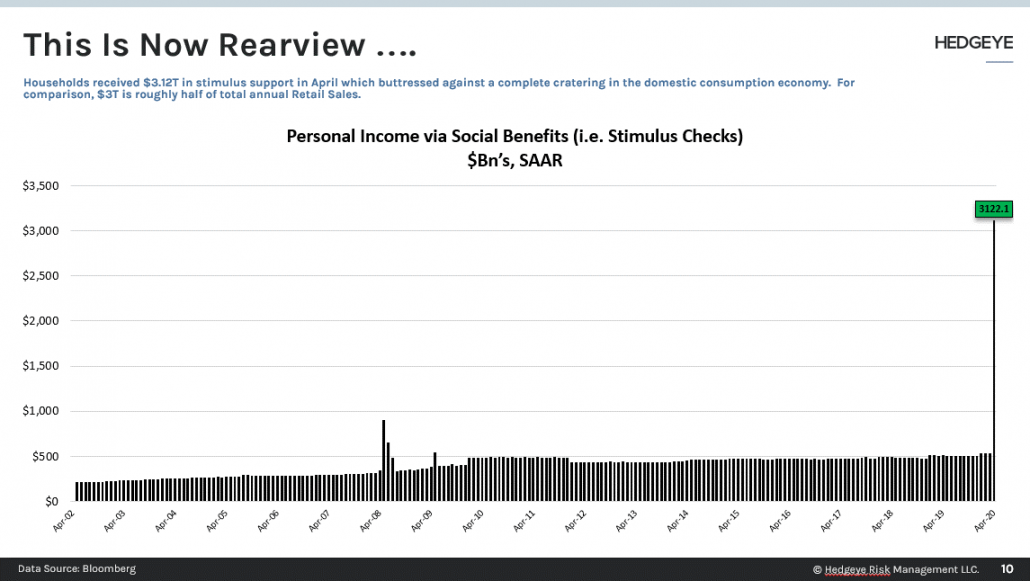 These numbers paint a picture of what is happening on Main Street.  It is gravely different from the stock market’s view.  Hopefully, the job market and the general economy begin to improve as businesses re-open.  In other words, the much predicted “V” shaped bounce.   However, given the severity of unemployment, there is a much to recover.  Also, there is risk of a day of reckoning with some portion of stimulus recipients that must start making mortgage, car, and credit card payments when the super-sized stimulus ends.

In the meantime, the stock market is making a bet that everything ends well.  Of course, plan “B” centers on the Federal Reserve.  Our central bank has played enormous role in supporting the stock and bond markets.  They have been buying all forms of debt which has injected enormous liquidity through all markets.

While they haven’t admitted to directly buying any stocks, equities have visibly benefited. Below is a table of the year-to-date returns as of June 26th.

Large caps and technology sectors have been the best performers.  The Nasdaq is making new all-time highs while the S&P and Dow have trimmed their losses.  Small caps continue to lag.

There is even further concentration within the winning sectors.  As of the middle of June, three stocks accounted for 89% if the S&P 500’s returns.  Amazon, Apple, and Microsoft have combined to provide an incredible amount lifting within the stock market.  Owning or not owning these three stocks has made a huge difference in 2020.

Another revealing statistic is the fact that only 150 stocks in the S&P 500 were up YTD.  With 70% of the stocks declining for the year, it is remarkable that the S&P 500 is only down single digits.  Once again, this demonstrates the performance power of Amazon, Apple, and Microsoft.

One large headwind facing stocks is the decline of profitability.  Below is a chart showing the value of the stock market and the amount of corporate profits.  As shown, there is a high correlation between profits and equity prices.  A divergence began around 2016 and has widened in 2020.  Despite the Fed’s involvement in the markets it is hard to imagine this continuing.  Once again, profits need to catch up to stock prices or equities will retreat toward profits. 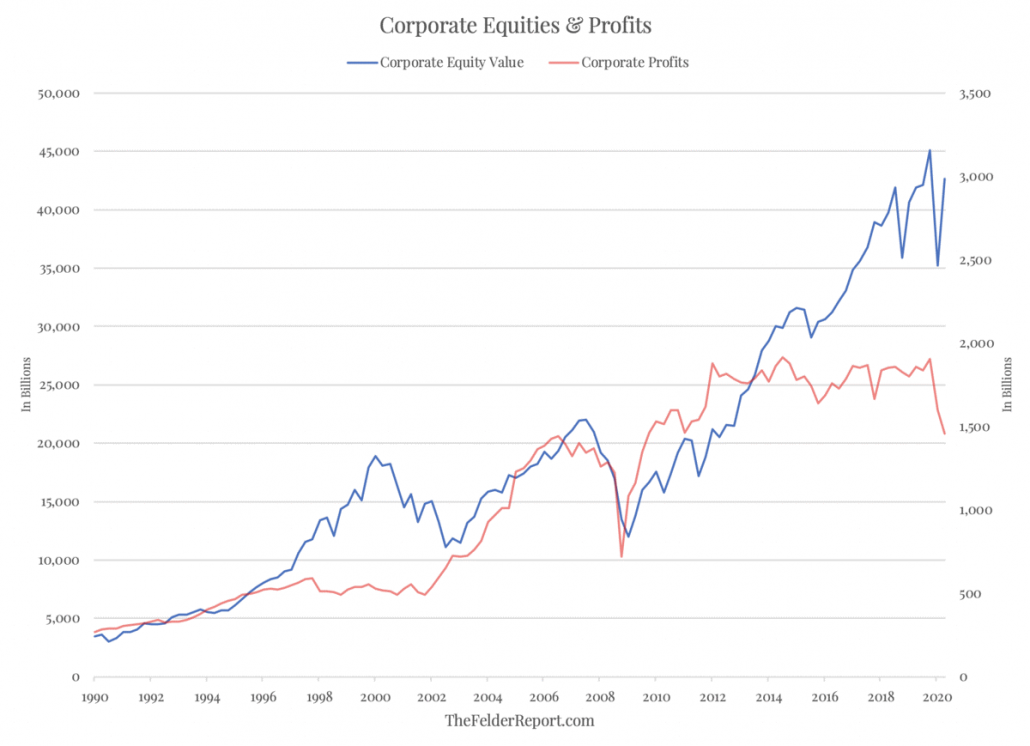 The conflicting messages being sent by Main Street and Wall Street are a mystery.  An economy that includes historic numbers of people getting paid not to produce (many incidences getting more money to stay home than they made while employed) is normally a troubling sign.  Add to this a cultural civil war and a break down of moral standards.  It is remarkable that the markets are functioning at all.

As the financial markets have stabilized and rebounded, it communicates a belief that these problems are temporary.  Further it says that the recovery will be speedy and complete.  And if for some unknown reason it doesn’t work out that way, the Federal Reserve will save the day.   The biggest risk is that of record high stock prices.

The pandemic has impacted our lives in countless ways.  One interesting thing at is relates to the stock market is the arrival of those who previously gambled on sports and at casinos.   The popularity of the Robinhood app (and its free trading) has drawn in this new group of ‘investors’.  It is largely comprised of people trading stocks for the first time.  This inexperienced gang have caught the stock market recovery and have made money.  Let’s hope they understand that stocks move both ways.

The ability to connect the economic and cultural realities to the financial markets might be a challenge for some.  History has shown that there is a definite connection between the two.  But, as the old Wall Street saying goes, “Don’t confuse brains with a bull market”.

“One morning I shot an elephant in my pajamas. How he got into my pajamas...