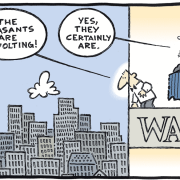 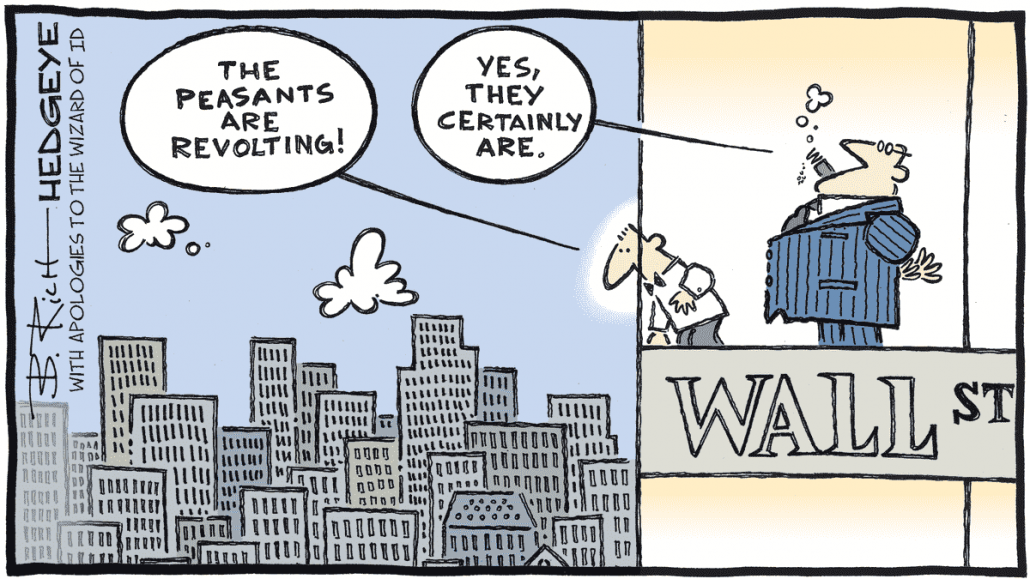 “There’s Battle Lines Being Drawn, And Nobody is Right if Everybody is Wrong”[i]

There was a common and popular plea throughout 2020 and it was for the year to end as quickly as possible.  This widespread wish was based on the belief that 2021 could not come close to matching 2020’s troubles and, by default, would have to be better.  Further, there was hope that life would return to normal as defined by pre-pandemic conditions.  While the New Year is only a few weeks old and optimism reins, signals suggest that 2021 could match or exceed last year’s misery.

Last year we suffered through a pandemic, economic shutdowns, stay at home shut-ins, widespread business failures, and historic unemployment.  As a result, we learned about Zoom meetings, masks, hand sanitizer, social distancing, and Netflix binging.  The situation was intended to be temporary until the case numbers decreased or a vaccine was available.

Another notable characteristic of 2020 was cultural differences and division. Unfortunately, no medical solution will heal this, and, despite calls for unity, the situation is worsening.  The opposing sides appear to be moving farther apart as well as expanding the number of issues of disagreement.  Before you know it, we’ll be yearning for the good old days of 2020.

Our cultural split began years ago and was generally defined along political parties.  This has morphed into the current battle map with squiggly lines that have many angles to define allies and the enemies.  The landscape has turned into a “Uni-Party” of the ruling class and their financial supporters against anyone outside the aristocrat category.  This is no better illustrated than by the walls that were put up to ‘protect’ our elected officials and staffs while the wall on our southern border protecting the rest of us is judged unnecessary.

A new front in this war began last week in lower Manhattan.  A large army of individual investors did battle against hedge funds and traditional Wall Street enterprises.  These firms and banks had made massive bets against some struggling companies via short sales.  This is when someone borrows the shares from a brokerage firm with the intent of returning the shares later.

The hedge funds and traders that are borrowing these shares are betting that the price of the security declines.  Once the price of the stock falls, they then buy the shares that they borrowed at the lowered amount and make a profit. The goal is to make money on a falling stock price.

The short seller’s risk is that the stock price increases after they sell the borrowed shares. The borrowing firm must return the shares so any increase in price will result in a losing trade.

The hedge fund and large traders had targeted some businesses with significant challenges.  One of the lead companies in this confrontation is GameStop, the world’s largest video game retailer.  They are facing a network of stores which increases fixed costs, declining sales, shrinking margins and increased competition.  This appeared to be the flawless short sale situation.

Hedge funds and their colleagues took dead aim and sold the stock with both fists.  The strategy got so popular that over 100% of the float (the number of shares outstanding less shares held by insiders and other restricted shares) was shorted.

This extreme positioning got the attention of a group of individual investors who used a Reddit.com chat room to exchange ideas.  They bought GameStop which dramatically drove the price higher.  Then others saw what was going and bought the stock.  The shares jumped from under $20 to almost $480 in two weeks.  Other heavily shorted stocks also were bid up in similar fashion.  AMC Entertainment, Nokia, and Blackberry.  They had one thing in common – they were heavily shorted.

The higher price caused indigestion among the players that were short, and many were forced to cover (buy the shares to repay the shares on loan).  Some hedge funds lost billions of dollars and one of the hedge funds, Melvin Capital, had to get bailed out due to large losses.

This saga is a classic David vs. Goliath.  The Reddit Rebels, a diverse group of individuals, combating the sophisticated and shrewd Wall Street.  This band of individual investors initially got the upper hand as they drove their targeted stocks higher and forcing losses and pain on the hedge funds.

Then the plot took an unexpected twist as Wall Street unilaterally changed the rules.  Without notice Robinhood, a popular trading app, restricted “buy” orders in the names that the hedge funds were short.  Without the Robinhoodies’ buying support, GameStop fell from over $450 to under $200 in one day.

The developments behind the restriction are unclear.  Some claim that Robinhood had too little capital but that doesn’t explain why only a few stocks were banned.  Others claim that large hedge funds pressured Robinhood so that they could recover some of their losses.

The battle eventually turned into a public relations dispute as media outlets and regulators defended the established Wall Street crew.  Some claimed these were necessary measures to maintain Wall Street’s integrity.  Others declared these small traders were an attack on the free market system.  Finally, one compared the Redditors to insurrectionists like those who invaded the Capital offices and labeled them as a national security threat.

These allegations were hyperbolic media manure.  “Free markets” is an anachronistic term.  If global central banks manipulate interest rates and the capital markets (as they do now), we are not in a free markets system.  Further, “integrity” and “Wall Street” is a laughable and blatant oxymoron.

Reddit defenders accused the hedge funds of collusion as they suppressed trading access and manipulated the stock market for their gain.  Besides Robinhood, other brokerages firms like TD Ameritrade and Charles Schwab abruptly restricted trading in GameStop and other popular Reddit stocks.  There was no mention of capital calls for these firms.

As retail investors took on the establishment, they got support from a wide and surprising diverse group.  Donald Trump, Jr. complained, “This is what a rigged system looks like, folks!”[ii].  New York Congresswoman Alexandria Ocasio-Cortez was equally critical of the brokerage industry pointing out that the people who have treating the economy as a casino are angry at a group of individuals doing the same thing.

While the outcome is uncertain, GameStop may be a one hit wonder for the Redditors.  To be sure, there will be other stocks to trade, but one obvious conclusion is that some of the participants need more financial education and trading experience.  Nevertheless, there should not be some nobility restricting their freedom to execute their decisions with their own money in the capital markets.

This conflict has multiple parallels to the censorship and suppression that is spreading across our culture.  Those who question the aristocracy or refuse to mouth the party line are being a targeted as threats and must be punished.  Political leaders, bureaucrats, and big tech have combined to police our society.  Similarly, those who challenge corrupt insiders in the financial industry are being besieged as evil radicals that must be destroyed.  The view from the Wall Street and Washington insiders is that this uprising and challenge to their position must be squashed at all costs.

While this war raged, there was worry that it would become systemic and deeply impair the capital markets.  Hedge funds use massive leverage in their trades.  Also, there is a great amount of duplication within hedge fund positions.  That is one of the reasons behind the astounding amount of shorts on things like GameStop.  As many firms were losing billions due to the Reddit Rebels, there were concerns over critical failures within the hedge fund community that could pull the system down.  It hasn’t happened – so far.

It is encouraging that the capital markets have withstood this dramatic tale.  However, stocks did selloff in the last 4 trading days of January and the Dow Jones Industrial Average and S&P 500 closed lower for the month.  The small cap stocks (represented by the Russell 2000) were the weakest sector in 2020.  With a new year, we have new leadership as the small caps were the strongest in January.  Here is the performance of the main indexes for January.

There is an old Wall Street adage that January gives the direction for the full year.  If January is positive, there was a high probability that the year would be up.  This was historically measured by the Dow’s and S&P 500’s performance and is called the January Barometer.

Data in recent years is questioning the strength of this relationship.  According to LPL Financial (February 1, 2021), 8 out of the last 9 times that the S&P 500 was lower in January, the index was higher over the 11 remaining months.  However, there might be a different result from a red January.  Volatility spiked in recent years that had a down January which is an obvious and expected outcome for 2021 given the country’s divide.

The economic and social landscape is at an unstable point.  The established elites will fight to maintain their position and power.  Given the progress of the Redditors, the individual investor doesn’t seem likely to backdown.  This situation as well as the issues facing our country will likely intensify rather than go away.  Perhaps this can be summarized as the banks and their colleagues are too big and important to fail and the individual is too small and insignificant to succeed.