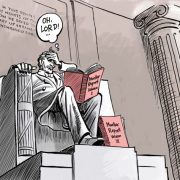 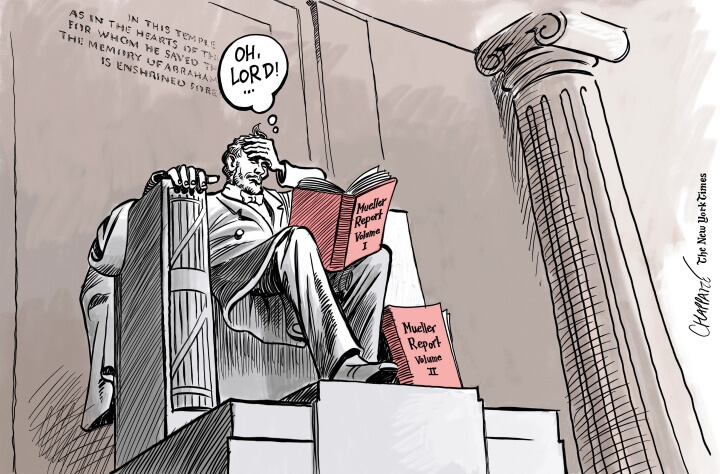 With the Mueller Report released, we’ve learned that there was no Trump – Russian collusion.  Of course, this did little to reduce the controversy surrounding the Trump administration and both sides claimed the report defended their view.  The investigators, now that they are done with the President, should turn their focus to the stock market because it sure looks like some collusion is going on.

The mystery in U.S. equities is the incredible and historic start to 2019 despite a backdrop of weaker fundamentals.  As stocks have recovered from the last year’s 4th quarter selloff, many are wondering what is driving the buying.  The global economy is slowing, the U.S. Treasury bond yield curve is flat and flirting with inversion, and corporate earnings estimates are declining.  Yet stocks keep climbing.

Of course the bulls have justifiable reasons for this rally.  But before covering them, let’s look at some of the glass half empty views.  Two are centered on interest rates.  One is the message being sent by the fixed income market that dramatically differs from the stock market strength.  The other looks at the structure of the yield curve that is also in conflict the equity rally.

Normally, higher stock prices are a function of growing earnings which is associated with a strong economy. A growing economy is usually accompanied with higher interest rates as there is a greater demand for capital.  Below is a graph of a world stock index vs. the shape of the U.S. Treasury bond yield curve.

Usually the yield curve is shaped from lower left to upper right as lenders require a higher interest for the uncertainty that comes with longer time periods.  The graph’s blue line captures this as it is the yield on the U.S. Treasury’s 10-year minus the yield on the 3-month bill.  As this blue line travels lower, it means the spread shrinks.  When the difference between the short term rate and the long term rate is small, the yield curve is flat and this is associated with slow growth or recession.

The orange line on the graph shows 2019’s strong rebound in global stocks.  This points to expectations of economic growth.  However, at the same time, the flattening yield curve is showing that the bond market is calling for a slowing economy.  Looking back, there was a similar, albeit smaller, divergence last summer.  It was initially resolved in the middle (stocks came down some and the yield curve steepened a little).  But ultimately, stocks fell to the December lows.  Maybe the Fed’s recent policy pivot is enough to keep the shark from biting anything. 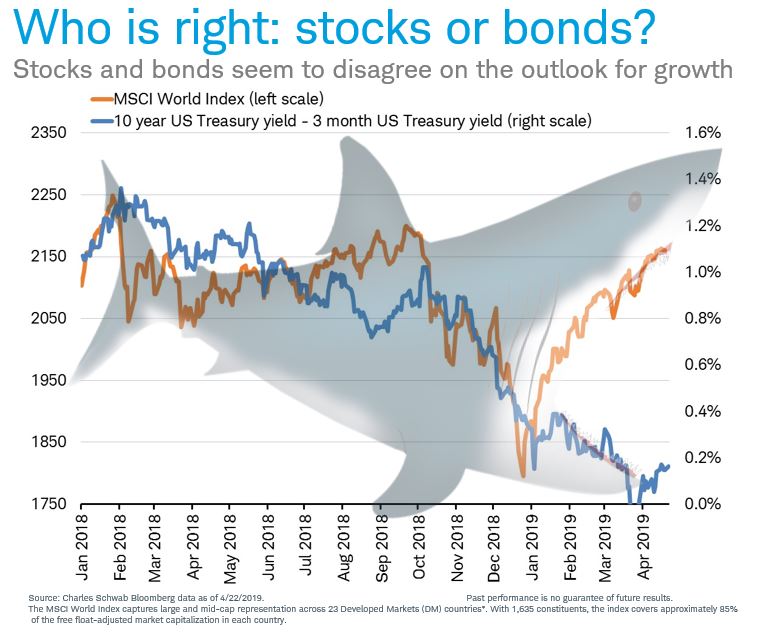 In the yield curve chart, the blue line is the current status (April 2019) while the black line represents April 2018.  Last year’s yield curve was steeper as the 10-year note’s yield was around 3% while the short maturities were close to 1.5%.  Currently, both are around 2.5% and there is inversion from the short end to the 3 – 5 year maturities.  While inversion to the 3 to 5 year time frame doesn’t fit the classic recession red flag, it is disconcerting. 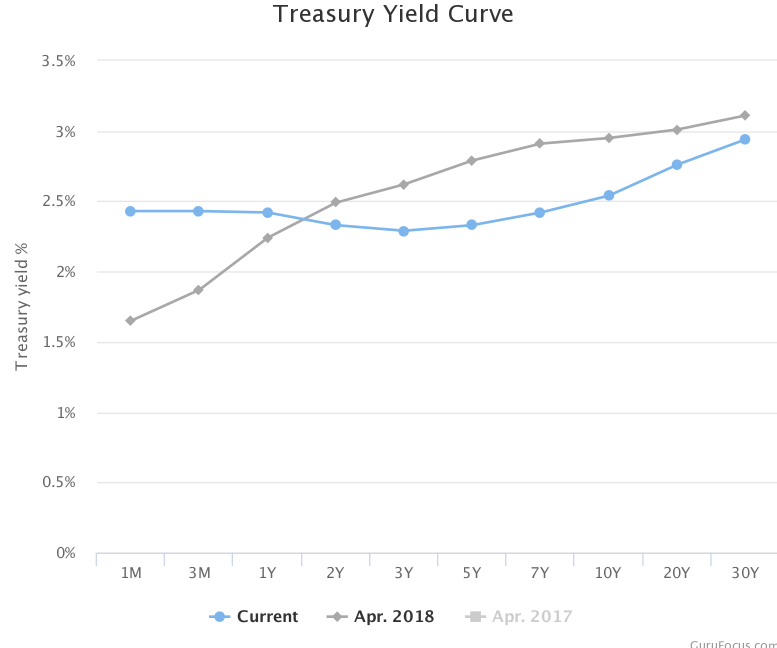 Obviously, corporate earnings are another indication of economic activity and, in this area, there are clouds forming.  Below is chart that shows the S&P 500 vs. the 2018, 2019, and 2020 consensus earnings estimates for the index.  Note how all three lines moved higher throughout last year.  But, as you can see, profit estimates plunged in January 2019 as shown by the light blue line (2019) and the red line (2020).  Yet in the face of these falling forecasts, stocks prices moved higher.

A silver lining could the separation of prices and estimates in 2017.  As shown, the S&P 500 steadily moved higher during 2017 while S&P 500 earnings expectations lagged.  Forecasts rebounded at the end of the year helped by the passage of the Tax Cuts and Jobs Act of December 2017. 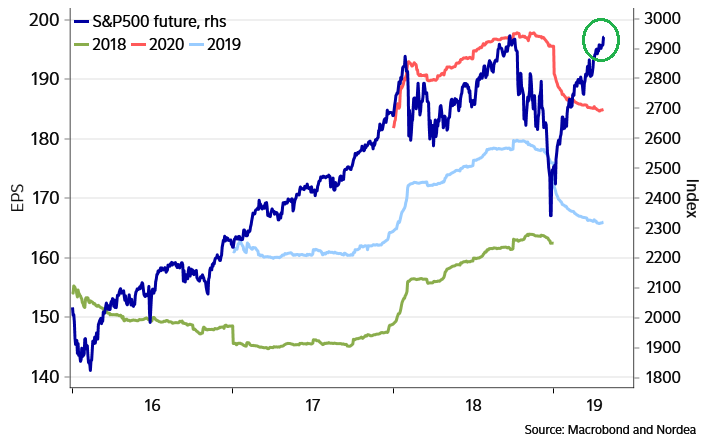 Given these blemishes, some may call it whistling past the graveyard.  But there is no question that the stock market has had a historic rally since the beginning of the year.   The S&P 500 and the Nasdaq have only had 2 weekly declines in 2019.  In addition to its size, the rally has been steady with only a handful of 1% daily moves (up or down).  This is where the major indexes stand at the end of last week.

As covered above, there are some reasons to question 2019’s stock market rally.  However, there are two sides to every trade and the bulls are not completely delusional.  The job market is at the strongest level in history.  Last week 1st quarter GDP was estimated to be growing at 3%.

But there are three additional themes that the bulls are relying on to keep the markets moving.  1). The Fed won’t be raising interest rates.  2). China trade deal gets done. 3). Second half of the year earnings growth.

The Fed’s sudden reversal regarding monetary policy is the biggest reason for December’s bottom and 2019’s surge.  Prior to the flip in early January, investors were debating over the number 2019 interest rate increases of between 2 and 4.  Now the expectations are for no increases with the talk of a possible cut.  It seems strange to be cutting interest rates with stocks at record highs but there are a lot of peculiar things going on.

A China trade deal is a highly anticipated development for the financial markets.  The belief is that once a deal is done it will release some delayed activity and set the path for further growth.  A deal likely gets done however, given all of the hype, the markets could easily be disappointed.

The second half earnings recovery is contingent on the other two.  Any profit expansion would require a friendly Fed.  And with the world so intertwined, a trade deal between the two largest economies would help the global system.

The U.S. financial markets have rebounded from last year’s 4th quarter turmoil.  The return to all-time high levels has not been accompanied by strong economic data and there are some significant soft patches in the global landscape.  This has led to some conspiratorial questions concerning the stock market’s move.

Everything may work out as the year unfolds but there are risks that might derail the current optimism.  And if things start to unravel, the economic support is not at the same level as last year.  This would cause the rosy expectations to quickly sour.   The result would be a situation that requires another Mueller investigation.