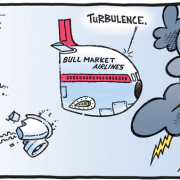 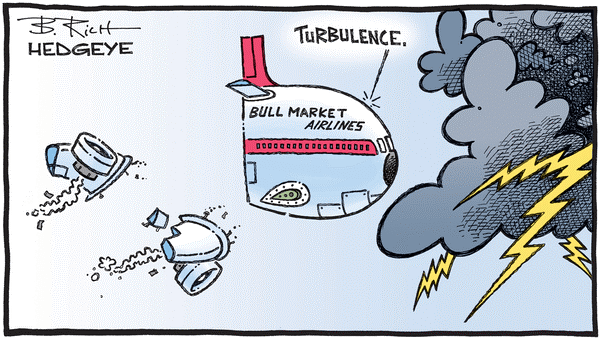 Wall Street, up for almost any challenge, took on one of the country’s toughest issues by trying to narrow the income gap.  As most know, traders, brokers, investment bankers and others that work in finance are not normally associated with transparency, forthrightness, and caring for others.  Last week, however, Wall Street, putting its self-interest aside, did its best to help the public good by tackling one of society’s biggest issues and reduced the wealth gap.

It was a top down tightening as the country’s wealthiest high-profile business leaders took a big hit to their net worth due a stock market plunge.  As reported by The New York Post (February 28, 2020), our country’s 5 wealthiest people lost a combined $36.5 billion last week.  Amazon’s CEO, Jeff Bezos, led the way by losing $11.7 billion in the 5 trading days as Amazon’s stock plunged over 10%.  His remaining net worth is estimated to be $116 billion.

The second biggest loser was Bill Gates who lost around $5.7 billion but will have to make do with the remaining $112.6 billion.  Bernard Arnault, the head of luxury goods company LVMH, saw his net worth fall below $100 billion as he lost $6.6 billion.  Other notables suffering setbacks included Warren Buffett (Berkshire Hathaway), Mark Zuckerberg (Facebook), and Elon Musk (Tesla).

This effort to try to fix one of our biggest challenges is a noble exercise.  Especially when it runs contrary to one of the goals of the finance industry – making people as rich as possible.  This display of altruism could lift Wall Street’s reputation well above others in the sewer of the public’s opinion which includes politicians and journalists.

Indeed, it was historic week in the financial markets.  Bonds yields fell to record levels and the stock market suffered its worst week since 2008.  Crude oil and many commodity prices tumbled while gold rallied.  Since the stock market highs on February 19th, the major averages have lost almost 15% by the end of the month.

The Dow Jones Industrial Average had two daily painful plunges of over 1,000 points last week (February 24th 1,031 points and February 27 1,190 points).  There is an investment adage that describes stocks taking the stairs higher and an elevator down.  To this point, the S&P 500, by the end of last week, lost 4 months of gains in just 7 trading days.

Here are the major averages loses for last week and for the first 2 months of 2020.

Uncertainty over the impact of the Coronavirus is the chief reason for the markets’ turmoil.  The economic harm will be supply chain delays and disruptions which will reduce industrial output.  ‘How much global damage’ and ‘for how long’ are two major unknowns.  In a world where the knee bone is connected to the thigh bone and the global commerce is so intertwined, the fallout could be far reaching.

These unknowns are developing within a backdrop of record levels of debt and overvalued asset prices.  Below is a chart of corporate debt (not including financial companies).[i]  We are near record levels and, importantly, there is much more debt than the mid-2000’s which contributed to the financial crises.  Critically, this debt must be serviced (interest payments made) regardless of the business conditions.  It’s a potential day of reckoning for weaker businesses. 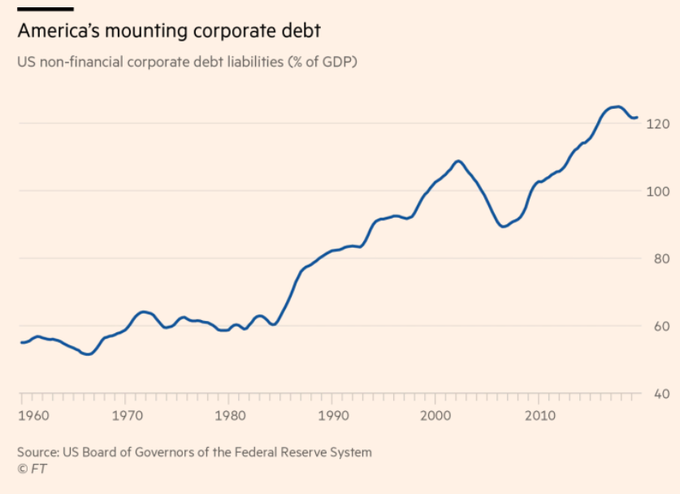 Keep in mind this chart does not include government and personal/consumer debt.  Total federal government debt has more than doubled in the past 12 years and continues to grow.  Consumer debt levels have also swelled include auto loans, student debt and credit cards.  This is a lot of weight for the global economic system to carry.  If conditions get tight and defaults start popping up, it might lead to a domino effect that ripples outward.

The stock market’s banner year in 2019 contained some blemishes.  Of course, with stocks up more than 25%, they were easy to overlook.  One of the biggest involved the lack of corporate earnings growth.  The S&P 500 earnings grew 0.9% in 2019 compared to a 5-year average of 6.4%.[ii]  Since earnings didn’t keep up with prices, we have elevated stock market valuations. 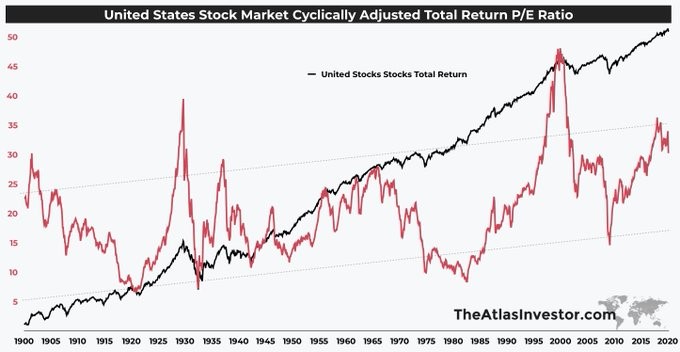 Here is a chart plotting the total return of the U.S. stock market (black line) and the cyclically adjusted P/E ratio (red line).[iii]  The current P/E multiples have only been exceeded by the Dot Com bubble and the time leading into the 1929 crash.  To be sure, stock valuations have been high for the past year without causing any problems.  However, when a slowing economy is added to the equation, valuations can suddenly become a problem.  This could be a headwind until earnings growth begins again (which might be a while).

As stocks got sold, Treasury bonds got bought.  Yields on government bonds plummeted to record levels.  The 10-year note closed last week at 1.12% while the 30-year bond fell to 1.67%.  Both represent record low levels and illustrate a panic move to safety.  Furthermore, it’s interesting that those buying treasury bonds last week don’t appear to be concerned about interest rates moving back up because of a strong economy.

While the financial market turbulence is blamed on the Covid-19 virus, it is being magnified by years of central bank market manipulation.  The Fed, European Central Bank, and Bank of Japan have held interest rates down by printing money and buying bonds.  This has distorted asset prices higher.

Interest rates are one of the most important parts of a financial system.  They assign a price to capital as well as the return for those who invest.  They have been rigged for many years and the current stock market tumble along with the interest rate collapse could be the beginning of a correction of this market interference.

Obviously, selloffs make the market harder to figure out.  Often it is not the headlines that move prices but other less clear factors.  This could be the levels of debt the system is looking at.  The overall market regime is changing, and this may take more time to resolve.  In the meantime, Wall Street may temporarily be supporting Bernie Sanders by eliminating all the billionaires.