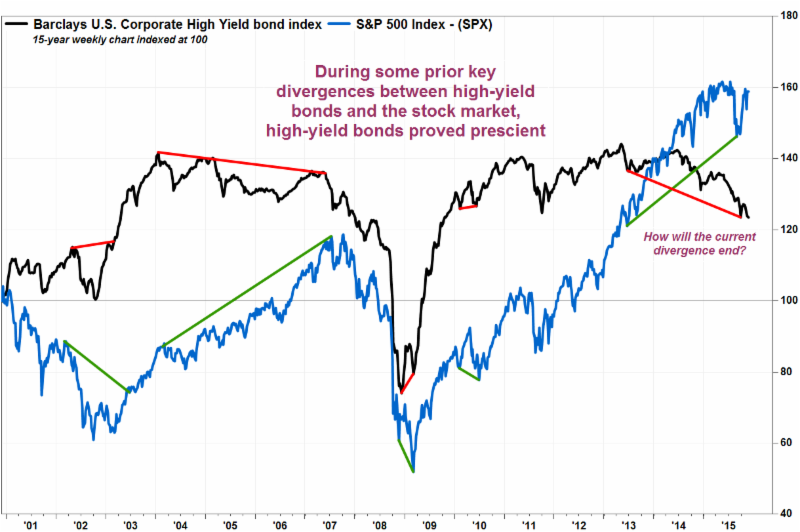 This chart clearly shows a divergence since the beginning of 2014.  We would expect this to be resolved – either the S&P 500 declines towards the Barclay’s Index or the high-yield index climbs back to the S&P 500’s level.  Of course, there is the possibility that the correlation has been broken and the divergence widens but 15 years of data would favor convergence.
Below is a table with some specific closed end bond funds.  It gives an overview on four high-yield funds.  Also there is a fifth fund (AllianceBerstein Income Fund) that focuses on Treasuries.  It is included because of some unique recent developments.  Specifically, the closed-end fund (symbol ACG) is being acquired by the AB Income Fund (an AllianceBerstein mutual fund).  This has forced a narrowing of the gap between ACG’s price and its NAV (recently below 2%).  But a 4.9% dividend is available until the deal is closed later this year.
Similarly, The Deutsche High Income Trust recently announced that they are terminating the fund and liquidating the assets.  Upon shareholder approval, it is expected to be completed by November 30, 2016.  This decision was driven by an activist shareholder – Saba Capital Management LP. While the spread between price and net-asset-value has narrowed, it remains approximately 7%.  We would expect this to gradually shrink as the fund begins returning capital to shareholders.  Add this to the 7% dividend yield and you get a pretty compelling total return.
The two Blackstone sponsored funds have a different type of catalyst – since their inception they have a scheduled liquidation.  The Floating Rate Fund (symbol BSL) has to be liquidated and the funds returned to shareholders by 2020.  The Strategic Credit Fund’s has a longer stretch before its liquidation date – 2027.  Notwithstanding other bond market problems, these funds should see their discounts to its net-asset-value contract.
[i] Ibid
[ii] Ibid 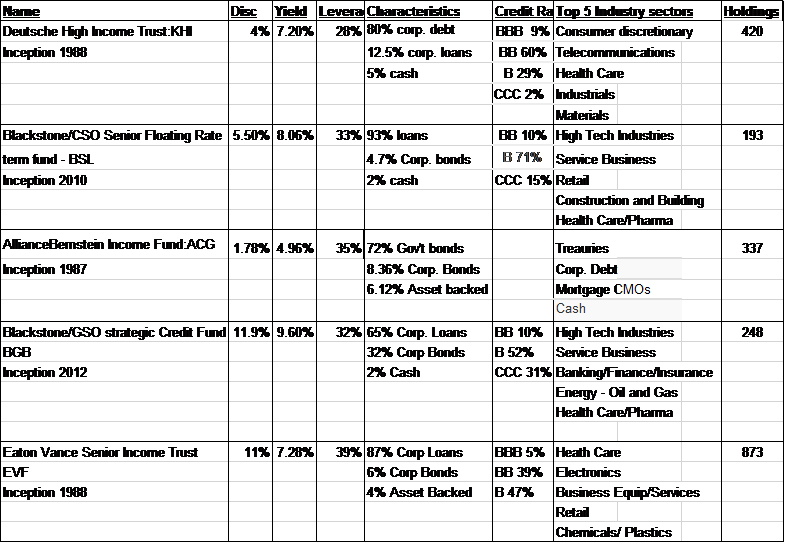 [i] “A Tale of Two Cities”, Charles Dickens
“We Were All Going Direct to Heaven, We Were All Going Direct The Other Way”[i]
Charles Dickens’ words seem applicable to our stock market, but provide little help in predicting its future directions.  Investor sentiment has improved from the pessimism of the start of the year.  Some of the worries over systemic issues have been reduced.  Also, U.S. economic growth seems be continuing although at lower levels than previous expansions.
Nevertheless, the challenges facing global economies and markets are not insignificant and its far from clear that the emerging markets contractions and developed countries negative interest rate policies won’t negatively impact our economy.  The bottom line is that there is still a great deal of risk and uncertainty.
In an effort to provide stability and return, closed end funds focusing on the high-yield bond market, might part of the solution.  As explained above, both these bonds and these closed end funds have unique risks that must be considered.  However, recent declines in the price of the bonds as well as the discounts to net-asset-value within the closed end funds offer a margin of safety.  Please contact us with any questions.
[i] “A Tale of Two Cities”, Charles Dickens
Mr. Kerr is an Investment Advisor Representative of advisory services offered through Kildare Asset Management, a Registered Investment Advisor.
The opinions voiced in this material are for general information only and are not intended to provide specific advice or recommendations for any individual. Past performance is not indicative of future results. Investing involves risks, including the risk of principal loss. The strategies discussed do not ensure success or guarantee against loss. This information should not be construed as investment, tax or legal advice and may not be relied on for the purpose of avoiding any Federal tax penalty. The Dow Jones Industrial Average is a price-weighted index of 30 actively traded blue-chip stocks.  The Standard & Poor’s 500 (S&P 500) is an unmanaged group of securities considered to be representative of the stock market in general. It is not possible to invest directly in an index.  Trading of derivative products such as options, futures or exchange traded funds involves significant risks and it is important to fully understand the risks and consequences involved before investing in these products. All information is believed to be from reliable sources; however we make no representation as to its completeness or accuracy. All economic and performance data is historical and not indicative of future results. Market indices discussed are unmanaged. Investors cannot invest in unmanaged indices. If assistance is needed, the reader is advised to engage the services of a competent professional.
http://kerrfinancial.com.c1.previewmysite.com/wp-content/uploads/2017/12/kerr-logo.jpg 0 0 spowell http://kerrfinancial.com.c1.previewmysite.com/wp-content/uploads/2017/12/kerr-logo.jpg spowell2016-03-18 17:07:192017-12-18 17:07:42"It Was the Best of Times, It Was the Worst of Times"[i]