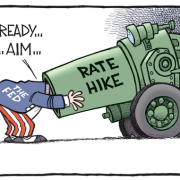 The stock market has been on a historic run since the election. A steady series of record highs in spite of a landscape of protests, name calling, and divisiveness. Given the elevated level of widespread acrimony, one would logically expect stocks to be broadly lower instead of at all-time highs. Nevertheless, there hasn’t been a meaningful correction since the before the election. Two weeks ago, the major averages had their largest weekly loss of 2017 and it was first time the S&P 500 had a down week in a month and one-half. It also ended a seven-week winning streak for the Nasdaq and four consecutive advancing weeks for the Dow.

The averages got back on the winning side last week thanks to a spike higher on Wednesday afternoon after the Federal Reserve’s increased the federal funds rate 25 basis points. Since a rate hike was widely expected, this decision was discounted. Instead, the rally was driven by dovish comments by Janet Yellen concerning future rate increases. The market had begun to fear four increases in 2017 which could push against economic growth. But, after Wednesday’s press conference, the markets are now expecting only two more in 2017 (three total for the year).

Of course, higher interest rates result in increased borrowing costs and lower profits. Not the typical recipe for a good stock market. Furthermore, higher interest rates result in lower present values of future cash flows i.e. lower asset prices. However, past Fed tightening cycles have not always translated into troubled markets. The table below shows the returns for stocks, bonds, and cash during past periods that the Fed was increasing interest rates.[i] Surprisingly, these asset classes do quite well during rising interest rates. As can be seen, stocks averaged a gain of +21.61% during the 15 cycles since 1958. Even fixed income and cash have historically done well, +5.77% for bonds and +10.26% for cash. Maybe the markets’ current worries are focused on the wrong area – it wouldn’t be the first time.

The danger of rising interest rates might increase after the last rate hike. Below is another table showing the average returns for stocks, bonds, and cash after the last rate increase of a cycle.[i] As can be seen, the average returns one year after the cycle ends are much lower for stocks and cash (+8.79% and +6.71% respectively) but better for bonds (10.08%). The average annual returns for the five years after the end of the cycle is 10.79% for stocks, 9% for bonds and 5.77% for cash.

A couple of notable and worrisome numbers are the returns after the last two tightening cycles. Stocks did poorly after both examples down 14.83% in 2000 and down 13.12% in 2007. Of course, these were the bursting of the tech bubble and the beginning of the financial crisis, but it causes one to wonder if another bout of higher interest rates will lead to another crisis.

We reached another stock market milestone two weeks ago – the 8-year anniversary since stocks bottomed in March 2009. Much has changed in 8 years. First, investor psychology is very different. It hasn’t traveled the typical journey from deep bearishness to widespread optimism. Instead there remains a general mistrust of the capital markets combined with the begrudging acceptance that some level of exposure to the stock market is required.

This mistrust is an extension of a lack of confidence in our financial leaders and regulators. One of the reasons the Federal Reserve was created was to prevent these types of meltdowns. Yet we suffer through a stock market bubble followed by a systemic crisis and the central bank’s response is more of the same approach that led us into these messes. The public recognized that money printing in the form of programs such as TARP and QE together with lowering interest rates was the same old stuff and they didn’t trust it. The markets eventually stabilized but it’s debatable whether the reason was central bank policy or the internal, self-clearing market mechanisms.

Another notable difference between March 2017 and March 2009 is the composition of leaders. There are several currently popular stocks that weren’t around 8 years ago. Facebook came public in May 2012. Tesla’s IPO was June 2010. Other significant IPO’s during this time period were Twitter (November 2013) and Alibaba (September 2014). At a minimum, this shows that the markets continue to evolve and move forward.

Events over the past year give pause to confident predictions and using history as a guide to the future. Maybe this will be one of those rare years where the first 50-day rally fizzles. Furthermore, the current landscape in Washington looks to be changeable. Given that much of the Trump rally has been driven by anticipated changes in tax code and business regulations, the markets could be susceptible to disappointment if there are delays or cancellations of this agenda.

Add to these crosscurrents and confusion the fact that the Federal Reserve will be raising interest rates again later in the year. Then mix in the valuation backdrop of a pricey stock market at all-time highs and we have markets that could use a correction. In the short term, we have end of the 1st quarter approaching which is normally supportive of equities. Perhaps we get a pullback next month. If that happens it could recharge the bulls for another leg higher. Of course, this assumes the economy strengthens and Washington pushes through the expected changes. This promises to be an interesting year. 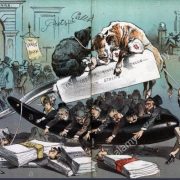 The Trump presidency and the stock market are two perplexing affairs. Given their developments during the past few months, they would be fascinating on their own. Stocks reversed direction the day after the election and have rallied strongly as the Dow surpassed 20,000 and then 21,000. On the other side, the new administration has had an equally unique trip. Twitter has become a news outlet, executive orders are implementation devices, and no one knows what news is real or fake.

And while they are separate and independent (kind of), the stock market and the White House have had an undeniable connection since Donald Trump became President-elect. Naturally, the markets are more closely watching the president then the other way around. Investors are scouring the news wires looking for nuggets that will lead to economic growth. The latest example was last week’s Congressional speech which led to an explosive move on Wall Street the next day. All the major averages closed at record highs.

The speech didn’t contain much detail as there weren’t specifics concerning programs or initiatives nor a timeline for enactment. Yet it was enough that the indexes rallied more than 1% which was the first time this happened in the last 55 trading days. Here are the where the major indexes closed the week.

The Dow has risen through three 1,000 point levels since the election – 19,000, 20,000 and, as of last week, 21,000. And while prices are up, there has not been the commensurate increase in earnings. Below is a graph of the S&P 500’s trailing P/E[i]. As can be seen, history shows other times of higher valuations, however, it will be important to see an acceleration of earnings. It would be much nicer to see this blue line move lower because the “E” is larger rather than the “P” getting smaller.

Turning to the numerator in the P/E equation, 63% of reporting companies “beat” earnings forecasts in the 4th quarter. This was higher than the third quarter number and toward the upper end of the range for the past several years. The “beat” rate on revenues was 57% which was also higher than the previous quarter and the highest in two years. Further progress for sales and earnings would be important support for stocks. Certainly, valuations could move higher, but as the chart shows, valuations don’t stay elevated for long.

Social media has become a central part of our culture. Presidential tweets, Facebook followers, and LinkedIn connections are now part of our routines. Wall Street, always trying to help (and make a buck) brought Snapchat public last week. In addition to fees on the deal, the investment bankers deserve a round of applause for the timing of the deal – the day after the markets close at all-time highs. We’d bet that they’ll be OK with the fees if they don’t hear an ovation.

SNAP IPO’d at $17 per share which was above the expected range of prices. It began trading around $24.50 and moved as high as $26 or 53% above the offering price. At the close of the first day of trading, the company was valued at $28.3 billion. To put this into perspective, Snapchat had a higher valuation than all but 173 companies in the S&P 500. This includes such organizations as Tyson Foods, American Airlines, Hershey, Yum! Brands, Molson Coors, Dollar General, Expedia, T. Rowe Price, Viacom, DR Horton, Chipotle, and Macy’s. Maybe social media companies are more valuable than struggling retailers (Macy’s and Dollar General) and restaurants (Yum! Brands, and Chipotle). Or maybe Snapchat can figure out how to fix their problems[ii].

Moving from stocks to fixed income, bonds got a punch in the nose last week. Multiple Fed heads were on the speaking circuit at the end of last week and they were unanimous in calling for a rate hike. The FOMC meets next week with a decision on Wednesday (the Ides of March).

Prior to these appearances, the market had only assigned a 33% probability for an interest rate increase in March. That moved to 88% by the end of the week. The 10-year Treasury note’s yield closed last week at 2.49% which was a jump from 2.32% the prior week.

It seems that many are worried over the Federal Reserve raising interest rates. The problem with this mindset is that the markets have already moved. Below are yield curves from last month, November and one year ago[iii]. The long end of the curve has clearly moved higher and, as the November and February 2017 yields are so close, this happened well before the much-ballyhooed December increase. The short maturities, the spot that the Fed can control, have not moved as dramatically. Until last week.

The three-month U.S. Treasury bill, which began the week at 50 basis points, spiked to 70 basis points by the end of the week. This is not a normal move for the short-end of the fixed income market. There was no immediate fall out last week, but it could be the start of increased volatility throughout the fixed income markets. This has potential to be an economic headwind as higher interest rates across the curve could increase corporate borrowing costs.

The combination of elevated valuations and rising interest rates aren’t typically part of the equations that lead to higher asset prices. However, the Trump Administration is teaching everyone that the old rules are subject to change. Wall Street, which encompasses plenty of fickle emotions, could change their view of things at any time. If, for whatever reason, support for the Trump Trade decreases, the capital markets could shift to a more volatile backdrop. However, unless signs of a recession start to appear, any pullback in prices should be contained. It could result in a much-needed correction with attractive entry points for investment capital. Or it could result in monthly Congressional addresses by President Trump.