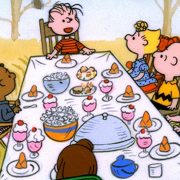 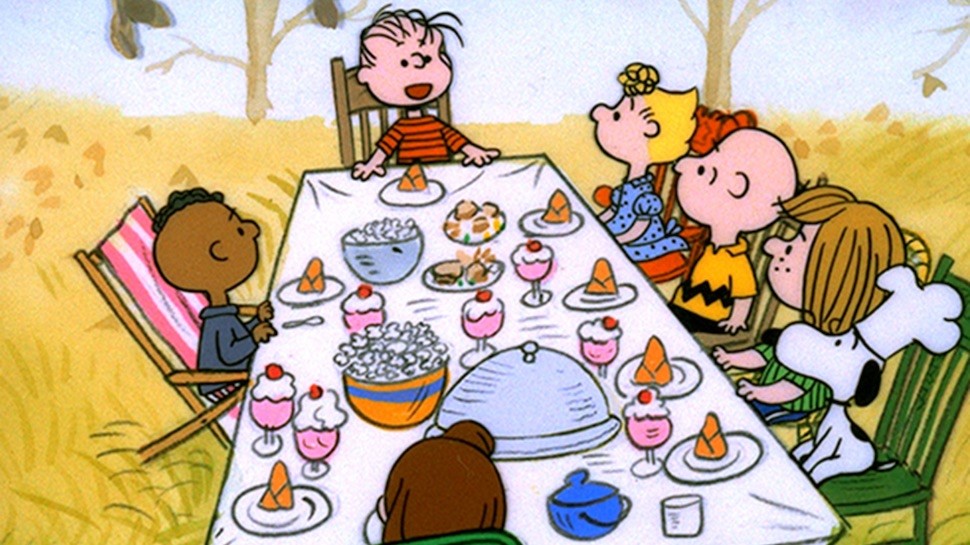 Wall Street has much to be thankful for.  The stock market is having a great year.  Fees from IPO’s, mergers, and deals are ringing the cash registers.  Corporate earnings remain good.  The Fed has returned to cutting interest rates and pumping money into the system.  And presidential tweets still move the market higher.

Just in time for Thanksgiving, all three major indexes finished the week at all-time highs.   In late October stocks broke out of a trading range that dated back to the spring and climbed to new records.  Friday was the 7th record close in November and the 22nd for 2019.

The stock market momentum has caught many off guard as concerns about impeachment, global protests, and some slightly softer economic data increased skepticism.  In addition to being unexpected, the move has been widespread with international stock markets rallying too.

As a part of these records, the Dow Jones Industrial Average closed above 28,000 for the first time.  It’s only been 4 months since it crossed 27,000. Of course, the percentage move required to move 1,000 point Dow points is much less at large numbers and it only needed a 3.7% move above this threshold.  Below is a chart showing the moves between 1,000 point increments for the Dow.  It also gives the percentage between the milestones.[ii] 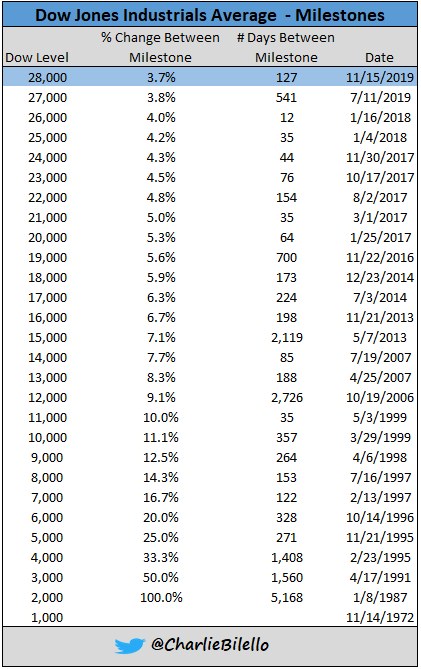 As a painful reminder, 1,000 milestones aren’t always easy to hurdle even when it represents a small percentage move.  For example, it took almost 6 years for the Dow to move from 14,000 to 15,000 (a 7% move) as the financial crisis ravaged the markets.

Expenses can be managed and adjusted which can help make the bottom line hit the quarterly forecast.  Revenues aren’t as easy to massage so investors closely watch these numbers as well.  In the 3rd quarter, 57.9% of the companies beat their sales estimates.  This is a higher rate than the 1st and 2nd quarter but lower than the high numbers in late 2018 and early 2019 when almost 70% of reporting companies were exceeding their revenue estimates.  If the outlook for corporate earnings remain positive, stocks should continue to push higher.

Here are the year-to-date returns for the major averages.

Unlike Thanksgiving, this rally has global participation.  International stock markets are having good years and are moving higher with the U.S.  The major indexes in Australia, Canada, France, Germany, and Japan are all near 52-week highs.  Among developed economies, the United Kingdom and Spain are positive for 2019 but behind the returns from other markets.

While there are not many turkeys in the developed international sector, not all of the emerging market sector have enjoyed the rally.  Russian (up 35%), Brazilian (up 21%) and Indian (up 12%) investors are thankful, but some markets are not so rewarding.  Chile is down 7.4% this year and Hong Kong is ahead by less than 2%.

Returning to the U.S., Black Friday, the second uniquely American holiday in November, is upcoming.  This official start to Christmas and holiday shopping is late this year as November 2019 has 5 Fridays.  This has some retailers worried about the decreased number of days between Thanksgiving and Christmas.  Given that smartphones and computers are strong alternatives to driving to a store, it would seem that there will not be a shortage of time.

Below is a chart showing the growth of “clicks” and the decline of traditional buying of general merchandise.[iii]  From the peak around 2009, “bricks” shopping has been in a steady decline and was overtaken in recent years by the online purchases.  These trends are likely to continue as retailers have widely invested in their online experience and shoppers are comfortable using their phones and computers for shopping. 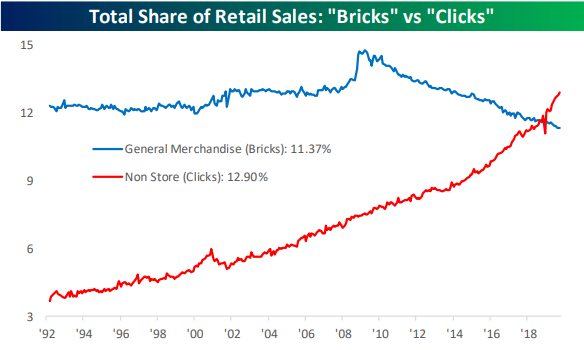 In a report last week, retail sales rose 0.3% in October which reversed a drop in September.  It signaled increased confidence in the U.S. consumer which is a large part of the economy.  This is a welcome sign for 2019’s holiday shopping and could drive further overall economic growth.  It could easily continue in 2020.

The bulls have much to be thankful for.   It’s been a great year and the recent breakout for U.S. stocks likely signals the direction for the rest of 2019.  That’s not to suggest it will be a smooth, steady climb but it appears that the downside is limited.  Furthermore, professional investors who are underperforming the indexes will be anxious to use any pullback as an opportunity to put money to work.

On the other hand, the bears, naturally, aren’t so grateful.  To be sure, there will come a time when they will be on the right side of the markets.  But in the meantime, let’s hope they can enjoy some turkey and watch some football.