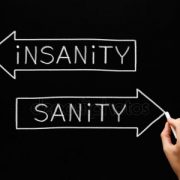 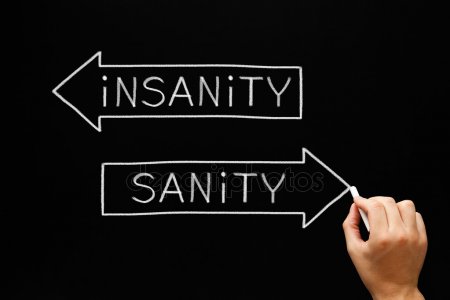 “Some Are Born Mad, Some Achieve Madness, and Some Have Madness Thrust Upon ’em.”[i]
―

Each of the over 60 college basketball games in this year’s NCAA tournament has to be a triple overtime, buzzer beating last second shot in order to compete with the other madnesses of March.  In fact the basketball tournament, with all of its excitement and suspense, could not crack the first 10 spots of the 2019 Billboard Top 40 of insanity.

Some of the madness is not new.  Such things as the BREXIT negotiations and negative interest rates have been with us for some time.  But the new lunacy is breathtaking.  The college admissions bribery scandal, the Green New Deal, the Jussie Smollett case, Modern Monetary Theory, the Robert Kraft scandal, the Mueller report, Jerome Powell’s pivot and an inverted yield curve.  The list is historic.

And as tempting as it is to comment on the non-financial, the focus will be on the issues demonstrating financial madness.  To start, as we know, the capital markets are influenced by many emotions including euphoria, despair, and, of course, madness.  As emotions become stronger, they can outweigh logic and lead to insane decisions.

Some recent head scratching developments could have a long lasting impact.  For example Fed Chairman Powell quickly changed his stance on interest rates and monetary policy in late December and early January.   In what is being called the “Powell Pivot”, he switched from a path of steady interest rate hikes and tighter monetary policy to an accommodative stance.  This curious flip has many wondering what is going on.

Usually the journey from tight monetary conditions to an accommodating landscape are because of soft economic data.  While there were signs of economic weakness this time, they were mainly outside the U.S.  Domestically, the economy had a very strong 2018 but growth appeared to slow some late in the year.

In addition to being driven by economics, normally Fed changes are both gradual and widely telegraphed.  The markets generally know what the Fed is thinking and are rarely caught off guard.  The “Powell Pivot” was neither gradual nor telegraphed.

Without the typical conditions and mechanics for a switch in Fed policy, markets were a little hesitant.  But once traders concluded that the Fed was on hold for future interest rate increases, it was buy first and ask questions later.  It resulted in a strong rally and one of the best quarters in years for the stock market (more on this later).

Nevertheless, Federal Reserve critics questioned the motives behind Powell’s decision.  Many in the markets conjectured that it had nothing to do with the central bank’s two stated objectives (price stability/inflation and employment).  Instead it was widely thought that it was entirely in response to a declining stock market as prices tumbled 20% in the 4th quarter.

Of course in today’s fluid moral system, the ends (a higher stock market) justify any means.  This also helps to explain the support for Modern Monetary Theory (borrow and print as much money as needed for federal spending because the consequences are limited and controllable) which has become popular with the socialists in the Democratic Party.   Skeptics (of the Federal Reserve and Modern Monetary Theory) believe these approaches are reckless and that there is a price to pay for such decisions.

Another risk in basing monetary policy decisions on the stock market is that the economy might not respond and corporate earnings might lag.  In other words, if the economy and earning don’t continue to grow later this year, the 1st quarter rally could abruptly reverse course.

Another example of financial market madness involves the U.S. Treasury yield curve.  The yield curve is a graph that plots the bonds yields compared to their maturity.  The normal shape is from lower left to upper right because longer maturities usually command a higher interest rate to compensate for greater uncertainty associated with longer time periods.

By historical standards, the spread between the shorter maturities vs. the longer maturities has been very narrow over the past year.  Two weeks ago the curve inverted causing much wailing and gnashing of teeth as inversion often precedes a recession.  The bulls pointed out that this indicator is not 100% accurate and that the average lead time from an inversion to a recession is around 9 months.

Nevertheless, this yield curve indicates economic abnormalities.  Two obvious conclusions are that the Fed is too tight and short term yields are too high.  Or the economy is weak and there is limited demand for long term capital.  If either or both are the cause, the financial markets could be in line for a correction.

And despite the short term stock market gains, there is the possibility that the chairman of the Federal Reserve panicked.  This could lead to loss of confidence the next time something really bad happens or when we fall into the next recession.

An inverted yield curve is not the only madness in the fixed income markets.  Bonds trading at negative yields is another aspect of this market’s mental illness.  As shown in the graph below, $10 trillion of global debt have negative yields.  Another remarkable point is that only once in the past few years has the total of negative yielding securities been below $6 trillion.  This is zanier than Robert Kraft and Jussie Smollett added together! 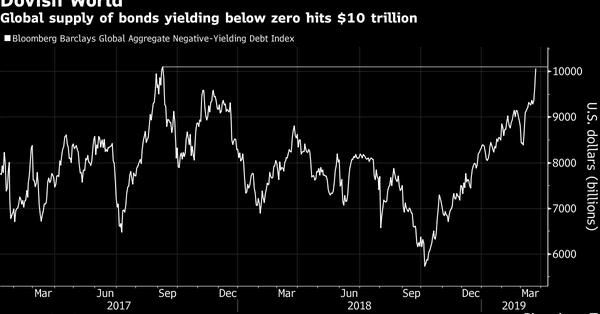 The stock market, often at the center of financial lunacy, seemed unfazed by the madness in the markets, culture, and government.  Maybe all of the craziness helped make equities look like an appealing island of tranquility.  The S&P 500 had its best 1st quarter since 1998 while it’s the best start for the Dow Jones Industrial Average since 2013.  Here is how the major averages performed in the 1st quarter.

The stock markets have rebounded from December’s lows and finished the quarter just below record levels.  Under normal conditions, a strong start to the year leads to further gains.  But 2019 has not been normal.  Given the sudden policy flip by the Federal Reserve and an inverted Treasury bond yield curve, financial history may not repeat itself.

Nevertheless, stocks are trading well.  The optimism over equities is based on a trade deal with China, a second half of the year economic pick-up, and continued Federal Reserve support.  If anything derails these expectations, more madness may develop in the financial markets and it could painful.   As for lunacy outside the financial markets, that looks like a strong bull market and it might be just starting.