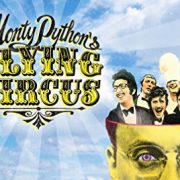 In the 1970’s the British comedy group Monty Python’s Flying Circus produced a half hour long show that was broadcast in England and eventually made it on to U.S. television.  This was the stone age of television when viewers’ only choices were ABC, CBS, NBC and the public stations.  No cable, no ESPN, no CNN, and no FOX.  (How in the world did we know what to think??)  With such small distribution options it was remarkable that it got picked up.  Just the same, putting it on Sunday night at 11:00 on public TV (its show time and channel) was the equivalent of not getting air time.

Despite this obstacle, the troupe developed a cult following with their sketches that included topics such as dead parrots, Spam, and lumberjacks.  Many early episodes began with John Cleese in a black suit seated behind a desk which was in an outlandish place – zoo cage, in shallow water at the edge of the ocean, or suspended in air.  He would open the show by saying, “And now for something completely different”.

The reason behind this nostalgic tangent is that the capital markets, like Mothy Python, are acting “completely different”.  And it’s important that investors recognize this change, try to understand the causes, and make necessary adjustments.

To review where we’ve been, during the past several years, the markets were heavily supported by the Federal Reserve asset purchases (bond buying) and suppressed interest rates.  As traders came to understand this landscape and gained confidence in the fed, the result was a steep decline in volatility and steady increases in assets prices.

This is especially true since the bottom of the February 2016 correction and resulted in record calm during 2017.  Unfortunately, all good things come to an end and 2017’s tranquility has been replaced by its arch enemy – volatility.  This began when U.S. stocks hit an air pocket in the beginning of February and the Dow Jones Industrial Average and the S&P 500 both fell over 10% in ten trading days.   Indexes bounced in back during the second half of February but the sellers returned and stocks lost over 5% two weeks ago and closed near the February lows.

Equities bounced last week but are still around 8% below the records reached in late January.  Looking at the first quarter, the Dow and S&P 500 posted their first losing quarter in two years while the Nasdaq was up.  Here is the 1st quarter performance for the major averages.

Nobody expects the Spanish Inquisition and few expected the stock markets’ tumultuous 1st quarter.  It’s unclear whether there was a specific cause behind the fall or whether stocks were simply overdue for a correction.   Of course, it’s likely a combination of both.  Some of reasons offered for the selling include rising federal deficits, chaos in Washington, trade wars, geo-political tensions, and central bank tightening.

At a minimum, there are some important changes in the financial landscape and this could have had a large influence on the markets.  First, interest rates have risen.  Last month the Fed raised the overnight interest rate to 1.75%.  It was the 5th rate hike since President Trump was elected.  More importantly, investors are pricing in several more rate increases in 2018.

Other interest rates have moved higher too.  LIBOR (London Inter-Bank Offered Rate), which is another short-term rate, is at the highest level since 2006.  Below is a chart of 3-month Libor (the Libor interest rate for 3 month borrowings) which covers the past 10 years and shows the recent jump. There is no honor among thieves and, as the chart shows, apparently very little among bankers in times of financial stress.  3-month LIBOR spiked almost 100% amidst the failures of Lehman Brothers and Bear Stearns as it was every man and woman for themselves.  After the dust settled and the Fed got done fiddling as Rome burned, counterparty risk collapsed as central banks flooded the markets with money.

As can be seen, 3-month LIBOR scrapped along a floor of 20 to 40 basis points for 6 ½ years.  It rose above 50 basis points in 2015 and jumped from 1.2% to 2.2% during 2017.  This may appear to be a somewhat insignificant move but to economies that have become hooked on low rates and monetary easing, this is a big deal.  One of the ripples in this interest rate pond is that adjustable rate loans become more expensive for borrowers some of which probably can’t afford higher expenses.  Given that the Security Industry and Financial Markets Association reports that corporate debt is at all-time highs ($8.83 trillion), rising interest rates are a problem.

As noted, interest rates have been moving higher for over a year.  A more recent change is a new Federal Reserve chairman as Jerome Powell replaced Janet Yellen.  The new sheriff in town comes with a new view.  According to recent congressional testimony, Fed Chairman Jerome Powell said the stock market isn’t the Fed’s focus.  According to The Wall Street Journal, Mr. Powell told the House of Representatives that “We don’t manage the stock market” and “I think the general thing is that the stock market is not the economy”.  He admitted that the markets are important but not central to the organization’s decisions.  (The Wall Street Journal, February 27, 2018).

While the markets are aware of the Federal Reserve’s “dual mandate” (price stability and employment growth), traders have long believed that they also kept close watch on the financial markets especially the stock market.  If stocks approached any level of panic, Wall Street expected the Fed to step in any way possible to support prices.  This has some history as it dates back to Alan Greenspan (the Greenspan Put) and continued with Ben Bernanke and Janet Yellen.  If Jerome Powell views the stock market as less important than prior Fed heads, this represents a material change and might be contributing to the recent declines.

In addition to higher interest rates and less Fed coddling, inflation could be a third head on the market’s adversarial monster.  After years of deflation and falling prices, there are signs that the U.S. economy could be facing a pick-up in inflation.  This will be a tectonic shift in the markets’ landscape and something that many investors have never faced.

Some of the obvious impacts of inflation include higher interest rates and reduced profit growth due to higher costs.  It could lead to a situation of nowhere to hide in the financial markets.  Low or no profit growth would compress valuations and stocks would fall.  At the same time, higher interest rates would result on losses in the bond market.  The 60/40 or 70/30 mix of stocks and bonds strategy that became popular in the past several years of would suffer.  Add some leverage to this equation, as is the case with many hedge funds, and the pain could become intolerable.

Of course, these developments are not certain to happen.  The capital markets have several reasons for confidence.  Lower corporate taxes should drive earnings growth, the Trump administration has rolled back a great number of President Obama’s regulations, and business and consumer optimism is high.  On this final point, there is much expectation on corporate investment as a result of reduced taxes and repatriation of offshore capital.  This could be a powerful economic wave if it happens.

The volatility of February and March has been a surprise.  The important question is whether it is part of “normal” correction and a great buying opportunity or a function of a changing backdrop to the markets and the start of a larger decline.  This latter option would qualify as something “completely different” and would suggest further downside risk.

It would seem that investors are well aware of the bullish argument and that much of the positives are priced in.  The damages from higher rates and increased inflation are less know and could cause further disruptions as the markets adjust to their likelihood.  Caution might be the best investment approach until the answer becomes clear.