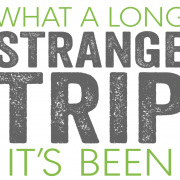 As summer faded to autumn last week, the Dow Jones Industrial Average set a new record for the first time since late January.  In the current world of sensational headlines, this could’ve been easily overlooked.  Another development that might have gone unnoticed is that the Cleveland Browns won their first regular season NFL game (another embarrassing moment that Jet’s fan will have to endure) since December 2016 or before Donald Trump’s inauguration. And, Tiger Woods won a golf tournament for the first time since the markets were in a tantrum over Ben Bernanke’s “tapering” comments in 2013.

Of course, these developments can’t compete with tweets and headlines covering political bickering, Chinese tariffs, and marijuana stocks.  Nevertheless, the Dow’s recovery is noteworthy despite not qualifying as front page, above the fold material.

As a reminder, stocks moved from lower left to upper right throughout January but then quickly dropped over 10% in the next two weeks.  The following recovery was a narrow move led by the Nasdaq.  The rest of the stock market experienced an irregular, back and forth journey for most of the second quarter. At the end of June the Dow was still lower year-to-date.  In third quarter, the S&P 500 and Dow broke out and traded above some resistance levels and eventually reached record levels.

This recent return to all-time highs for the Dow and S&P 500 occurred during the months of August and September.  These have not been kind stock market months in recent years so making a strong move during this time frame offers more creditability.  Here are the year-to-date performance for the major averages.

Across the capital markets it has indeed been a long strange trip.  Events that would be viewed as damaging the economy (such as tariffs) cause temporary dips that quickly turn into rallies.  At the same time, imploding economies from outwardly insignificant developing markets (Turkey, Argentina, et.al.), cause turmoil in the global markets.

The debate between bulls and bears likely ranks below the current societal hostility.  However reviewing both sides could be helpful to predict if the markets’ future path remains strange.

Market optimists have plenty of economic ammunition.  The job market has seen historic strength.  Jobless claims are well below 1% of the work force and less than 1.7 million people are receiving unemployment benefits.

Of course this helps drive consumer confidence.  Also, small business optimism is at the highest level in history (the survey began in 1975).  Corporate earnings are strong with forecasts for almost 20% growth for the remainder of 2018.  Guidance for 2019 is for further growth of high single digits from 2018’s base.  And there are other signs that the economy is strong and expanding.

There are always two sides to every trade and the current landscape is no exception.  The skeptical view can point to the pockets of extreme overvaluation.  Some of the mega-cap stocks trade at historically elevated valuations.  In addition to extreme multiples, these stocks contribute to the narrow leadership.  The four largest U.S. stocks are responsible for approximately 50% of the S&P 500’s gains in 2018.  Rallies with wider participation are usually more sustaining.  So with the gains being driven by only a few stocks, there is risk that the leaders stop leading.

Another potential problem is that international stock markets are diverging from the U.S.  Many international stock indexes are underperforming the American indexes.  At the close of last week, the German DAX was down 3.77%, the Chinese Hang Seng declined 6.5% for 2018 and London’s FTSE 100 was 2.57% lower.  Below is a chart comparing the S&P 500 (blue line) to the Vanguard All-World Index that doesn’t include the U.S. markets (red line).

As can be seen, the S&P 500 and rest of the world traded similarly for the first 4 ½ months of 2018.  In May these two diverged and the gap has been growing.  If there is a history of high correlation, this suggests that the international markets will catch up to the U.S. or the U.S. will fall.  Of course the former will be more pleasant but there is risk of the latter.

The stock market’s 2018 journey has been a challenging if not a strange trip.  Looking forward, both the bulls and the bears have the ammunition that could influence the direction for the rest of the year.  Further, investors will need to consider the important mid-term elections, additional Fed interest rate hikes, more tariffs, and international economic problems.  It will be a lot to work through.  But, “together more or less in line’, we’ll “keep truckin, like the do-dah man”.

Life is a clue in a crossword