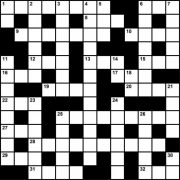 “Life is a clue in a crossword”[i]

Current economic and capital market analysis is like doing a crossword puzzle.  Some developments have multiple intersections with other events and are intensely linked.  At the same time, some news, while important, is a little economically distanced with only peripheral connections.

Or a 14 letters (2 words) for the calculation of dividing the number of unemployed individuals by all individuals in the work force.  This is obviously the “unemployment rate” and it is connected to “interest rates”.  Bonus points would be awarded for getting the clues for BREXIT, cultural division, inverted yield curve, and $1 trillion market cap.

For example the stock market doesn’t like lower profits – that’s easy.  And tariffs can cause higher expenses and potentially shrinking net income.  But what if the exporting country’s currency drops in value relative to the U.S. dollar.  Does this foreign exchange development reduce the price for the foreign seller to a point where they maintain their sales in the U.S.?  This appears to be the case with the Chinese yuan as recent the fall in its value is offsetting the impact of higher tariffs.

Another important piece of our financial crossword puzzle is “earnings season”.  With the reporting of second quarter results coming to an end, earnings have been good.  Of all of the companies releasing 2nd quarter numbers, 65.6% of these reports have beaten consensus earnings expectations.  Further, 67.5% of companies exceeded the consensus revenue forecasts.  While both of these are good, they are below the previous two earning seasons.

Within this group of misbehaving companies who experienced a stock market ‘time out’, there are some unexpected name.  This year’s biggest winners ran into some speed bumps in the second quarter.  Not that their earnings and sales numbers weren’t exceptional – they were.  But apparently they weren’t good enough as the market gave them a clear thumbs down.

For example, Netflix (symbol = NFLX) which describes itself as “the world’s leading internet entertainment service with over 130 million memberships” reported a 40% surge in year over year revenues  together with an amazing 482% jump in net income.  Total subscribers grew almost 30% from 2017’s second quarter.  Hard to criticize these numbers and a natural assumption would be for a higher stock price.  Surprisingly it fell over 10% or $50 per share.  Management lowered the forecast of future subscriber growth and current subscribers viewing hours and that’s not something the market was looking for.

Some other FANG (Facebook, Amazon, Apple, Netflix, and Google) stocks suffered similar unexpected reactions to their second quarter earnings.  Facebook tumbled on its release as users spent less time on the website.  Also management reported that expenses would increase as the company enhanced infrastructure and security to deal with their issues concerning privacy.

Despite Apple’s accomplishment, it hasn’t been a good stretch for these stock market leaders.  Prior to this earnings season, the FANG stocks have been responsible for a large portion of the stock markets’ year-to-date returns.  Naturally, Wall Street, never missing an opportunity to sell a new product, developed a FANG index.

The FANG + index is “an index that provides exposure to a select group of highly-traded growth stocks of next generation technology and tech-enabled companies”.[iii]   The FANG + index’s components are Facebook, Apple, Amazon, Netflix, Google, Alibaba, Baidu, NVIDIA, Tesla, and Twitter.  These have been investors’ favorites in 2018 and seemingly could do nothing wrong.

However, the weakness in these stocks after their earnings reports could be a sign that too much good news had been priced in.  At the end of last week the index has declined 6.78% since making a 52-week high in late June.  And much of this drop has occurred since Facebook’s earnings release.  With these market darlings selling off, it’s kind of like the popular kids got sent to detention.

Here are the year-to-date performance numbers as of last Friday for the more conventional indexes.

Another part of the FANG + index, Tesla (symbol = TSLA), is a crossword puzzle on its own.  Or, better yet, a reality show.  The electric car maker has a controversial history with many critics believing that the company has over promised and vastly under delivered.  Tesla has never been profitable and has an annual cash burn rate measured in the billions.

The company’s C.E.O., Elon Musk, has been at the center of the storm that has surrounded this company. Supporters view him as a visionary genius while his detractors claim he is a fraud.  He has fueled the fire with an ongoing soap opera on Twitter. To be sure, there a lot of Twitter soap operas, but the Tesla dialogue has to be near the top.

For example, on April 1, he posted a picture on Twitter of himself passed out against a Tesla car with the post “Tesla goes bankrupt”.  As a reminder, this year’s April Fool’s Day fell on a Sunday which happened to be Easter Sunday.  The peculiar timing increased questions of Mr. Musk’s stability and focus.

Another controversial moment occurred during the company’s first quarter conference call when Mr. Musk rudely dismissed an analyst’s question.  Again this unprofessional conduct brought criticism and questions regarding the conduct of a C.E.O of a $50 billion company.  Mr. Musk apologized during the recent second quarter (three months later).

In July, Mr. Musk referred to one of the British drivers rescuing the trapped soccer team in Thailand as a “pedo” – a shortened term for pedophile.  Vern Unsworth, the driver, had previously described Elon Musk’s offer of a mini submarine as a “PR stunt”.  Mr. Musk deleted the tweet a short time after posting but, by that time, there were many re-tweets and word quickly and widely spread.  Mr. Musk apologized a few days later in an indirect manner as he responded to another post on Twitter.

Last week, in what might be the pinnacle (or nadir depending on your view), Elon Musk posted the “Tweet of the Year” (so far).  Last Tuesday, Musk tweeted “Am considering taking Tesla private at $420.  Funding secured.”  No further details, no press release, no 8-K filing (an S.E.C. filing of material events and news releases), nothing but a tweet.  At $420 per share the deal would exceed $80 billion.

Trading in Tesla’s stock was halted after the tweet.  When trading resumed a couple hours later, the stock jumped to $380 per share.  Then the fireworks really started. Given Elon Musk’s unusual behavior, was this another prank?  Or was this his way of making a factual announcement?  Did the $420 price have drug significance (the number 420 being associated with marijuana)?

As soon as the tweet was posted there was widespread doubt on the claim that financing was secured.  Yes, the bond market has been a 35 year bull market (despite several predictions of its end) and money has been plentiful in the corporate debt markets.  But given Tesla’s challenged operating performance, this was far from a slam dunk.  Secondly, a deal of this size and complexity was not getting thrown together over a weekend.  The required due diligence would take considerable time.  Lastly, a deal of this magnitude, potentially the largest corporate takeover in history, would have generated a constant stream of rumors and leaks.

In addition to these issues, there was outrage over Musk’s tweet given that he is the largest shareholder of Tesla.  Wall Street has a history of stock promotion and things like the internet and financial news networks can be a means to that end.  Many questioned if this was Musk’s way of attacking the large short interest in the stock at same time enriching his net worth.  It is hard to believe that someone would so blatantly and obviously manipulate the stock price.  But given Mr. Musk’s history, nothing is out of the question.  While law suits began over the past weekend, there’s been no enforcement by the S.E.C. (so far).

If listening to earnings conference calls while scanning Twitter wasn’t enough, Wall Street had another meltdown to cope with last week.  The Turkish lira plunged to its lowest level ever over worries about the country’s economic stability.  While no one confuses Turkey with an economic powerhouse, in a financially intertwined global system, everyone matters.

The lira’s decline seriously weaken international confidence and will make it harder for the country to refinance debt.  Also, Turkey’s issues cast a shadow across all emerging markets as well as fragile developed countries such as Italy and Spain.  Also, European banks have exposure to the Turkish economy.

Uncertainty over international stability caused the U.S. stock markets to fall on Friday.  It snapped a string of 5 consecutive weeks of gains for the Dow Jones Industrial Average and the S&P 500.  The S&P 500 had recently broken out of a trading range and had been trending toward a new all-time record level.  It got to within 1% of a new high before Friday’s retreat.

A backdrop of an expanding economy and growing earnings is supportive of higher stock prices.  The employment picture is the strongest since disco was popular and business confidence is at record levels.  Corporate balance sheets are generally strong and business investment is slowly moving forward.

The bearish side of the trade has many intersecting clues.  First global central banks led by the Federal Reserve are talking about or are in a tightening cycle.  This means higher interest rates and less systemic liquidity.  These could turn into significant economic headwinds.

Also, the narrow market leadership is a concern.  As mentioned the FANG + have accounted for such a large portion of the 2018’s stock market gains.  Sustainable market trends typically have a broader participation.

Next sentiment might be overly optimistic.  Some investor surveys are indicating excessive bullishness including an above average level of hedge fund longs in the e-mini S&P 500 futures.  Remember that these indicators are normally viewed as contrarian because investors who are bullish have already done their buying and may not have much dry powder left.

Other risks, of course, include trade wars, geopolitical tensions, and, as mentioned above, emerging market turmoil.  To be sure, these have been potential market obstacles throughout the year but have not had any lasting impact.

Navigating the markets is tricky.  The news flow can have wide reaching effects with unclear connections to other developments.  Something that appears to be pretty straightforward can turn into a tangled mess.  On balance the markets are absorbing the bad news and trading well.  And in an attempt to fill in the blanks and complete the puzzle, perhaps the best mindset for investors is a 19 letter 3 word answer – “optimistic but cautious”.

What a Long Strange Trip It’s Been
Scroll to top