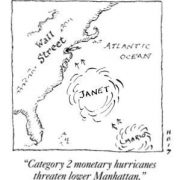 Headlines deteriorate, capital markets appreciate. It is a perplexing mystery that has many confused and incredulous. Issues such as North Korea, Charlottesville, social protests, political discord, terrorism, and natural disasters dominate the headlines. Everyone is aware of them and naturally assume the financial markets should be a tumultuous mess. Yet, markets maintain a calm levitation.

Last week the Dow Jones Industrial Average closed at all-time highs for 4 consecutive days including Friday. The S&P 500 also closed the week at a record high while the Nasdaq reached a record earlier in the week and closed slightly below that level. Even more remarkable is the fact that this is happening in September which is one of the historically weakest months.

Here are the major averages’ performance at the close of last week.

A partial explanation for the markets’ strength is that numerous negatives provide a wall of worry for prices to advance. In other words, there is so much bad news and it is so widely known that a lot of that risk is priced into current levels. As mentioned, a logical investor, given this news landscape, has probably already distanced him or herself from risk assets.
Another important support for record stock prices is corporate earnings growth. S&P 500 earnings have been quietly and materially expanding. For 2017’s 2nd quarter, profits grew at a double digit rate with the year-over year growth over 12%. Additionally, S&P 500 revenues have grown more than 5%. We’re not sure investors who are focused on the myriad of negative headlines appreciate this development.

Part of the story of earnings growth is foreign exchange related. The U.S. dollar has fallen in comparison to other currencies and is having one of its worst years ever. The chart below shows the value of the dollar in 2017 compared to every year going back to 1995.[iii] It is kind of a messy chart but the red line clearly shows this year’s performance. The irony of the beaten up greenback is that a Trump Presidency was supposed to be accompanied by a stronger U.S. dollar.

The weaker dollar has boosted earnings of large, international companies. The value of foreign sales in euros or yen, for example, translate into higher numbers in U.S. dollars because the euros and yen ‘purchase’ more dollars as they are ‘converted’ for accounting purposes.

Given this financial tailwind, as expected, stocks with significant international sales have greatly outperformed those that have largely domestic customers. Borrowing another chart from Bespoke, this illustrates the difference in the stocks’ gains.[iv] The blue line is S&P 500 companies with greater than 50% of their revenues from international markets and the red line are stocks that have 90% or more of their revenues from the U.S. As you can see, the “domestic’ stocks are up a little more than one-third the gain of their “international” siblings.

This also partially explains the underperformance by the Russell 2000. This index is primarily smaller businesses with domestic customers. On the other hand, larger companies that have global markets, including technology, are included in the S&P 500 and Nasdaq.

Another ‘under the headlines’ reason for the stock market’s record level is the prospect of tax reform. President Trump committed to revamping and reducing the corporate tax burden as part of his campaign. Within dysfunctional Washington, this issue has moved higher on the to-do list and is gaining some momentum.
It is unlikely that anything gets completed in 2017, however, there is a growing chance that something is done in 2018. A new tax law reducing corporate rates will have a major benefit to company bottom lines. The likelihood of something happening on this front is moving stocks higher now.
In addition to growing profits, reducing taxes could easily increase investment back into the business in the form of capital expenditures. This could have an exponential benefit as investing in their company will have a far reaching economic impact. The stock market is discounting this as well.
While the financial markets seem to be oblivious to the bombardment of negative news, it might the case of investors focused in the wrong area. It seems that we are overlooking some important economic positives. Specifically, corporate earnings are healthy and could become a lot stronger if tax reform becomes a reality. Of course, relying on Washington is a risky proposition. However, all parties realize the importance of these market expectations and will ultimately work with the opposition to accomplish something meaningful. And as we wait, we hope that the news flow improves because it’s pretty discouraging right now.

“The Smiles Are Returning To the Faces”[i]

If history repeats itself, and the unexpected always happens, how incapable...
Scroll to top