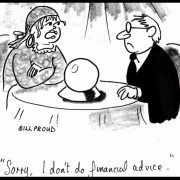 “If history repeats itself, and the unexpected always happens, how incapable must Man be of learning from experience.”[i]

Investing is hard. Madison Avenue, however, wants us to believe otherwise as TV ads for brokerage and financial advisory firms make it appear so easy. They portray clients who can only squeeze 15 minutes out of their hectic schedules for their finances yet have everything running smoothly. Or other ads where analysis and winning investment decisions are as simple as hitting a button. Contrary to this fantasy, the real world of money management is much more complicated and challenging.

It is especially difficult when deeply set historical trends inexplicably change. In other words, when the markets don’t do what they are supposed to do. We turn to September as an example of Mr. Market’s confounding ways.

Transporting ourselves back one month to end of August, we find Hurricane Harvey devastating Texas, North Korea firing missiles over Japan, the country trying to understand Charlottesville, the Republicans failing to repeal the ACA, and, of course, Tweets from President Trump. It was an uncertain and worrisome time.

As to the capital markets, caution and risk avoidance would be logical strategies given this landscape. A further nerve-wracking piece of the equation was the fact that were entering a potentially tumultuous time of the year – September and October.

To further illustrate this point, here is a graph that shows the results of $100 invested in the S&P 500 for each of the months going back to 1967 (50 years).[iii] The “Septembers” are the thick red line and are clearly the worst performing month. In fact the $100 invested exclusively in September is only worth $71 in 2017. The next worst month is August which has a value of $98.

So given this history combined with the background of social unrest, geopolitical tensions, and the unknown damage from Hurricane Harvey, who in their right mind would want anything to do with the stock market. Clearly, it would be an easy decision to sell everything and prepare for another sad September.

Instead, the stock market does the unexpected and moves higher. The Dow and S&P 500 increased by over 2% and the small caps (as measured by the Russell 2000) jumped over 6% in September. The Nasdaq Composite, which has been 2017’s leader, paused and was down less than ½%. September’s peculiarity is further proven by the Jets winning 2 games and finishing the month with a 2 – 2 record. Indeed, a curious month. Here are the year-to-date numbers for the major averages.

This apparent irrational investor behavior could be explained by optimism concerning the strengthening economy and tax reform. Last week the Commerce Department reported that GDP (gross domestic product) for the 2nd quarter grew at 3.1% which was above forecasts.

Of course, this is backward looking as it is a 2nd quarter number and we just finished the 3rd quarter. However, there are some indications that the growth will continue. The ISM Manufacturing report for September came in at 60.8. This was the first monthly reading at 60 or higher since February 2011 and the highest number since May 2004. The survey dates back to 1948 (formally it was called the Purchasing Managers Index) and only 13.9% of the results have exceeded 60.[iv] September’s number confirms economic optimism.

The Trump Administration released the outline of their tax reform proposal last week. Setting aside its virtues and flaws, reducing corporate taxes is a positive as far as the stock market is concerned. A reduction of corporate taxes obviously translates into larger profits but might result in increased capital investment which will have an exponential economic benefit. That’s what the markets are forecasting.

Returning to our table and chart above, a look forward to 2017’s 4th quarter might add to the bulls’ healthy confidence. October, November, and December all average positive returns for the past 100, 50 and 20 years. Looking at the chart for the past 50 years, November and December are in the top 4 months of performance. Of course, just as September didn’t follow its historical trend, there is no assurance that 2017 doesn’t have a disappointing end of the year.

Considering that the negative news flow can’t stop the stocks market, investors are asking, “Is there anything that can?” That’s actually a $3 trillion question as the Fed announced their intention to start reducing their balance sheet. Recall that as part of their quantitative easing programs, our central bank bought bonds in the market with money they fabricated with the push of a computer key. Their total holdings now exceed $3 trillion dollars (this was around $750 million before the financial crisis).

Fed Chairwoman Janet Yellen announced that the Fed will begin this process in October. To start with, the mechanics of the balance sheet reduction will be that the Fed will stop buying bonds. This will obviously reduce liquidity as dollars stay at the Fed as their portfolio matures. This could result in higher interest rates as bond prices move lower in order to attract buyers. Higher interest rates, if it happens, could be a complication to higher stock prices.

Not only did the equity markets survive scary September, they surprised everyone and moved higher. And getting past September puts us into a historically bullish time of the year. To be sure, there is no guarantee that the markets don’t begin react to North Korea, Russia, the intense social unrest, or some other unforeseen event. However, the markets’ strength in 2017 has been impressive and should be respected until it’s broken. Nevertheless, it’s always wise to keep in mind that Mr. Market can be very, very fickle especially when you least expect it.

“I’m Caught in a Crossfire That I Don’t Understand”