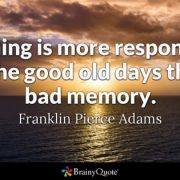 Somethings aren’t what they used to be.  This comment isn’t a nostalgic yearn for the ‘good ole days’ but, instead, an observation that virtually nothing is protected from the ever present upheaval impacting our lives.

Take the National Football League for example.  NFL football games used to be around three hours in length.  Now due to a combination of constant reviews of officials’ rulings and endless player celebrations over the most routine play, the games are a tedious bore and have become unwatchable.

Another example of how times have changed involve federal government shutdowns.  They used to have much more meaning.  Previous shutdowns came with intense angst and fear over their unknown length.  Further they used to be accompanied by threats of credit rating downgrades, a falling U.S. dollar, and widespread fallout.  Sadly, government shutdowns have turned into an exercise in name calling and casting of blame with everyone knowing it won’t last long.  They’ve become routine.

And of course, the stock market is not immune to perception change.  For example, bold headlines used to announce when the Dow Jones Industrial Average crossed a 1,000 point threshold.  The business television stations would break out the party hats and it would be the topic of the day.  Last week the Dow crossed 26,000 for the first time and, if you weren’t paying attention, you could have easily missed it.

Perhaps this has become too common.  Last week’s 26,000 mark is the eighth 1,000 point level gained since Election Day in November 2016.  Furthermore, this latest threshold only took 13 calendar days from when the Dow crossed 25,000 – hardly enough time to get the Dow 26,000 hats made.  This is the shortest number of days for the Dow to move from one 1,000 mark to the next.  Obviously, 1,000 is a much smaller percentage and therefore an easier accomplishment at 26,000 than at the lower numbers.  Nevertheless, this has been a historic move for the Dow.

Not only has the stock market been moving up, it has been a remarkably steady, smooth journey.  Last week the S&P 500 set a new record for the longest time without a 5% correction.  At 395 days, this new stretch beat the 394 days in the 1990’s and 386 days in the 1960’s.  To further point out how rare this is, the S&P 500 has averaged four 5% corrections annually dating back to 1927.  In other words, there are normally four 5% corrections every year but we have’t seen anything close to that since the beginning of 2016.  Investors should consider the possibility that we might have some catching up to do.  Below is a graph showing the previous streaks. (Financial Time, January 19, 2018) Looking at this month’s trading, the rally continues.  The S&P 500 started the year with 9 consecutive days of closing higher than it opened.  Further, it closed at a new record high 11 out of the first 14 trading days.  While this does not set a record for the best start to a year, it is among the top.  Here are the gains for the major averages through last Friday.

Another noteworthy financial market development of 2018 involves a spike in interest rates.  We know that the Federal Reserve raised rates in December and that the shorter maturities of the yield curve had been moving higher for several months.  However, the rates on the longer end of the curve (10-year and 30-year bonds) had not moved much.  In 2018, the longer dated rates have moved up.  Last week the 10-year Treasury note closed around 2.66% which is up from 2.41% at the end of 2017.  The 10-year note was last above 2.5% in March 2017.

On the surface, these higher interest rates might seem insignificant.  But in a leveraged financial system and in an economy that has gotten used to low rates with little volatility, this is a change.  Of course, if rates are moving up due to strong loan demand and that capital is being used to fund investments that will result in further economic growth, that is good.  However, if other factors are pushing rates (inflation, deficit concerns, etc), this could lead to wider spread problems.  Higher interest payments will lead to higher interest expenses for the federal, state, and local governments.  This will lead to larger deficits if tax receipts don’t grow.

Another worry involves individual and corporate debt.  For loans with variable or adjustable interest rates, this move will increase the cost of borrowing.  Whether it’s an adjustable rate mortgage or a bank loan tied to LIBOR, these higher yields will change the landscape.

System wide debt levels are high.  According to the Federal Reserve Bank of St. Louis, non-financial corporate business debt exceeded $6 trillion at the end of the 3rd quarter 2017.  This is up from $3 trillion in the mid 2000’s.  On top of this, individual mortgage debt exceeds $1,300 trillion.  And these totals do not include such things as credit card balances, automobile financing, and student loans.  Clearly there is a lot of debt in the system and this leverage could be stressed if interest rates continue to rise.

Foreign exchange is another market with some important developments.  Actually, this story dates back over a year but has been getting more attention in the New Year.  The value of the U.S. dollar has noticeably fallen against other major currencies.  The dollar index is an index that measures the U.S. dollar against a basket of major global currencies (euro, yen, pound, etc.). It has steadily declined since December 2016 and closed last week at the lowest level since late 2014.  This has gone against the widespread belief that a Trump Administration, with the ‘Make America Great Again’ initiative, would result in a strong dollar.  That turned out to be a bad bet.  Below is a chart for the DXY (dollar index) provided by Bespoke Investment Group. The U.S. dollar is critical to the international financial markets and global trade.  Virtually all international trade, including crude oil, is transacted in the U.S. dollar.  For example, if Japan imports liquefied natural gas from Australia, it is done through the greenback – the yen and Australian dollar are both converted to U.S. dollars to complete the transaction.  The same flow would occur when China imports commodities from Brazil and Sweden exports to Canada.

The value of the dollar also influences the competitiveness of U.S. companies.  With a weak U.S. dollar, the products sold by U.S. based companies are cheaper in terms of other currencies – the euro or yen buy more dollars.  This means that domestic companies with international markets should be more competitive from a price standpoint and those businesses should see increased sales.

While this improved competitive position is obviously good, a weaker currency has its drawbacks.  A falling currency is usually associated with countries experiencing trouble or instability.  Further, a weak currency can be the result of capital outflows which could turn into a strong economic headwind.

So far, there hasn’t been any noticeable deterioration or impact from the U.S. dollar’s retreat.  This can change but the current landscape is unaffected.  Perhaps the main force behind the fall is the relative position of central bank policy.  The Federal Reserve has been raising rates for a couple of years while the European Central Bank has only begun reducing their monetary easing.  It could be that the markets have already discounted the Fed’s anticipated rate increases while recognizing a strong European economy and higher continental interest rates later this year.

It’s been an exciting new year for the capital markets including a strong rally for stocks.  And while a repeat of 2017 would be welcome for equities, a pick up in volatility is expected.  Given that we typically get four 5% corrections in a year and we haven’t had one in two years, it shouldn’t be a surprise for the markets to be a little choppy in 2018.  Of course, maybe like the NFL and all of the other things in our lives that are going through subtle change, perhaps the markets have transformed into a smooth path of always going up.  That presumes the four most dangerous words in investing – “It’s different this time”!  Yes, somethings in our lives aren’t what they used to be but risk isn’t one of them.

I Just Want to Celebrate Another Day of Livin’

Slow Down, You Move Too Fast; You Got to Make the Morning Last.
Scroll to top