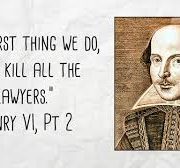 January’s employment report estimated that 227,000 new jobs were added to the economy during the month.  This was the largest monthly gain since September.  Despite this good news, however, the unemployment rate ticked up to 4.8% from 4.7%.  This was the result of more Americans, who previously were not looking for work, joining the workforce.  The labor force participation rate moved up to 62.9% which was an improvement from recent readings but remains well below the mid-to-upper 60% readings from before the financial crisis.
Of course, some jobs are more desirable than others.  Likewise, some jobs are more respected than others.  As evidenced by the fact that every politician (on both sides) campaigned strongly against it, Wall Street, for many, is near the bottom of the respect scale.  Not that politicians are widely adored, but for now they have someone other than lawyers below them.
Despite its lowly status, Wall Street rescued the stock market last week.  Specifically, it was the stocks of Wall Street that saved the Dow 20,000 level. Returning to the beginning of last week, stocks opened broadly lower and the Dow dropped below 20,000.  This was the first trading day after the White House announced the immigration restrictions and there was angst over its fallout.  As the markets fell, the buzz was the this marked the end of the Trump rally.
After this selloff, the Dow and the rest of the stock market slinked sideways until Friday.  With the strong January jobs report, stocks jumped and the Dow reclaimed the 20,000 level.  The Dow was up 186 points on Friday which was the biggest one-day gain in almost two months.
Looking closer at this, four stocks accounted for 66% of the move.  American Express, Goldman Sachs, JP Morgan, and Visa were alone responsible for 124 of Friday’s spike.  Goldman alone accounted for 72 points of the move.  Thank you, Wall Street!
Here is a chart of two banking indexes since the election.  The blue line is the S&P bank ETF while the green line is the regional bank ETF.  The purple line is the S&P 500.  The banking stocks have clearly led U.S. equities since November 8th.[ii]  The ETF represented by the blue line includes the major Wall Street banks.  If this continues, investment bankers, stock brokers and hedge funds might claw their way above lawyers and politicians.
Friday’s rally helped push the major averages’ YTD performance.  The Dow and Russell had some trouble keeping positive during January.  After the push higher to start the year, prices drifted lower in the last half of the month.  The Dow, S&P 500 and Russell had a three-day losing streak going into Friday’s move.  Here are the year-to-date number for the major averages.
2017 YTD
Dow Jones Industrial Average                                                 +1.6%
S&P 500                                                                                   +2.6%
Nasdaq Composite                                                                   +5.3%
Russell 2000                                                                             +1.5%
Indices are unmanaged, do not incur fees or expenses, and cannot be invested into directly. These returns do not include dividend.
The fixed income market was much less volatile than the equity market.  Treasury yields were a little higher week over week.  The 10-year Treasury note closed Friday at 2.496% up from 2.48% the prior week.  This yield peaked out in mid-December above 2.6% and since then it has traded in between 2.3% and 2.5%. There appears to be some sellers around the 2.3% level which pushes yields back up once it is reached.
Other fixed income chatter involved future Federal Reserve interest rates increases.  The March FOMC meeting now has a greater chance of another fed funds rate increase given January’s employment report.
Besides the jobs data, the news flow been hectic.  In addition to the fast-moving developments in Washington and President Trump’s Twitter account, year-end earnings reports were in full swing.  There have been around 1,000 companies that have released year-end and quarterly results.  65% of the reporting companies have exceeded consensus earnings estimates and 56% have beaten revenue estimates.[iii]
While analyst estimates still involve a management wink and nod, the 65% beat rate, if it finishes there, would be the highest quarterly result in many years.  The 56% revenue beat is better than recent quarters but below levels of many prior quarters.[iv]
Another important earnings season metric is management guidance for future financial performance.  There is a negative spread between companies raising guidance to those lowering expectations (more companies lowering numbers).  This is typical in recent years.[v]
Part of the reason for this is that analysts begin with optimistic annual predictions which then gets ratcheted lowered over time.  An example is the forecast for the S&P 500 annual earnings number – it starts at a high number showing strong year-over-year growth but gets lowered throughout the year ending up with a much more subdued final number.  Again, this has been a pattern for many years.  Several market skeptics have been critical of this ‘game’ but the markets have chosen to play along (so far).
U.S. stocks have traded sideways for the last few weeks.  Given the rally from election day into mid-December, this is a healthy price action.  Further, we have seen a rotation of market leadership.  Technology, which lagged in the weeks after the election, is the leader in 2017.  Also, it’s especially noteworthy that stocks have had plenty of opportunity to correct or selloff but haven’t.  With all the acrimony, protests, and general mudslinging since the inauguration, we have had plenty of reasons for investors to reduce risk.  Yet stocks remain at record levels and that is encouraging.
The economic fundamentals (strong jobs report, corporate earnings, low inflation, etc.) point to growth.  This could help support stocks and even push prices higher.  There is a lot of uncertainty and stocks valuations are not cheap.  But market tops are rarely caused solely by stock valuations.  More importantly, if the markets keep climbing, Wall Street may ascend the reputational ladder and we may stop worrying that Henry VI’s line will be changed.