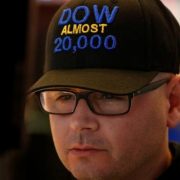 “Those who have knowledge, don’t predict. Those who predict, don’t...

Republicans and Russians and Bulls…. Oh My
Scroll to top