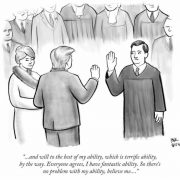 Donald Trump was sworn in as the 45th President of the United States on Friday.  The inauguration was as anticipated including all of the tradition and pomp.  The oath of office, the speeches, parades, balls and celebration, all were done as expected.  Looking forward, it may be a while before we get this degree of predictability out of the Trump administration again.
Everyone knows the general direction the Trump administration wants to move.  There is risk that the implementation of this direction gets complicated.  Issues such as tax policy, cabinet appointees, trade policy, fiscal budgets, foreign relations, and regulations are things that need to be worked out and wrinkles could easily arise.
On election day, the stock market had a sudden change of heart regarding Donald Trump and has signaled its approval ever since.  There is little debate that Washington’s economic influence will shift from hindrance to supportive.  Lower corporate tax rates, reductions in business regulations, and fiscal programs and incentives will boost economic growth.
An important question centers on how much of these positives have already been discounted.  In anticipation of these tailwinds, the Trump rally has carried stocks to record highs.  As U.S. equity valuations are above the historically normal levels, this then leads to another question – are we getting a little ahead of ourselves?
If the new administration’s transition goes smoothly and its policies and programs get implemented without problems or delays, the economic impact could arrive quickly.  This would be stock market friendly for both the current levels as well as higher prices later in the year.  However, if President Trump and his team encounter problems with execution of the plans and programs, the stock market could correct.
History shows that a president’s first year in office can be tough.  Below is a graph showing the presidents that had a recession in his first year.[ii]  This might be caused by uncertainty surrounding a change of direction or battles with Congress or decision making errors. At this point, President Trump might be an exception as there no signs of a recession.  Still there are many variables that still could cause problems such as trade wars or a spike in inflation.
If the January stock market is any indication on the economy or new president, the short-term message is unclear.  After moving higher in the first week, U.S. stocks have traded sideways.  Last week the major averages closed marginally lower.  The Nasdaq, which underperformed after the election, has been the leader in 2017.
2017 YTD
Dow Jones Industrial Average                                              +0.3%
S&P 500                                                                                +1.5%
Nasdaq Composite                                                                +3.2%
Russell 2000                                                                          -0.4%
Indices are unmanaged, do not incur fees or expenses, and cannot be invested into directly. These returns do not include dividend.
In fixed income, bond yields rose last week but are around the same level as they started the year.  The 10-year Treasury note closed the week at 2.466% up from 2.38% the prior week.
One of the most popular predictions for 2017 is that the U.S. dollar will rise against other currencies.  Expectations for higher interest rates together with stronger economic growth make the greenback more desirable.  Last week, however, the dollar index fell and it is down 1.47% in January.  Maybe dollar bulls have gotten tired.
Commodities are higher in 2017 as the CRB commodity index is up 0.78% for 2017.  Crude oil and natural gas are lower but precious and base metals are higher.
Although it is very early in the earnings reporting cycle, the results have not disappointed.  63% of reporting companies have exceeded EPS forecasts which is about average. The story on the revenue part of the income statement is different.  More than half of the reporting companies have missed analysts’ revenue estimates.[iii]  The amount of companies reporting will be much higher in the next few weeks and we’ll keep readers informed how the results are.
Putting everything together, we think there are a few consensus views for 2017’s capital markets.  Many strategists and managers are calling for U.S stocks to be moderately higher for the year.  It seems that the expectations are for high single digit gains for equities.  As mentioned above, conventional wisdom also looks for a rising dollar and higher interest rates.  These experts appear to not overly concerned with potential obstacles and potholes as they believe all of them are manageable.
We would like to share in this optimism but have some concerns.  First, current events rarely play out as smoothly as everyone expects.  Given the proposed and expected changes in Washington, there is a lot that could go awry.  With stocks at record levels and elevated valuations, any deviation from a smooth Trump transition that results in stronger economic growth might cause stocks to dip.  If the stock market develops some doubts over President Trump or the economy, we would expect prices to correct.  We wouldn’t expect a nasty bear market, but a correction that adjusts valuations to more normal levels.  It promises to be an interesting year and we look forward to the opportunities in front of us.
Jeffrey J. Kerr, CFA
Kerr Financial Group
Kildare Asset Management
168 Water Street
Binghamton, NY 13901
[i]  The New Yorker, January 2017
[ii] DoubleLine Funds, January 2017
[iii] The Bespoke Report, January 20, 2017
https://kerrfinancial.com/wp-content/uploads/2017/12/78d1db4c-653f-4c91-87da-9d90ceaf89ae.jpg 706 800 spowell http://kerrfinancial.com.c1.previewmysite.com/wp-content/uploads/2017/12/kerr-logo.jpg spowell2017-01-21 16:05:102017-12-18 16:06:54Republicans and Russians and Bulls.... Oh My
0 replies

Brother, can you spare a dime?[i]