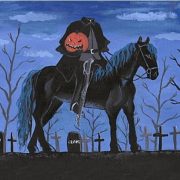 October has a history of being a frightening month. Shorter days means more darkness together with a chill in the air. Of course, Halloween is accompanied by tales of ghosts, goblins, demonic developments and the release of B-rated horror movies. And scariest of all, Congress is in session.

Of course the financial markets also have a history of paranormal Octobers. The 1929 and 1987 crashes occurred in October as well as the Panic of 1907. In addition to these historic events, October has had other seminal market tribulations such as Long Term Capital Management’s implosion (technically this was a September event but had October fallout) and 2008’s drop after Lehman Brothers failed which helped start the financial crisis.

Despite this maniacal reputation, 2017’s October has been a continuation of the pleasant and steady move higher that has dominated the year. In fact, this year might become the “calmest” on record. Ryan Detrick, Senior Market Strategist at LPL Financial Research, suggests one way to determine volatility (or lack of it) is by measuring the absolute value of the average daily change. Mr. Detrick uses the S&P 500 and calculates this daily change at 0.30% so far in 2017. This is the second lowest reading with 1964 coming in at 0.26%.[ii]

The chart above shows this measurement dating back to 1928. It is interesting that there were three consecutive years of this type of low volatility in the mid-1960s. We can’t rule out the possibility that we are beginning another similar stretch. Another common belief is that when volatility returns it will signal the start of a bear market. Please note the low number registered in 1995. This was followed by much higher volatility readings in conjunction with the bull market of the late 1990s.

The serene capital markets in the face of the current headlines is similar to a perplexing mystery penned by Edgar Allan Poe. There is a great deal of irony that the markets are experiencing one of the least volatile years in the face of cultural division, protests, terrorism, political polarity, and widespread social tension.

Not only are the markets curiously calm, they are trading at all-time highs. The S&P 500 closed at a record high every day last week. Thursday was the 30th anniversary of the 1987 stock market crash where the Dow Jones Industrial Average lost over 20% in one day. Stocks marked this by staging a 2017 type crash – plunging a painful one-half of one percent – before rallying back and closing higher on the day.

While the streak of daily records for the S&P 500 is impressive, there is more to this story. Jason Goepfert, the head of Sentiment Trader, points out that the S&P has 6 weekly record closes in a row and 7 consecutive monthly record closes. As Mr. Goepfert points out, this is 18 record closes across daily, weekly and monthly time frames. He goes to say that this is the most in history and that other periods that had a comparable series of records did not mark major stock market tops.[iv]

It is interesting that the S&P 500’s accent has happened despite battling some intimidating zombies. Bellwether stocks such as AT&T, Disney, Exxon-Mobile, General Electric, IBM, Target, and Wells Fargo are not participating and, in fact, are all lower year-to-date. These blue chip, dividend paying stocks were last year’s darlings but have become “the walking dead”. It’s remarkable that the averages have performed so well despite this drag. Here are the major indexes year-to-date numbers at the close of last week.

Inquiring minds want to know why the financial markets are doing so well when the world seems to be crumbling around us. The answer has nothing to with Mr. Market playing a cruel game of Trick or Treat but rather fundamental improvements together with Wall Street’s masterful marketing.

First, corporate earnings have been strong and are projected to keep growing. This has been the trend for 2017 and it has continued in the 3rd quarter. 63% of the companies that have reported so far have beaten consensus earnings estimates. Stocks trade at lofty valuations but investors currently appear to be willing to pay higher multiples as long as the bottom line keeps growing.

The popularity of passive investing and the use of index ETFs and mutual funds also contribute to the tranquil environment. Passive investing involves buying exchange traded funds (ETFs) or mutual funds that track an index. Investors seek to invest in various asset classes via these funds. For example, SPY is the SPDR S&P 500 Trust and it tracks the S&P 500 index. AGG is the iShares Barclays Aggregate Bond Fund that track the Barclays Aggregate Bond Index which is a broad bond market index.

Capital flows into passive investment strategies have been astounding. BlackRock is the sponsor of the iShares family of ETFs. They recently reported inflows of $96 billion in the third quarter. This brought the year’s total to $264 billion which easily exceeds last year’s inflow of $202 billion.[v]

Vanguard Group, the leader in index mutual funds, has seen inflows of $291 billion in the first nine months of 2017. This is below last year’s influx of $323 billion but will likely be surpassed by the end of the year.[vi]

BlackRock and Vanguard are not the only organizations offering these approaches. There are many other significant investment firms with similar options. But just counting these two firms, a remarkable total of over $1 trillion of investment capital has been gathered in the past two years. We would guess that the majority of these dollars were directed to a passive indexed strategy.

This means that as soon as the dollars get in the ETF or mutual fund, they are invested. There is no discussion over timing and no holding for a better price – the money immediately buys more of the holdings of the index it is mirroring. $1 trillion of indiscriminate buying could be a major force behind the stock market’s steady move higher despite an unsettling news flow.

This develops into a self-feeding cyclical phenomenon and Wall Street is very happy to help promote. The more capital that flows into these funds the better the market performs and the better the market performs the more capital it attracts. So if it’s low cost, index strategies that investors want for their IRAs and 401k’s, the financial industry are more than happy to meet the need with all kind overlapping index products. “Low cost investing for the long term” is a pretty easy sell. We’re sure somewhere in the fine print it mentions that stocks can go down.

The scarier part of this situation is that passive investing is so widespread. It seems everyone is doing it which is eerily similar to some other periods of popular investing fads. Portfolio insurance was a popular strategy in 1987. It was supposed control losses by hedging through stock futures contracts. It ended up contributing to the 1987 Crash.

More recently, tech stocks in the late 1990s were can’t miss as the internet was changing the world. The internet did change the world but somewhere along the way the markets realized that not every dot com company was going to be successful. Stocks crashed again. We won’t go into the money lost on condo speculation in the 2000s.

With the current landscape, the real horror story will be when the markets start to weaken and everyone wants out at the same time. It could be a sudden and dramatic trip lower and once again investors will be wondering what went wrong. Of course, the timing of such an event is the difficult question. For now, that’s enough of fearsome tales of investment ghosts and goblins – it’s time for Halloween candy.