There are many financial theories that attempt to forecast a securities’ valuation.  Modern Portfolio Theory and the Capital Asset Pricing Model are two of the most noteworthy.  The models try to quantify various factors into a formula that results in a theoretical fair value for stocks, bonds, commodities, currencies, etc.  As part of the calculation, these theories make assumptions on some variables.  One of the important assumptions that investment theories hold is that investors act rationally.  Obviously, this must be called into doubt when considering how the markets traded around the election.
In the weeks leading up to the election, investors were convinced that a Trump administration would be bad for the markets.  Consequently, stocks rallied on any news of an increased likelihood that Hillary Clinton would win and this included the two trading days before the election night.
Election night, as many know, was especially looney.  As Donald Trump gained in the tally, there was an inverse correlation between his electoral college numbers and U.S. stock market futures.  As you can see from the nearby chart (from Barron’s), as Trump’s chances of victory climbed to 90%, the futures on the Dow Jones Industrial Average plunged 800 points!
Further the chart shows the Dow’s recovery in the overnight trading.  From there the markets inexplicably decided a Trump presidency wouldn’t be apocalyptic and a powerful rally lasted the rest of the week.  The Dow jumped 5.4% last week while the S&P 500 rose 3.8% and the Nasdaq advanced 3.8%.  But small caps were the biggest winner for the week as the Russell 2000 was up over 10%.
So, the markets went from Trump being a disruptive market negative that would cause global trade to virtually stop to an economic savior within the matter of hours.  And this happened without any meaningful change of rhetoric.  Remember, we assume investors act logically.
Not every sector participated in last week’s move.  Technology was weak and many leaders were left behind.  Worries over immigration reform and tariffs on imports from Asia pressured the technology sector.  Also, many international stock markets were lower led by Brazil and Mexico. 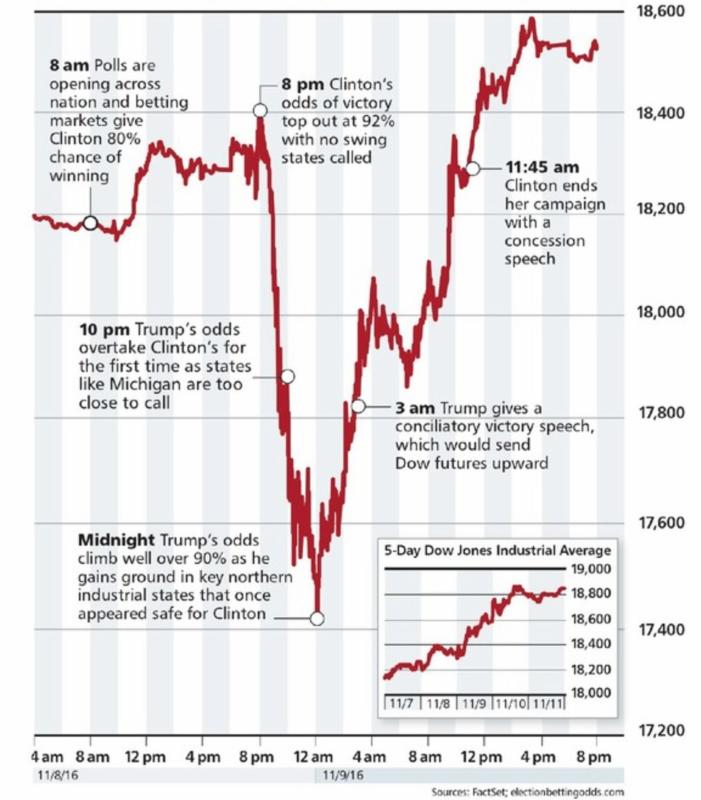 The bond market was almost as volatile as the equity market.  The 10-year treasury note’s yield was 1.8% on election day but then spiked to close the week above 2.2%.  This may not appear to be a big move but it is huge in the normally stable fixed income market.  Further the velocity of this spike (that it happened in three trading days) was damaging.  Bond traders don’t position themselves for these types of moves so many may have been caught off guard.
Increased inflation expectations worried investors and was behind this move in yields.  The market views a Trump presidency as one with increased spending, lower taxes, and trade restrictions.  Stay tuned on the bond market as it may flip its view as the stock market did.
Last week’s rally materially improved the major averages’ year to date performance. With election behind us and the fact that we are entering a seasonally strong part of the year, prices might continue rising.  However, the Fed will likely raise the fed funds rate in December (although the bond market has priced that in).  Also in December, there is an important Italian referendum vote.  This could be another vote against the EU.
2016 YTD
Dow Jones Industrial Average   +8.2%
S&P 500                                     +5.9%
Nasdaq Composite                     +4.6%
Russell 2000                              +12.9%
Indices are unmanaged, do not incur fees or expenses, and cannot be invested into directly. These returns do not include dividend.
Last week’s markets moved quickly and may have over reacted to the perceived agenda of President-elect Trump.  However, some things look to be high probability changes.  For example, fiscal stimulus, tax reform, and deregulation are priorities that will be acted upon in 2017.  The markets must adjust to whatever the final versions of these initiatives look like.
While these policies will have a bigger impact domestically, they will influence international markets as well.  The foreign exchange markets will be important and last week’s we saw dollar strength.  Part of that was a result of higher bond yields, but also prospects of a stronger U.S. economy attracts international capital.
A strong dollar squeezes emerging markets.  International trade is mostly done in U.S. dollars even if the U.S. is not involved in the transaction.  Consequently, this is obstacle for many foreign economies which could turn into a bigger problem especially if the dollar keeps rising in 2017.
As stocks, bonds, currencies, and commodities adjust to the unexpected landscape of a Trump administration, there is likely to be false moves and corrections across all asset classes.  Of course, it would be a lot easier to maneuver these markets if investor did actually act rationally.  Stay tuned.
The opinions voiced in this material are for general information only and are not intended to provide specific advice or recommendations for any individual. Past performance is not indicative of future results. Investing involves risks, including the risk of principal loss. The strategies discussed do not ensure success or guarantee against loss. This information should not be construed as investment, tax or legal advice and may not be relied on for the purpose of avoiding any Federal tax penalty. The Dow Jones Industrial Average is a price-weighted index of 30 actively traded blue-chip stocks. The Standard & Poor’s 500 (S&P 500) is an unmanaged group of securities considered to be representative of the stock market in general. It is not possible to invest directly in an index. Trading of derivative products such as options, futures or exchange traded funds involves significant risks and it is important to fully understand the risks and consequences involved before investing in these products. All information is believed to be from reliable sources; however we make no representation as to its completeness or accuracy. All economic and performance data is historical and not indicative of future results. Market indices discussed are unmanaged. Investors cannot invest in unmanaged indices. If assistance is needed, the reader is advised to engage the services of a competent professional
http://kerrfinancial.com.c1.previewmysite.com/wp-content/uploads/2017/12/kerr-logo.jpg 0 0 spowell http://kerrfinancial.com.c1.previewmysite.com/wp-content/uploads/2017/12/kerr-logo.jpg spowell2016-11-18 16:27:052017-12-18 16:27:45Pretzel Logic
0 replies

Be Careful What You Wish For, You Might Get It
Scroll to top