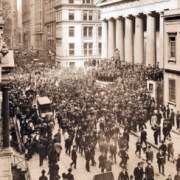 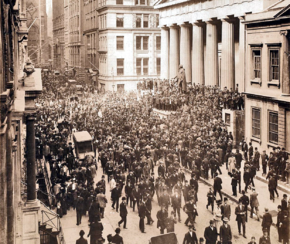 “October.  This is one of the peculiarly dangerous months to speculate in stocks.”

This was written by Mark Twain in his novel “Pudd’nhead Wilson”.  Twain underlines how dangerous the financial markets can be in October. As a reminder, the month has witnessed two stock market crashes with the anniversary of the 1987 version being last Friday (October 19th).  In addition to stocks, there have been debt crises, foreign currency melt downs, and general capital market turmoil in past Octobers.

Mark Twain’s recommended restraint regarding speculation in October extends to some other months.  Within the novel, the above quote continues “The others are July, January, September, April, November, May, March, June, December, August, and February”.

Concerning the markets, the wisdom of Samuel Clemens (Mark Twain’s real name) is extraordinarily underestimated and goes beyond the general admonishment of speculation.  His warnings about October have proved to be incredibly accurate, but the most amazing thing about this was that Twain penned this in 1894!!  Obviously this is well before the Panic of 1907 and the Stock Market Crash of 1929 both of which took place in October.  Thankfully, Samuel Clemens lived in the 19th century and was allowed to focus on writing.  Otherwise, someone with this level of insight in the 21st century would have a hedge fund in Greenwich, Connecticut, robbing us of his real talents.

Returning to October 2018, it is attempting to make its own historical mark.  It’s on pace to be the worst October since 2008.  The S&P 500 and Nasdaq are enduring their worst start to any month since 2011.  This is an important statement as there have been several nasty months in that time such as August 2015, January 2016 and February 2018.

Stocks have widely retreated this month.  Below are the major averages’ returns for October and year to date at last Friday’s close.  As you can see, much of 2018’s gains have been given up in the first few weeks of October.

So what is haunting the markets?  There is a long and wide ranging list of possibilities.  Issues such as the Italian fiscal debacle and its battle with the European Union.  Tariffs and trade wars is another worry.  Widespread social division does not help matters.  The markets could be concerned that the U.S.’s mid-term elections could thwart Trump’s economic initiatives.  And, of course, add in hot spots like Russia, Saudi Arabia, and Turkey.

While these factors are most likely contributing to investors’ anxiety, there are other important developments that are changing the financial background.  To borrow from The Food Network’s “Diners, Drive-Ins, and Dives”, let’s call these the ‘Triple D’s’ – the dollar has strengthened, the debt markets are facing higher interest rates, and there appears to be a decline in corporate earnings.

First, the U.S. dollar has risen since the spring as compared to other currencies.  The dollar is an important component of global trade as most transactions are done in U.S. dollars.  When the greenback appreciates, it takes more of the local currency to do a transaction.  This results in higher costs.

Another headwind caused by stronger dollar is higher interest costs for foreign borrowers.  Non-U.S. corporations and governments have sold debt in the U.S. during the past several years.  As the local currency loses ground to the U.S. dollar, it costs more money to make the interest payments.

A strong dollar also hurts U.S. companies that sell in foreign markets.  In dollar terms, the price of the product or service provided by a U.S. company increased in terms of the local currency.  In other words, if the dollar rises against the euro, the price of Microsoft’s software is higher for a European customer.

As a further illustration of this, PPG issued a warning of their quarterly results in early October – their third quarter financial results will be lower than forecast.  One of the reasons given was that foreign sales were less than expected due to the stronger dollar.  PPG is a typical industrial company which means that many other international organizations may share this challenge.  The damage from a strong dollar could become a repeated theme throughout this earnings season.

The debt markets are another complication facing investors. Interest rates have been churning higher all year as a function of the Federal Reserve, a stronger economy, fiscal deficits, and inflation.  Higher interest rates increase borrowing costs and pressure corporate bottom lines which might be what the markets are focused on.

Another important part of this development is that it denotes a change in the landscape.  Interest rates have been declining since the early 1980’s.  A shift in this trend could have far reaching impacts.  On top of tighter money and higher interest expenses, the cost of capital will be greater which bring enlarged scrutiny on business decisions.   Perhaps the biggest adjustment will be that many investors and corporate CFO’s have never experienced this type of market environment.  This could become a very big part of the capital markets over the next several years.

The final “D” in our Triple D analogy is declining earnings.  To be sure, corporate earnings have been very strong and that should not change with 3rd quarter reports.  However, future guidance may not be able to sustain the growth of recent quarters.  Returning to the PPG warning, the company also blamed higher logistic and raw material costs.  Again, these are not unique to PPG and are likely widespread across corporate income statements.

Another example of pressure on corporate earnings is in computer chips and semi-conductors.  During the past two months, Morgan Stanley, Raymond James, and Goldman Sachs lowered their forecasts for the chip industry and their suppliers.  The Wall Street firms each referred to higher inventories and lower demand.  As a reminder, chips have become an essential part of our everyday lives.  They are in everything from automobiles to washers and dryers.  If there is a slowdown in chip sales, it could signal a peak in the economy which is not what stocks are expecting.

The remarkable effect of October on the financial markets returns in 2018 as the first three weeks have been among the worst in memory.  It seems that this is part of a changing financial landscape.  While the headlines have focused on trade wars, politics, and international problems, the real issues might be interest rates and foreign exchange.    Past Octobers have offered opportunities despite this painful process.  It’s like a giant financial game of trick or treat.

“Professor Plum, With the Candlestick, in the Conservatory”
Scroll to top