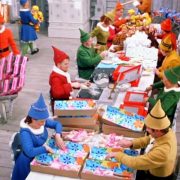 The elves at the North Pole are supposed to busy this time of year as their deadline is quickly approaching.  Wall Street’s elves, on the other hand, usually get a breather around mid-December as the markets often coast from this point through the holidays.  It’s a much different story this year.
Of course, a lot of things are different in 2016.  Concerning the markets, there’s been a full slate of developments to deal with in December.  President-elect Trump is filling out his cabinet and administration and these decisions offer further signs of policy direction.  Given the stock market’s ‘Trump’ rally is largely based on the anticipated economic boost due to the new direction promised by the incoming president, this is important news.
Other nuggets keeping investors on their toes include interest rates moving up to levels not seen in the last 2 years.  Likewise, the dollar has rallied to multi-year levels.  Also, the Federal Reserve held a two-day meeting and raised interest rates.  And, of course, the Dow is on the cusp of reaching the 20,000 level.  This all adds up to a lot of last minute shopping as investors have been too busy.
Although last week’s 25-basis point increase in the fed funds rate was expected by everyone, the FOMC (Federal Open Market Committee) revealed a forecast for 3 rate hikes in 2017.  This was a little more hawkishness than the markets expected and it triggered a broad sell-off for stocks and bonds.
While there was pain across the fixed income market, the brunt of the damage was in the shorter end of the Treasury market.  The 2-year note’s yield closed at 1.239% which is the highest level since 2009.  The 10-year and 30-year yields closed last week at their highest levels since 2014 (2.59% and 3.18% respectively).
Last week’s rate increase is only the second interest rate increase in the past decade!  Further is the only hike of 2016 as conventional wisdom was way off base in predicting 3 or 4 hikes this time last year.  Clearly monetary policy will be tighter in 2017, but how many fed funds rate increases is uncertain.
Below is a chart of the 10-year U.S. treasury and the December 2017 fed funds futures expectations.  As can be seen, the futures market is forecasting a 1.16% fed funds one year from now.  This suggests much, much stronger economic growth.  Importantly, however, this level would only be approximately two 25 basis point increases from here and not the three that the Fed is implying.[i]  The futures have a 73% probability of the first rate hike at the June meeting. 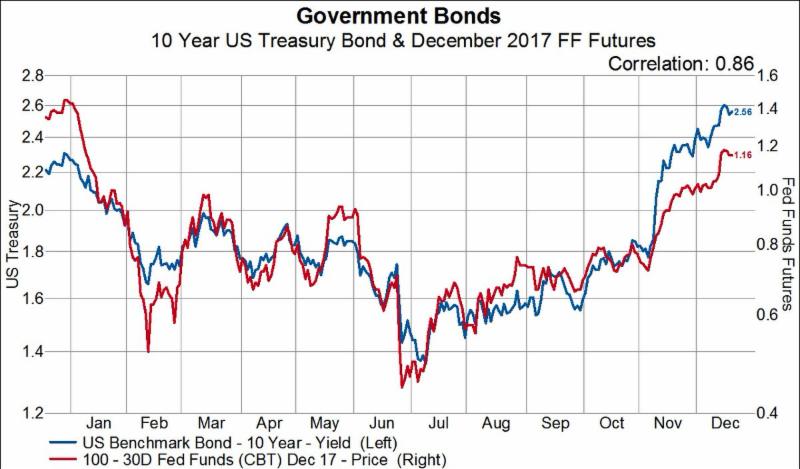 As interest rates rise, the U.S. dollar has strengthened.  The DXY index (a dollar index vs. a basket of currencies) reached levels last seen since 2003.  Some specific levels include an 8-year high against the Chinese renminbi and a 10-month high against the Japanese yen.  Also, the euro has fallen below $1.05 which has been strong support for the past several years.  Dollar – euro parity (1 dollar = 1 euro) is the next big level.
This U.S. dollar rally began in 2014 and there are few reasons to believe that the trend will end, especially in the short term.  However, in the words of Herb Stein, “if something cannot go on forever, it will stop”.  2017 might present some developments that would be a headwind to continued greenback strength.  First, the Trump administration might run into a speed bump or two.  Cabinet appointment delays, potholes in getting legislation passed and implemented, and the president-elect’s Twitter account are a short list of things that could derail a smooth first year.
Also, despite the constant stream of negative headlines out of Europe, some indicators are improving.  The purchasing managers’ surveys released last week for Germany and France pointed to growth with the French index at an 18-month high.  Further the weaker euro will help exports for the EU countries.  Lastly, despite the self-inflected damage, maybe the bureaucrats begin to make a couple helpful decisions which might benefit the economy.
Turning to stocks, it’s a toss-up who is more excited right now – children waiting for Christmas morning or traders waiting for Dow 20,000.  And while the Dow couldn’t get there last week, the S&P 500 reached its own 20,000 level for the first time as the index’s total market cap reached $20 trillion.  During the depths of the financial crisis, the S&P 500’s combined value amazingly plunged to $6.1 trillion.[i]
Once we reach Dow 20,000, what then?   Stocks are extended but these trends usually don’t end in the last half of December.  Here is a chart of the S&P 500 for 2016 plotted against its historical average.[ii] 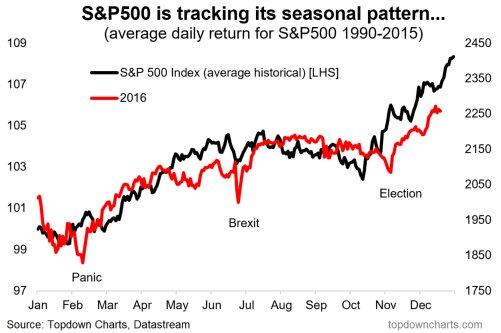 2016 has remarkably followed the trend but has trailed its average since October.  Rarely is there any large changes of direction in late December.
Further, as shown in this chart, investors are willing to pay higher valuations.  There is confidence that the “E” part of the P/E ratio will increase (lower ratio) in 2017.[i]  Analysts are busy adjusting for increased infrastructure programs and lower corporate tax rates which will increase businesses’ bottom lines.  Nevertheless, it’s not easy to get the magnitude of all these changes correct so there’s some risk of disappointment. 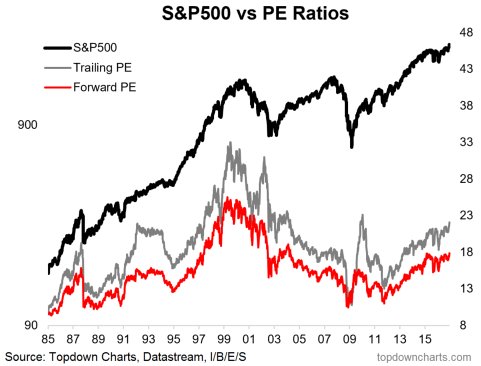 One final chart that compares the current S&P 500 breakout to those in 1980 and 1950.  If the markets follow these trends, it will be a fun trip which could last several years.[i] 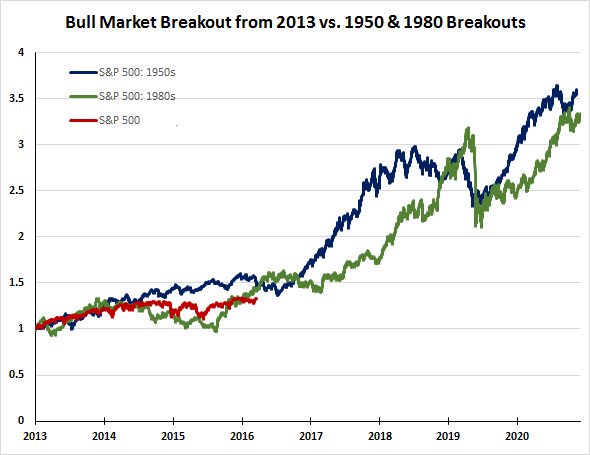 As the markets close out 2016, change is coming.  An important one will be a shift from a loose monetary policy with a tight fiscal policy to a tight monetary policy combined with a loose fiscal policy.  The markets have adjusted somewhat to this but there will probably be unanticipated delays and wrinkles which could cause problems.
We don’t expect anything too drastic before year-end, but would be flexible into the New Year.  Reducing risk in the middle to late January might be good timing.  The old Wall Street adage is to “buy the rumor and sell the news” or once the anticipated event happens, it’s time to sell.   The inauguration and first few weeks of the new administration might fit the “news” part of this advice.
We wish everyone a happy holiday season and best wishes in the New Year.
Jeffrey J. Kerr, CFA
[1] GaveKal Capital, December, 2016
[1] The Bespoke Report, December 16, 2017
[1]Topdown Charts, December 16, 2016
[1] Ibid
[1] Ibid
https://kerrfinancial.com/wp-content/uploads/2017/12/ab4a5334-6312-4710-88e0-8725be1ce136.jpg 600 800 spowell http://kerrfinancial.com.c1.previewmysite.com/wp-content/uploads/2017/12/kerr-logo.jpg spowell2016-12-06 16:20:192017-12-18 16:21:12It's the Most Wonderful Time of the Year
0 replies

Be Careful What You Wish For, You Might Get It

Extra, Extra, Read All About It!
Scroll to top