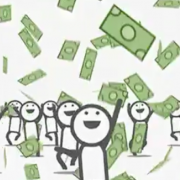 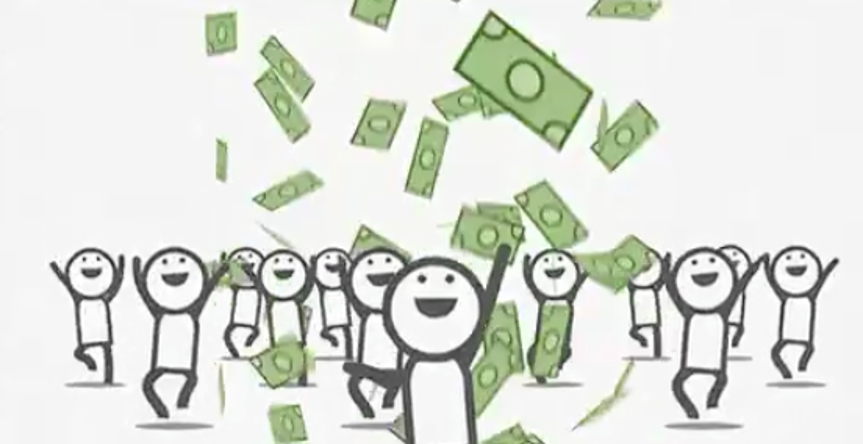 The stock market is having a great start to 2020 which, of course, follows an outstanding 2019.  The large cap indexes are up 1.5% or more in the first 17 trading days.  The Dow Jones Industrial Average closed over 29,000 for the first time and the Nasdaq rallied above 9,000 also for the first time. The S&P 500 has had only 6 down closes since the start of the year.

Oddly, it’s become necessary to publicize these kinds of financial market developments.  Since the stock market has been on a steady upswing since Labor Day, the public has been infected with a sense that the markets can only go up.  Of course, this is not true but the human mind can be strong and convince us of untruths.  As a reminder, high levels of complacency can be dangerous as the stock market is risky, especially as prices move higher.

In addition to contentment, investors have been overwhelmed by other important headlines.  The elimination of Qasem Soleimani and Iran’s retaliation certainly deserved the country’s attention.  And calls by the talking heads that we were on the brink of World War III also caused many to focus outside the day’s financial news.

Naturally, the impeachment of President Trump is an important event. This is a historic period in time with significant cultural division approaching civil war type emotions.  Nevertheless, the impeachment hearings might not be as big a distraction as the broadcast of the proceedings captured few viewers.  Afternoon soap opera ratings were higher than the Democrats’ argument for removing the president.

Beyond these issues, there has been plenty of exciting football with the college bowl games followed by the NFL playoffs.  Further, we’ve had the resignation of Prince Harry and Meaghan Markle from the Royal Family (Megxit), the hypocrisy of Davos, and the possibility of Brad and Jennifer getting back together.  That’s clearly a full plate and tough competition for repetitive all-time highs in the stock market.

As challenging as it is, many are squeezing in the time to keep an eye on the markets.  In summary, they are seeing stocks moving up and interest rates moving down.  As mentioned, equities had a strong finish to 2019 which has continued in 2020.  The leaders have been large companies, the technology sector, and growth stocks.  Here are how the major averages are performing for 2020.

The most unexpected stock market news in 2020 is that the Dow Jones Utility Index is the best performing index year-to-date.  The “Utes” are up 6% in 2020.  A utility is considered a slow growth company and these stocks are viewed as defensive investments.  They are the antithesis of technology and momentum stocks.

The rate a utility charges their customer is usually controlled by a state government or commission so revenue growth is often controlled.  Moreover, these businesses typically carry high debt levels as they borrow to build long-lived infrastructure from which they supply their customers the electricity, water, gas, etc.

Ironically, it is this large debt load, usually a drag on a company, that is helping.  Because of their debt, utilities are sensitive to interest rates – lower rates equals lower interest expense and vice versa.  Interest rates have fallen throughout January and investors have been buying utilities.

Concerning interest rates, the 10-year Treasury yield began the month around 1.9% and closed last Friday at 1.64%.  This is a big drop in the fixed income market and it helped energize the utilities index.  The 30-year Treasury bond’s yield has fallen from around 2.4% to below 2.1%.

The Federal Reserve has played a role in both the stock markets’ rise and the decline in interest rates.  Since September the Fed has been providing the financial system liquidity through a short-term interbank lending system referred to as the repo market.  “Repo” is short for purchase agreement and it is a loan from one bank to another in exchange for collateral (often Treasury bills).  These transactions are short term, often overnight.

Normally, banks work out imbalances between themselves via the repo market although the Fed has played the role of lender of last resort if needed.  For the first time since the financial crisis 10 years ago, the Fed became active in this market.  There hasn’t been a clear reason why they suddenly got involved.  Some theories center on regulatory requirements surrounding the collateral and liquidity thresholds that banks are to keep.

Whatever the circumstances behind this development, there is no debate that the Fed’s involvement has injected liquidity into the system.  The Fed insists that this is not another round of “quantitative easing” and further believe that it will be temporary.  While the mechanics are different from prior QE efforts, the result looks similar to other stimulus programs.

Below is a chart showing the size of the Federal Reserve’s balance sheet.  As can be seen, it was steady at around $4.5 trillion from 2015 through 2017.  As was announced by the Chairman Powell, there was a move to reduce the size of the assets in 2018 which coincided with capital market turmoil in late 2018.  This translates into the financial system getting disrupted when the Fed raised interest rates and withdrew money from the system. 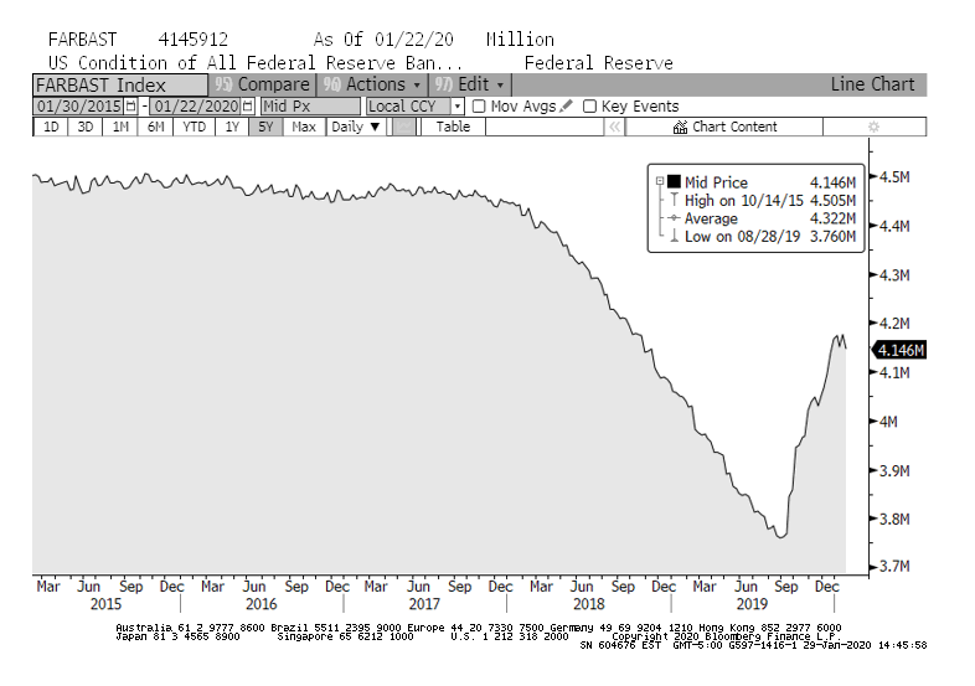 Even if the Fed is not considering their repo involvement a formal policy, the markets think it is close enough.  The stimulus is at the short end of the fixed income market but indirectly impacts longer maturities and lowers yields.  Lower yields reduce corporate interest expenses and improve bottom lines.  In general, easy money helps economic activity which drives stock prices.

There is an appearance that the Fed has generated a financial utopia.  However, creating money (without corresponding value) and pushing it into the system cannot go on forever.  It can cause misallocations of capital which can lead to bubbles.

For now, that does not appear to be a concern.  Confidence in the Fed is boundless and the capital markets are clearly seeing a glass half full.  Nevertheless, there are many economic blemishes.  The global economy is struggling, citizen led protests are everywhere, and geopolitical tensions are high.  Apparently, investors think these issues have little consequence.  Let’s hope it’s not a case of too much focus on the Royal family.

“Enthusiasm is the electricity of life” – Gordon Parks
Scroll to top