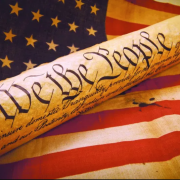 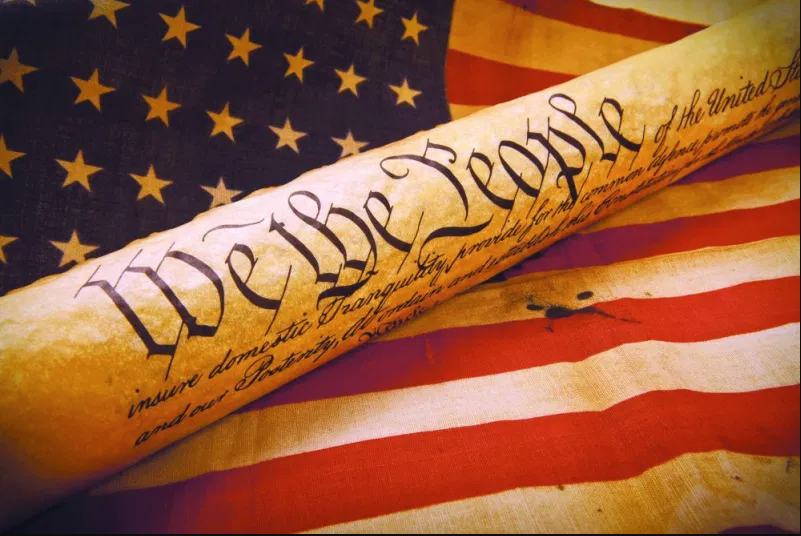 The battle between individual freedom and the public good is rarely at rest.  But in 2020, of course, this friction has erupted into an out of control, five alarm fire.  An economic shutdown and quarantine requirements were enforced as government officials accessed the situation.  It’s unclear what risk analysis was undertaken but it’s unmistakable that individual freedoms were sacrificed for the public good.

As the world tried to navigate the pandemic, the daily count of cases and deaths was the focus.  This is a direct and easy to understand measurement.  Other costs of the shutdown are harder to quantify and they were not widely discussed.  In economic terms, GDP might be an acceptable approximation.  But looking at the cost in terms of increased mental illness, abuse, depression, and suicide has not been widely examined.  Granted, these are complicated, but they were clearly deemphasized.

The lack of balance between the individual and the state combined with the historic social division and an economic shutdown has resulted in extraordinary times and unprecedented uncertainty.  A logical person would conclude the capital markets were in chaos.

Of course, there was an equally historic plunge preceding this surge.  As stocks have returned to record levels, it is easy to forget the pain of late February into March.  The S&P 500 dropped 34% in 5 weeks.  The day after what subsequently became the bottom in the stock market (March 24th), The Wall Street Journal’s headline declared “Markets Melt Down at Fastest Pace Ever”.

What a ride is has been!  Putting these developments into a picture, below is a chart of the S&P 500 for the past 12 months.

S&P 500 closed last week at a record high and it was the 4th consecutive week of advancing.  Here are the year-to-date returns for the major averages as of August 21st.

The bounce from the March lows has been momentous but also selective.  Large cap technology stocks (Nasdaq) have been the big winners with Apple, Amazon, Facebook, Microsoft and Google responsible for most of the lifting.  Apple recently became the first company to reach a $2 trillion valuation.

The narrowness of the rally is also shown in the difference between the performance of the Nasdaq Composite and the S&P 500.  The Nasdaq had outperformed the S&P 500 by over 25 percentage points.  While there is overlap within the composition of both indexes, especially among the largest companies, S&P has less concentration in technology and consequently it is lagging the Nasdaq.  The Russell 2000, which is mostly smaller companies, is trailing the Nasdaq by over 33 percentage points.

As wide as the gap is between the Nasdaq and Russell, it’s nothing compared to the abyss between Wall Street and Main Street.  While the Nasdaq has made over 30 record highs, much of the economy is straining to stay afloat.

Stores and restaurants form the foundation of Main Street and they have been destroyed by the shutdown.  Retailing and operating a restaurant are difficult ventures in a good economy but are exponentially harder now.  Aaron Allen & Associates, industry consultants, expect 35% of U.S restaurants to permanently close.

It’s a similar story for retailers as many have filed bankruptcy.  Some of the iconic names are J.C. Penney, Lord + Taylor, J. Crew, Brooks Brothers, and Modell’s.  Including all businesses, 2020 is seeing record bankruptcies.  Below is a chart with the number of companies filing this year through August 9th.  2020 trails 2010 but this year could easily exceed the record as forbearances end. 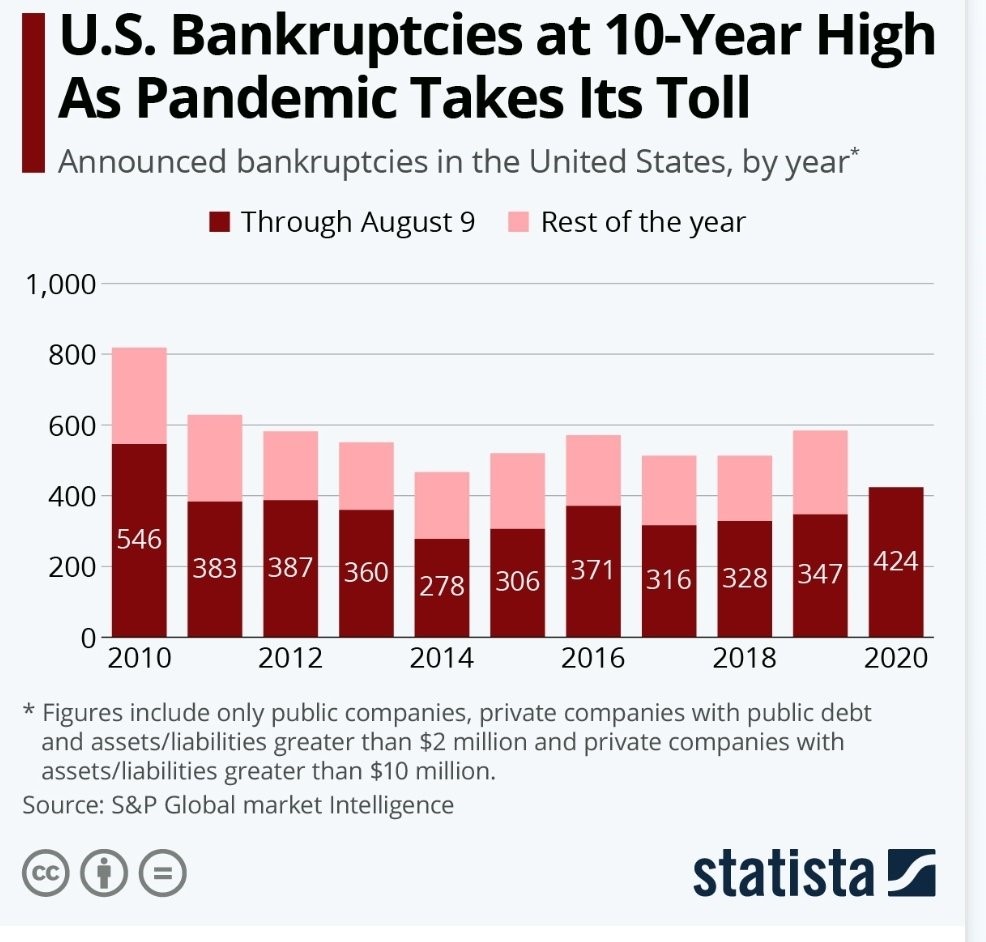 With record unemployment and economic uncertainty, consumers could reduce spending habits for an extended period.  The pain would travel past stores and eateries to such things as cars, travel, and entertainment.  As a reminder, our pre-Covid economy was highly dependent on consumption and a timid consumer would hurt any recovery.

As a possible sign of things to come, here is a chart that compares the unemployment rate with the delinquency rate on consumer loans.  The data covers over 50 years and there is a material correlation between the two.  Consumer loans include loans such as personal, car, home equity, and property improvement. 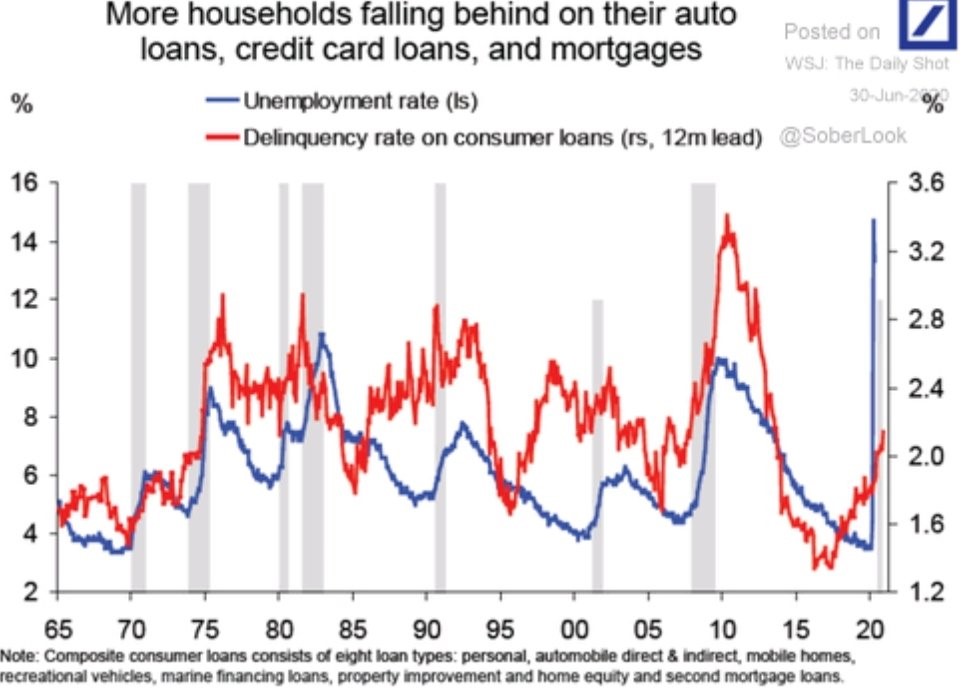 This brings us back to the seemingly universal question, why is the stock market doing well when everything is so bad.  A partial explanation is the confidence in a quick and strong recovery after the shutdown ends.  This might happen but it gets more priced in every day that stocks rise as the shutdown lingers.  This could result in disappointment if we don’t rebound or do get a second wave of the virus.

Another important boost for the capital markets is the Fed.  Besides the stimulus programs by the federal government, the Fed has been active in the bond market by buying bonds and providing systemic liquidity.

The Federal Reserve can print money, and this is an important tool.  The markets understand it and have responded by rising.  There will be unintended consequences but Jerome Powell and staff are willing to take that chance.  If investors remain confident in their abilities, the markets will continue to behave.  On the other hand, any doubts by Mr. Market will be tumultuous.

Whether designed or not, 2020 has produced a series of events that have disrupted society and appear to be threatening the foundation of the United States.  Censorship vs. freedom of speech, economic authoritarianism vs. opening the economy, and Democrats vs. Republicans to name a few.  Our country has survived other chaotic situations and frenzied challenges.  It’s a good bet that we do it again.  The markets are counting on it.

“We Steal From the Rich and Give to the Poor”

“Now I Know My ABC’s, Next Time Won’t You Sing With Me”
Scroll to top