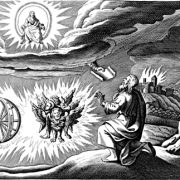 “There Shall be Disaster After Disaster, Rumor After Rumor”[i]

Contrary to what you might expect, the above is not a recent CNN headline describing the Trump administration. Rather it was written around 600 B.C. by the profit Ezekiel, who was exiled to Babylon. He was describing his vision of the unthinkable decline and ruin of Jerusalem which ultimately took place. It was an accurate description of what took place 2,000 years ago and, remarkably, today’s current events.

While it seems that we are undergoing a modern fulfillment of Ezekiel’s prophecy, it is amazing that this has had no impact on the capital markets. The stock market is within a few percentage points of all-time highs, bond yields have fallen, and the dollar has been drifting lower.

The stock markets below the surface view, however, is less tranquil. The Dow Jones Transportation Average peaked out in July and as of August 24th had given up all of 2017’s gains (it bounced higher last week).

Smaller cap stocks have also been moving lower. The Russell 2000, S&P Smallcap 600 and S&P Midcap 400 declined in August and all three indexes are lower for the 3rd quarter. The Russell, as measured from the July high to the August low, fell 6.4% in 4 weeks.

Even within the S&P 500 (large cap index), there’s some blemishes as the smallest of these large companies are lagging. When the index is broken into deciles by market cap size, incredibly the 10th decile (the smallest market cap of the 500 stocks) is down 2.11% year-to-date. Contrasting this with the entire S&P 500’s 10% year-to-date gain, the under-performance is shocking.

Of course, the S&P 500 has FANG which has pushed the index. FANG is the anacronym for current stock market darlings Facebook, Apple and Amazon, Netflix, and Google. And as the index is weighted by market cap, the larger companies have a bigger influence. With Facebook, Apple, Amazon, and Google (Alphabet) all in the top 10 market values, they have been especially influential as these stocks are materially higher for the year.

Also, the trend toward passive investing has a self-fulfilling aspect as the S&P 500 is a popular way to gain equity exposure in this approach. And when money goes into the index it buys more Apple, Amazon, Google, etc.

Here are the year-to-date numbers for the major indexes. Note the disparity between the Russell and the Nasdaq. Is this a sign that the broader market is weakening and the bigger stocks will follow? Or is this an opportunity for contrarian investors to enter the small cap market?

The Nasdaq’s 2017 gains are noteworthy and, as expected, this has pushed the size of the technology sector to 23.5% of the S&P 500. It would be even greater if Amazon was considered a tech stock. It might be natural to assume that technology’s popularity has pushed the sector’s valuation to unreasonable levels. Surprisingly, this is not the case. The current P/E based on trailing earnings is around 23. As the chart below shows, this is slightly above the average of the past 20 years.[ii]

Another important stock market trend for 2017 is the significant lagging of value stocks as compared to growth stocks. Below is another Bespoke chart illustrating this difference.[iii] While this only accounts for stocks within the S&P 500, the spread is not typically this wide. As mentioned with the disparity of large cap vs. small cap, there will be a time when value investing outperforms growth.

The capital markets are facing many economic, political, and societal crosscurrents. And they are doing it at a historically troubling time of the year as September and October can be volatile months for the markets. That the markets have not suffered any significant setbacks given developments such as Charlottesville, North Korea, a possible U.S. federal government shutdown, and Hurricane Harvey is confounding. Maybe it’s a sign of underlying strength or it could be a delayed reaction with forthcoming pain.

Regardless of what the financial markets do, our thoughts and prayers are with those impacted by Harvey and those who will be hurt by Irma.

“Yes It’s Been Quite a Summer, Rent-a-cars and West Bound Train... “The Smiles Are Returning To the Faces”[i]
Scroll to top