Central banks from England to Australia have been busy suppressing interest rates and buying bonds.  Although the European Central Bank’s (ECB) mandate may differ from the Bank of Japan (BOJ) which is different from the Federal Reserve’s, all are deeply involved in the global markets.  (Mandates typically range from price stability and economic growth to full employment.)

The markets have long understood that central bank policies influence the economy and, consequently, corporate earnings.  In recent years, however, this has risen to a hyper sensitive level.  Short term movements seem to be driven by statements, speeches and policymaker appearances.  Stocks drop whenever a member of the central banker sneezes and rally with any hint that interest rate increases will be delayed.

The markets’ obsession with the Fed, ECB, BOJ, PBOC (China), and et al. are understandable but also puzzling.  As mentioned, monetary policy influences the economy which impacts corporate earnings which drive stock prices.  Despite this ‘hip bone connected to the thigh bone’ situation, policymakers, like everyone else, are pretty bad forecasters.  Otherwise we wouldn’t have needed a countless string of QE programs in the U.S. and the European mess would have been solved years ago.

Going back further, it is the Fed’s responsibility to avoid a financial crises not just plot a recovery.  The Federal Reserve was formed 100 years ago as a response to the Panic of 1907.  This crisis involved bank runs and failures, a 50% drop in the stock market, a near collapse of the stock exchanges, and a severe recession.  Business and government leaders agreed to form a central bank to guard against future calamities.  Obviously, reviewing the financial history of the past 100 years, success has not always been accomplished.

Given the long strange trip that the Fed has chosen, perhaps they should be viewed as part of the problem rather than the solution.  As we know, interest rates are a critical piece of the economic system.  They help assign a price to risk as higher financing and capital costs are associated with riskier situations.  Also interest rates reward the postponement of consumption and savings.

These are just a couple of the important roles that interest rates play.  However, if rates are being unnaturally influenced, normal economic relationships are distorted.  As Jim Grant observed, “With one hand, the Fed is manipulating interest rates, therefore the value of the myriad financial claims tied to interest rates.”[i]

While this is not suggesting that stocks are overvalued, it does emphasize that the Fed’s role in the markets have influenced stock and bond prices.  The markets have adjusted to this.  However, it becomes an additional wrinkle (risk) as they allow interest rates to return to being market driven.  In other words, we question the Fed’s level of confidence in their ability to simply and easily transition back to the pre-crisis landscape.

The recent astounding sell off for the German 10-year Bund (equivalent to the U.S. 10-year note) might be a glimpse of what could happen.  On April 20th the Bund recorded a record low yield of 0.07% – attention please – that yield means bondholders get 70 cents of annual interest for a $1,000 investment!!  Less than a dollar a year!!

The yield spiked to 0.608% by the first week of May which equals an 87% move within a couple of weeks.  Clearly, the market was overbought. This was a result of trader and hedge fund buying earlier in the year after Mario Draghi and the ECB announced a quantitative easing that would involve bond purchases.  Apparently by May, there were no buyers left and the leveraged holders could not all find seats when the music stopped.

Charles Gave of GaveKal Research observed, “The broader message is that markets can become awfully unstable as a result of central bank actions to try and manage asset prices.  The argument I made a few weeks ago was that the effort of central banks to suppress volatility was creating dangerous feedback loop…”[ii]  Central banks should be careful what they strive to do – they may end up with the exact opposite result.

Beyond the securities markets, the Fed’s policy has changed strategic planning as businessmen and women are rewarded to act differently than normal.  Why invest in riskier options such as starting or expanding a business when the markets reward other decisions such as borrowing money at low rates to buy back their stock (in the case of publicly traded businesses) or buy out another.

This has the unfortunate consequences of subduing incomes and job growth.  For example, there are fewer full time U.S. workers than in 2007 at the same time as part time jobs has risen by 2.5 million.[iii]

While the merits of world central banks policies are debatable, there is no doubt that they are deeply involved in the financial markets.  And as mentioned, every central banker’s word and facial expression is viewed with a magnifying glass.  To that end, we thought this piece from The New Yorker illustrates that the Fed even comes up at a wine tasting.[iv] 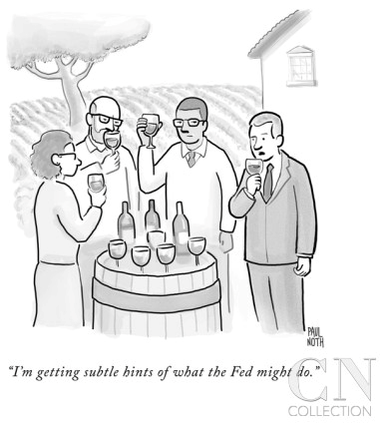 Turning to the stock market, the U.S. averages have been grinding slightly higher while trading in an upward sloping range.  Selloffs in January and March, which looked as if they would lead to larger declines, were contained, prices stabilized and plodded higher.  The Nasdaq has is having a good year and is leading the major averages.

There are some wide divergences within different sectors of the U.S. stock markets.  The Dow Jones Transportation Average is down 9.2% and the Dow Jones Utility Average has declined 5% year-to-date.  The Transportation Average has been pressured by the rumors of airfare discounts and some disappointing economic numbers.  The potential of higher interest rates is a headwind for the Utility Average.

Returning to our shores, U.S. markets are digesting soggy economic numbers and the prospect of the higher interest rates.  The long, brutal winter is part of the blame for below target GDP estimates for the first quarter.  Housing, auto, and retail are specifically blaming weather as well as the Los Angeles port strike.  Forecasts for the 2nd half of 2015 are for higher levels of growth as we get past the effects of the weather and reap the benefits of lower energy prices.

Concerning interest rates, we turn to the Federal Reserve once more.  Everyone on Wall Street knows that they will gradually start raising rates but the debate is centered on when it begins.  And as the feeble economic numbers hit the news wires, predictions keep getting pushed further into the future.

U.S. valuations are another market anxiety.  We know, thanks to the Fed, that Treasuries are overvalued.  Stocks are fully valued at a minimum with some pundits throwing around the “bubble” term.  We don’t think there is a widespread bubble but there are certain sectors that are generously priced.

Stocks in the U.S. have been resilient so far during 2015.  We feel that economic growth will be an important component to drive equities higher.  If GDP can match predictions for 3% annualized growth in the second half of the year, it should help the stock market.

The international markets might continue to offer opportunities.  Japan, for example, has undergone a change of their corporate culture.  They are starting to do such things as share buybacks and dividend increases to better enhance shareholder value.  Further, monetary policy remains growth supportive.  The world’s third largest economy is leading the way in developments of robotics as well as automobile technology (sensors, autonomous navigation, etc.).

As with the U.S., the global business community will adapt to whatever foolish things the policymakers and politicians do and figure out how to succeed.  And contrary to conventional wisdom, maybe higher rates stimulate businesses to reinvest and grow their operations.  An economy that is free of suppression and intervention might actually operate ok.

Jeffrey Kerr is a Registered Representative of and securities are offered through LaSalle St. Securities LLC, member FINRA/SIPC. Mr. Kerr is an Investment Advisor Representative of and advisory services are offered through Kildare Asset Management, a Registered Investment Advisor. Kerr Financial Group and Kildare Asset Management are not affiliated with LaSalle St. Securities LLC.

The opinions voiced in this material are for general information only and are not intended to provide specific advice or recommendations for any individual. Past performance is not indicative of future results. Investing involves risks, including the risk of principal loss. The strategies discussed do not ensure success or guarantee against loss. This information should not be construed as investment, tax or legal advice and may not be relied on for the purpose of avoiding any Federal tax penalty. The Dow Jones Industrial Average is a price-weighted index of 30 actively traded blue-chip stocks.  The Standard & Poor’s 500 (S&P 500) is an unmanaged group of securities considered to be representative of the stock market in general. It is not possible to invest directly in an index.  Trading of derivative products such as options, futures or exchange traded funds involves significant risks and it is important to fully understand the risks and consequences involved before investing in these products. All information is believed to be from reliable sources; however we make no representation as to its completeness or accuracy. All economic and performance data is historical and not indicative of future results. Market indices discussed are unmanaged. Investors cannot invest in unmanaged indices. If assistance is needed, the reader is advised to engage the services of a competent professional

“There are decades where nothing happens; and there are weeks when decades... “Which Way Should I Go?”[i]
Scroll to top