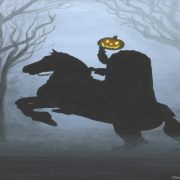 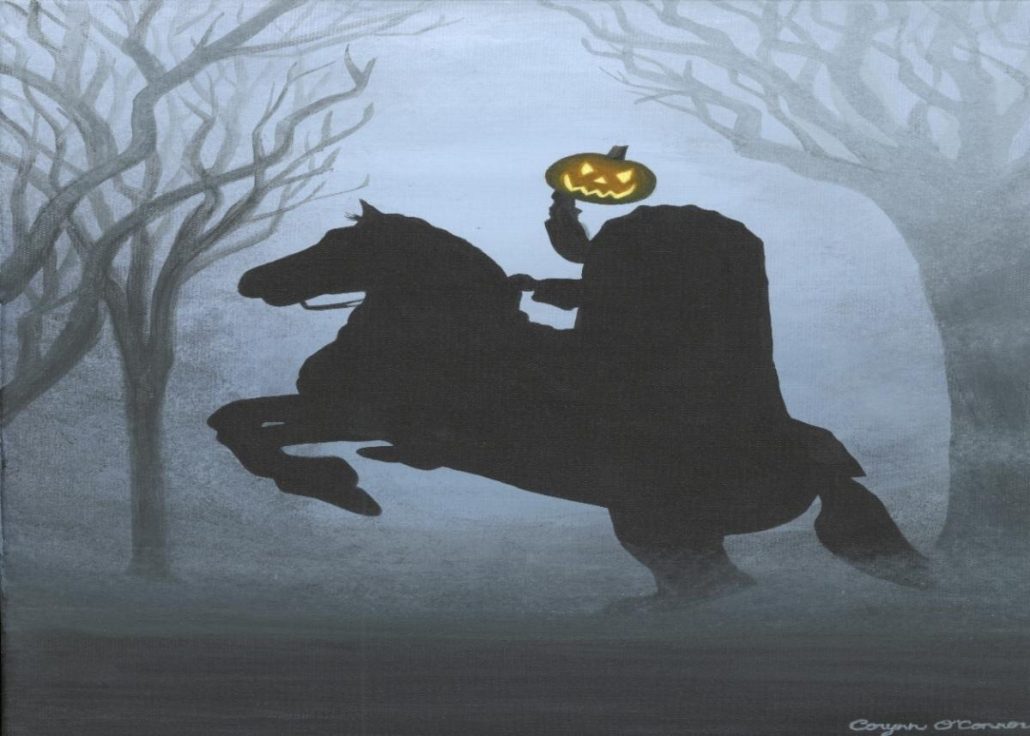 “…where the water ran deep and black, was found the hat of the unfortunate Ichabod, and close beside it a shattered pumpkin.”

Halloween involves things like trick-or-treating, dressing up in costumes, playing pranks, scary stories and haunted houses. While it is an annual occurrence that takes place in late October, given the events during the past few years, it appears that Halloween traditions have become a year round, ongoing part of our culture.

For those in search of haunted houses, look no further than Washington, D.C. There is plenty of demonic activity taking place in both houses of Congress, the White House, the FBI, CIA, and, of course, the Federal Reserve.

When it comes to trick-or-treating, it’s hard to compete with Robert Mueller and James Comey.  However, the crew of politicians seeking the Democratic nomination certainly deserve consideration for tops in this category. And the most recent entry of LeBron James and the NBA choosing to protect their wallets over human rights is making its way higher on the list. The financial markets have negative interest rates which might be the cruelest trick of all.

The capital markets have a history of frightening Octobers. Two stock market crashes plus things such as the failure of Long Term Capital Management and Lehman Brothers were autumn happenings. As recent as last year, October was a painful beginning to a miserable end of the year.

The start to this year’s October was a rough one as the markets fell hard. The major averages dropped around 3% in just the first two trading days of October. This was on top of some stock market weakness in the second half of September. Justifiably, traders began to chatter about another nightmarish October. But by the end of October’s first week the stock market stabilized and started to move higher.

The major averages were approaching the mid-September highs at the close of last week. As a reminder, these levels are still below the all-time highs reached in July and are only modestly above where prices were last October. Here are the year-to-date returns for the major averages.

Interest rates, which have been declining all year, have been a big driver of stock prices. Lower yields are partially a function of slowing economic growth. However, the Federal Reserve’s switch in strategy from tightening to interest rate cuts and more stimulus has played a large role in the markets.

Besides this policy pivot, there has been a great deal of angst over an explosion in the amount of money borrowed in the repo market. First, the repo (repurchase) market is where funds are loaned and borrowed between banks for short term purposes. It is often an overnight arrangement where one institution has too much cash and another has a shortfall as measured by banking regulations. They enter into a deal in which the lender sends cash to the borrower in exchange for high quality securities (typically treasury notes) with the condition that this loan will be reversed and unwound at some date in the future.

The Federal Reserve has a role in this market as the party that borrowers can come to. However, the Fed is considered the last option as it carries the stigma that the borrower can’t find funds through normal options.

In mid-September the overnight borrowing rates between banks ran into problems and rates spiked. The Fed stepped in and went from being a behind the scenes observer to the major supplier of funds. Below is a chart showing the spike in borrowing from the Fed. 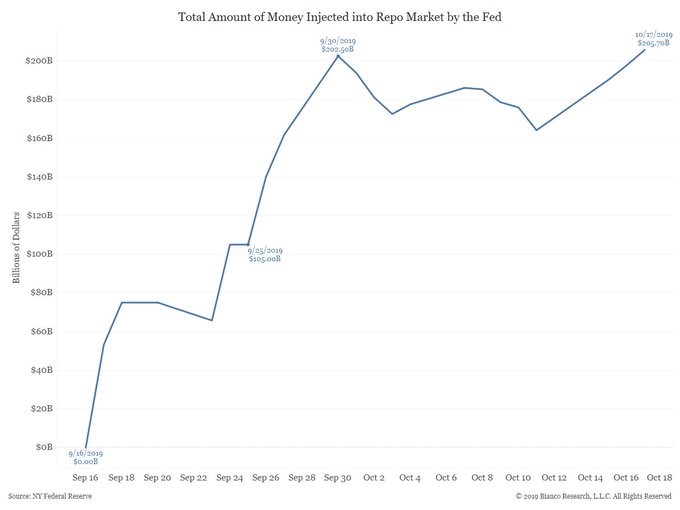 The Fed’s explanation included things such as seasonal funding needs by banks and that they expected this condition to only be temporary. Skeptics called it another form of QE and questioned if some large financial institution is impaired.

More likely it seems that banks with more than sufficient liquidity began to hold the cash rather than enter into a short term loan. In other words, banks are hoarding cash. Part of the reasoning behind this is increased regulations from the financial crisis on liquidity levels and the quality of banking collateral. Of course, it’s possible that the banks see a problem ahead and are positioning for it.

The Fed’s repo window hasn’t been used at this level since the financial crisis. Naturally, that draws comparisons together with concerns that another systemic problem is around the corner. The Fed dismisses these worries and forecasts a return to normal conditions soon.

Regardless the specific reasons for this spike in Fed repos, one of the obvious results is a significant increase of money in the financial system. Logically, some of this liquidity finds its way into the capital markets which usually means higher prices.

Another forthcoming monetary easing event is a Fed decision which, ironically, will be on Halloween. There is wide belief that Jerome Powell and the committee will cut short term interest rates again. Our monetary leaders have a long history of telegraphing their decision and since many traders are anticipating a cut, it’s unlikely that they change their mind.

Fed critics (there are many) question the need to cut interest rates and inject money into the system when unemployment is near record low levels and the economy is expanding. The extension of this worry is that cutting rates now wastes their ammunition. And when something bad does happen, they will have limited options and the situation will deteriorate further.

Central bank supporters are optimistic that proactive decisions will help avoid any problem. Further, we must keep in mind that the U.S. dollar is the world’s reserve currency and, consequently, the Fed plays a partial role as global central banker. Within this context, there are many economically troubled areas throughout the worldwide system. Agree or not, the Fed is aware of this interconnected backdrop.

This likely results in more easing at some point in the future. While this could eventually lead to bigger and far reaching financial problems, it could, in the short run, bring higher asset prices.

Scary stories fill the history of financial markets in the month of October. While the beginning of the 2019 version looked like a repeat of previous spooky spells, things have been surprisingly pleasant. It’s always possible that someone or something suddenly yells “Boo!” and shocks everyone. In the meantime, it looks like a good time for gathering treats with ­little fear of the tricks.

[i] “The Legend of Sleepy Hallow”, Washington Irving

“In Everything, Give Thanks”
Scroll to top