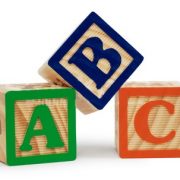 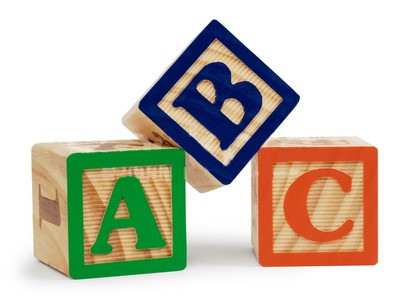 “Now I Know My ABC’s, Next Time Won’t You Sing With Me”

Meteorology has run out of letters.  The process of naming tropical storms and hurricanes has reached the end of the alphabetical runway and this has forced weather people to move to Greek letters.  To be sure, range of storms that are named is wider and the threshold is lower than in the past.  Nevertheless, it becomes another amazing event of 2020.

It’s unclear if this will have any impact the current ongoing civil war, but things are so acrimonious even an insignificant blip like this can push people over the edge.  The New York Times will report that it’s all President Trump’s fault for not instituting more letters to our alphabet.  FOX News will proclaim that the Democrats wouldn’t allow an expanded alphabet without additional funding for Central Park’s barley farmers.

Ruth Bader Ginsburg’s death will also sharpen the differences between the country’s polarized groups.  Controversy on confirming her replacement will add to the extraordinary and lengthy list of events making 2020 an astonishing year.

Impeachment, COVID, economic shutdown, protests, riots, job losses, and all the stressful issues have impacted everyone.  Fatigue is commonplace.  The graph below is from the Pew Research Center and shows America’s anger, frustration, and dissatisfaction.  With so much disagreement within our society, it is easy to understand that 87% of respondents were dissatisfied “with the way things are going in this country today”.  As shown, this is up from the 68% area where it has been for the past 3 years.

Further, when having to choose between “Angry”, “Fearful”, “Hopeful”, and “Proud” as the answer to “in thinking about the state of the country these days”, a wide majority say they feel “Angry” and “Fearful”.  It’s not a surprise to see that the answer “Proud” was a distant last.  It will be a societal marathon to return to anything resembling togetherness, but the United States has faced enormous challenges and will survive. 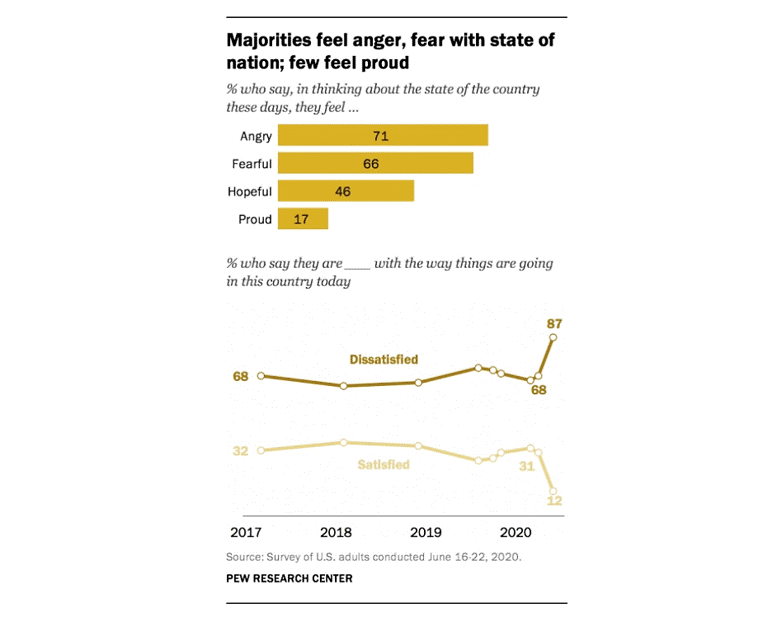 Another disconcerting divide is the one between Main Street and Wall Street.  Job losses continue grow, people battle to pay their bills, and businesses struggle to re-open.  At the same time, the stock market reached all-time highs in early September.

The capital markets are obviously expecting a quick and far reaching economic rebound.  The popular cliché is a “V” shaped recovery with the letter “V” representing the direction of the economy (sudden and sharp drop followed by a quick recovery to its previous levels).  It’s what the stock market is counting on.

Naturally, there are some less optimistic forecasts.  Staying with the alphabet, some are predicting a “W” recovery.  In other words, a sharp decline followed by a recovery that peaks at a much lower level.  This is followed by a return to the depths of the recession which is then followed by a complete recovery of the previous high level of economic activity.  The “W” recovery normally has a much longer timeline as compared to a “V” shaped bounce with more pain in finding a base where the system can bounce from.

Another letter that is used for economic predictions is “U”.  This is an unpopular character as it suggests that, after the initial drop in the economy, activity stays weak and bounces around the lower level for an extended period.  When the recovery finally arrives, it takes the economy back to previous strong levels.  Again, this is not an enjoyable process.

Some are pointing to a fourth alternative that is represented by the letter “K”.  This is a complicated scenario and is illustrated below.  As shown, economic activity bounces as the shutdown is lifted.  However, after the initial push, the system fragments into two paths with diverse outcomes for various sectors of our society.

According to JP Morgan, demographic groups like the wealthy and white-collar workers will do well.  On the other hand, the middle class, blue collar, and small businesses suffer as these groups encounter further headwinds and don’t benefit from the Fed’s programs and Washington’s bailout of large companies.  Under this development, there would likely be more social division rather than healing.  The paths of economic convergence after the separation have many and unpredictable possibilities. 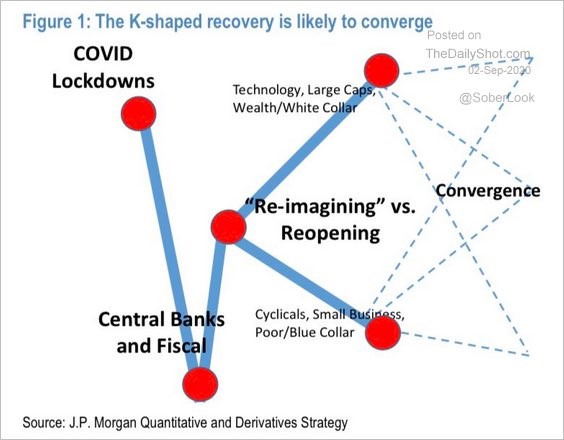 The “W”, “U” and “K” scenarios are the least desirable and maybe the stock market is realizing that the “V” is far from certain.  After peaking in early September, the Dow Jones Industrial Average and S&P 500 have declined 4 weeks in a row.  The Nasdaq had a small gain last week after falling for 3 consecutive weeks.  The major indexes fell below their 50-day moving averages for the first time since April.

Despite the recent dip, the stock market benchmarks remain near record highs.  Here are the year-to-date returns for the major averages as of September 25th.

After a bounce in economic data during the summer, there are signs of slowing.  Initial jobless claims last week were 870,000.  Although this was higher than forecast, the number has been declining in recent weeks and the 4-week moving average is at 878,250.  Nevertheless, this number means that almost 1 million people are filing for unemployment benefits for the first time each week.  This needs to be a lot lower in order for the economy to return to normal conditions.

August’s reported unemployment rate was 8.4%.  This was a significant decline from 10.2% in July and was below the forecasted 9.8% level.  As the economy reopens, the number of people returning to work naturally increases and the unemployment rate decreases.  The headwind to future progress in this area is the prospect of small businesses not reopening.  This number will have a material multiplier effect on the economy.

The Conference Board’s Leading Economic Index reading rose 1.2 percent in August to 106.5.  That is good but is lower that July’s 2 percent gain and June’s 3.1 percent increase.  The press release included the following, ““While the US LEI increased again in August, the slowing pace of improvement suggests that this summer’s economic rebound may be losing steam heading into the final stretch of 2020”.

As troublesome as the current state of society is, there is a good chance it worsens.  The replacement for Justice Ruth Bader Ginsburg, the presidential campaign, the ongoing protests and riots, and a contested election are events that we must work through in the next couple of months.  It’s easy to think that these developments will contribute to our country’s angst.

How this impacts the economy and the markets is a difficult forecast.  Stocks have set records in the face of cities being burned and a modern civil war.  Perhaps the capital markets can continue to move higher despite our discord.  However, some worry that like running out of letters in the alphabet, the financial markets will run out of optimism over the arrival of cultural healing and a rebounding economy.

“You can look around and there’s not a sign of hypocrisy. Nothing but...
Scroll to top