Since the beginning of 2013 many investors have been hoping for a correction or some sort of meaningful decline.  The stock market started last year with a bang and steadily and constantly climbed for the rest of the year.  This move extended the advance that hasn’t contained a normal 10% or greater pullback and naturally, added to the frustration of the crowd on the sidelines waiting for a “better” entry point.

Upon the arrival of 2014 prices finally broke.  While the pullback was somewhat minor as historical corrections are measured, it was nevertheless greeted not with a welcome embrace but with angst and fear.  The bigger worry is not that a 3% – 5% retracement happened but instead that it caused such pandemonium.  It would seem logical that following the 30% advance in the prior 12 months a correction would be expected.  Further is should be viewed as helpful as it would strengthen the long term health of the move.

According to WSJ Market Data Group, the Dow Jones Industrial Average’s January performance has predicted the full-year direction 87 times in the last 116 years (75%).  On the years of a January down Dow, the blue chip index was lower 26 of those 42 years (62%).  Interestingly, sometimes instead of being predictive, January is an inflection point.  Following a lower January, the Dow is down in the remaining 11 months only 48% of the time.[i]

There is another indicator with higher accuracy and is more foreboding for 2014 – the “December Low Indicator”.  This watches the Dow’s December low point and forecasts a down year when that level is violated anytime during the first quarter of the New Year.  There have been 31 occurrences since 1950 and in all but 2 years (1996 and 2006) the Dow was lower for the year by an average of 10.9%.[ii]  To add to the worry, there have been only 4 instances (out of 31) of wrong signals when these two indicators are “combined”.

This is not to suggest that we should give up on 2014 as we need to remember that no forecast is foolproof.  Further we have the Fed and other policy makers keeping at least one eye on the financial markets and are ready to act if conditions deteriorate.  This has likely played a roll in the strong rally that stocks have had off last month’s lows.  Also, maybe January was a deviation and the markets have returned to the steady climb that started in late 2012.  However, there are some further signs that imply that 2014 won’t be a rare non-conforming year after January’s signals.

“It’s Midnight in Manhattan, This is No Time to Get Cute”[iii]

Starting in January many market internals have weakened. Such things as market breadth, new highs vs. new lows, and divergences among the indexes are indicating that overall market strength has declined.  The stock market’s breadth (a measure of the number of advancing stocks vs. declining stocks) has narrowed during the recent rally indicating the latest rally has had fewer participants.  Further the number of issues making 52-week highs and 52-week lows has weakened.  Lastly, while the S&P 500, the Dow Jones Transportation Average, and Russell 2000 reached record highs earlier this month, the Dow Jones Industrial Average has yet to exceed the record level reached at the end of 2013.  Here are the year-to-date numbers for the major indexes.

Investor sentiment can have a big influence on asset prices and, currently, we worry that we don’t have enough worry.  Unlike the emotional landscape at the start of 2013, the present mindset is at a minimum complacent and, within sectors, ecstatic.  Readers might find the diagram[i] below helpful in determining where the 2014 capital markets reside.  While we haven’t gotten to the point where all sports bars have channels set to Bloomberg or CNBC, lets see what happens after March Madness.  We are not suggesting the polar vortex is about to target its wrath on stocks and bonds, however, in the short to intermediate term, a correction would clear out investor smugness. 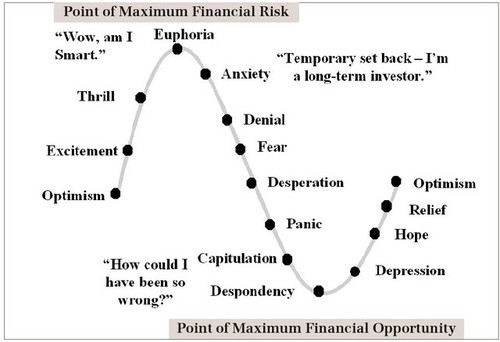 Despite the short term emotional state being too bullish, there is still much skepticism on a longer term time frame.  The financial crisis of 2008-2009 has turned many investors into Mark Twain’s cat.  Namely they view equities the same way that the feline who sat on a hot stove looks at an oven.  In other words, every stove is to be avoided no matter its temperature.  Similarly the scars of the Great Recession are seared into our memories and some think that all stocks are to be shunned.  The good news is that this disdain may provide further fuel for the rally to continue for years to come.

In the meantime, in addition to the tape sending some subtle signals that bear watching, some other developments have our attention.  Under the heading “that the more things change the more they stay the same” we can’t help but think that we have seen this movie before and would prefer to avoid the final scenes.

Specifically some 2014 valuations would make the internet startups of the late 1990’s blush.  Darlings such as Tesla Motors (losing money and selling at 14 times sales), Facebook (P/E = 108 and 17 times sales), Chipotle Mexican Grill (P/E = 58 for Mexican food?), and SolarCity Corp (losing money and 48 times revenue) rival anything from the tech bubble.  Insane valuations can even be found among more mature companies such as Amazon.com.  The company that is dramatically shifting the retail environment changes hands at 609 times earnings.  These valuations assume a lot of future success.

Another Wall Street trick was also recently spotted.  Reminiscent of the late 90’s research on high flying stocks, last month Morgan Stanley doubled its price target on Tesla.  The timing was a little odd being that it happened the day before the company sold a convertible bond.  Yet strangely, as part of the report, the analyst did not change either the sales or earnings estimates.  Nevertheless, the stock jumped 20%.  It’s peculiar that regulators didn’t question the timing of the change or the fact that Morgan Stanley was lead underwriter on the bond deal.

Rising prices result in higher monthly statement balances which in turn help us feel better (and smarter).  But sometimes these feelings cause us to become over confident, take short cuts, and ignore risks.  We don’t know anyone who would do such things, but we are told by reliable sources that it does happen.  Attention to changing developments and disciplined decisions will to be valuable habits for the rest of the 2014.

This information should not be construed as investment, tax or legal advice and may not be relied on for the purpose of avoiding any Federal tax penalty. The Dow Jones Industrial Average is a price-weighted index of 30 actively traded blue-chip stocks. The NASDAQ Composite Index is an unmanaged, market-weighted index of all over-the-counter common stocks traded on the National Association of Securities Dealers Automated Quotation System. The Standard & Poor’s 500 (S&P 500) is an unmanaged group of securities considered to be representative of the stock market in general. The Russell 2000 Index is an unmanaged market-capitalization weighted index measuring the performance of the 2,000 smallest U.S. companies, on a market capitalization basis, in the Russell 3000 index. It is not possible to invest directly in an index. Investing involves risks, including the risk of principal loss. Additional risks are associated with international investing, such as currency fluctuations, political and economic instability and differences in accounting standards. All information is believed to be from reliable sources; however we make no representation as to its completeness or accuracy. All economic and performance data is historical and not indicative of future results. Market indices discussed are unmanaged. Investors cannot invest in unmanaged indices. If assistance is needed, the reader is advised to engage the services of a competent professional.

Past performance does not guarantee future results

“I Took Off For a Weekend Last Month Just To Try To Recall The Whole ... “One dog goes one way, the other dog goes the other way, and this guy’s...
Scroll to top