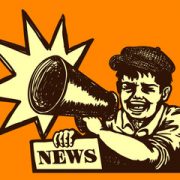 “Extra, Extra, Read All About It”

To borrow a phrase from Ron Burgundy, last week was kind of a big deal.  In the financial markets, we saw 42% of the S&P 500 releasing quarterly results including notable market leaders Amazon, Boeing, ExxonMobil, Facebook, Google (Alphabet), Intel, and Microsoft.  Outside of Wall Street, the heads of North Korea and South Korea shook hands and stepped on each other’s soil for the first time. England’s royal family welcomed a new prince.  And, rivaling all headlines, the Jets drafted a quarterback.  It was truly a remarkable week.

Starting with earnings, they have been very good.  As reported by Bespoke Investment Group (The Bespoke Report, April 27, 2018), over 700 companies have reported earnings and an amazing 73% have beaten analyst estimates.  This is the best beat rate since 2006.  Additionally, 71% of the reports have exceeded revenue estimates which some view as a more important number as it is harder to manipulate.

Of course, a reasonable person would expect these strong results to produce a powerful stock market surge.  It has not.  In fact we’ve gotten the exact opposite as there has been noticeable selling following good earnings reports.  For example, after the markets closed last Thursday, Amazon, Intel and Microsoft reported above expected earnings.  All three jumped in the after-hours trading session with Amazon trading $100 higher (6.5%).  In Friday’s regular trading Amazon share price was higher but closed near the lows of the daily range.  Microsoft closed slightly higher while Intel gave up all of the gains and actually closed lower than Thursday’s level.

Furthermore, this has not been happenstance.  It has been a consistent pattern since 1st quarter earnings reports started as good results have met with strong selling.  Last week’s earnings should have driven prices higher but instead the Dow Jones Industrial Average closed down 0.62% for the week while the Nasdaq dropped 0.37% (the S&P 500 was flat).  While these are not catastrophic losses, they are not a normal reaction positive news.

Including last week’s small dip, here is where the major averages are year-to-date.

Explaining the markets under normal conditions is a futile endeavor.  Explaining this recent paradox is a series of guesses at best.  Nevertheless, investors need to attempt to understand what is going on.  First, markets look forward not backward.  So with these earnings reports being the results of the past three months, they are not as important as what lies ahead.  Perhaps the markets are worried that the future won’t be as strong.

And it doesn’t help that one of the corporate messengers was a little too forthright as was the case in last week’s Caterpillar conference call.  Typical earnings calls are prepared remarks followed by a question and answer session.  It’s common that management puts in best spin on all topics.  That’s not to say it is a complete charade but it is close to Hans Christian Andersen’s crowd showering complements on the naked emperor’s “new clothes”.

During last week’s call, Caterpillar’s CFO referred to company’s first quarter as the “high water mark” for the year.  While the candor is admired, those are not the words that result in a higher stock price.  Cat is an iconic company with wide reaching operations so this statement can reflect many parts of the economy.  And to suggest that 2018 won’t get any better than the first quarter is a glass of water thrown in the face of the bulls.  Cat’s stock dropped 6.5% after the conference call.

Of course, Caterpillar and the rest of corporate America began projecting the benefits of lower taxes last December.  In the market’s view, this is ancient history and now it’s a case of what have you done for me lately.  Unless there is another tax cut coming, it’s no surprise that this is not supporting prices in April.

Higher interest rates are another headwind and this was a popular (or unpopular) trader topic last week.  The 10-year Treasury note’s yield topped 3% which caused much wailing and gnashing of teeth resulting in some selling.  While there is nothing magical about the 3% level, the importance was that the yield traded above 2.95% which was reached amidst February’s turmoil.  Reaching the 3% threshold naturally brought predictions of a continued move higher in interest rates.

Higher interest rates can be a problem for any economy.  The impact on the current landscape with its swollen debt levels could be dramatic.  So the stock and bond markets’ angst could be related to this.  Also, it’s important to remember that interest rates have been declining since the years when disco was popular.  And over 35 years of declining interest rates likely means that investors might not understand how markets operate in these conditions.

Stocks and bonds have provided good diversification during the past several years.  In other words, in those times when stocks went down, bonds prices moved up (interest rates went down).  And vice versa – stocks went up when bonds prices went down.  It became a popular and successful strategy to position in these two asset classes and then apply leverage to achieve good returns.

This has changed.  For the first time in many years, both stocks and bonds declined in 2018’s first quarter.  Global central banks are reducing and reversing quantitative easing.  Add to this a noticeable pick-up in inflation.  In other words, the markets are undergoing important shifts and, as this takes place, risk is increasing.

Stocks and bonds will adjust and stabilize but getting through this process could be painful and investors need to be careful.  If the markets can’t rally on strong earnings (last week for example) or removal of geopolitical risks (South and North Korea), it’s not a good sign.

This apparent illogical trading action probably doesn’t progress into a bear market.  But might result in a nasty correction.  And given the low volatility, steady rally that we’ve gotten used to, a 10% correction will feel like the apocalypse.

Of course, from adversity comes resolve and, if we suffer a setback, there will be opportunities.   They won’t be as easy as selecting a name for a Prince or using your 1st draft pick to select Sam Darnold but lower prices usually means better values.  Unfortunately, the trip from here to there might get messy with elevated pain and frustration.  However, it’s at that point that the markets usually bottom which might be kind of a big deal.

“I’m Happy When Life is Good and When It’s Bad I Cry. I Got Values But...
Scroll to top