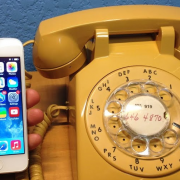 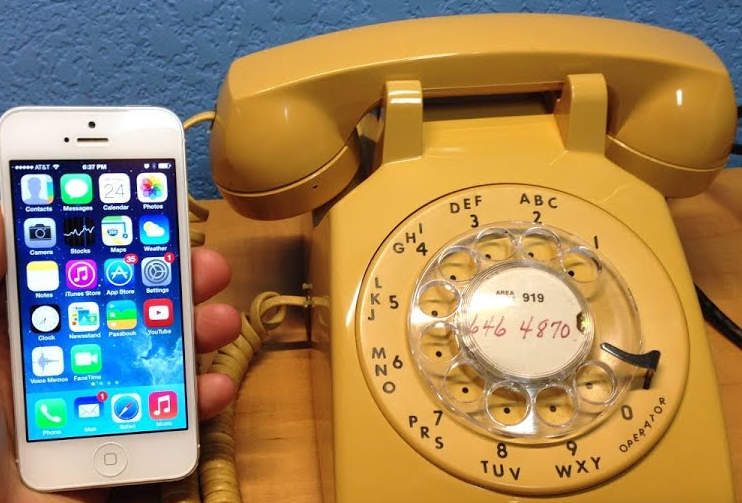 “Changes in Latitude, Changes in Attitude, Nothing Remains Quite the Same”[i]

Change is all around us and it’s all happening fast.  While some changes are fleeting and only around for a short time, others have broader impacts which results in longevity.  For example, fax machines are now as scarce as pay phones.  On the other hand\, smartphones keep getting “smarter” and will probably be a part of our lives for many years.

Likewise, the financial markets undergo continual change.  There was a time when stock trades were executed on the floor of the New York Stock Exchange. Over the years floor brokers have been replaced by computers.  Further, investors used to call their brokers for quotes and market updates.  Today we open an app.  It used to take days or weeks to build a portfolio to simulate the S&P 500 – now it happens with the push of a button.

Aside from technological improvements, there are other notable changes in the markets.  The role of central banks is among the largest and most important as they have expanded their involvement beyond the traditional tools involving monetary policy.

In times past, the Fed focused on the overnight interest rate (the fed funds rate) and money supply as their main tools to reach their goals of full employment and price stability.  Depending on the chairman’s approach, interest rates were lowered or money supply increased if the economy needed assistance.  It’s only in the past decade that far reaching and radical (and unproven) strategies such as quantitative easing, bank bailouts, massive money creation took place.

Within the new strategies, the foremost course of action for the world’s monetary authorities has been to buy bonds.  They print money and buy the fixed income securities in the market with the goal of lowering long term interest rates and stimulating the economy.  This was an ambitious effort but our monetary bureaucrats have been up to the challenge.

The big three central banks (Federal Reserve, European Central Bank, and Bank of Japan) have increased their balance sheets by approximately 355% since the beginning of the financial crisis. That’s a lot of bond buying.  The graph illustrates the steady climb of central bank assets to the peak in 2018.[ii] 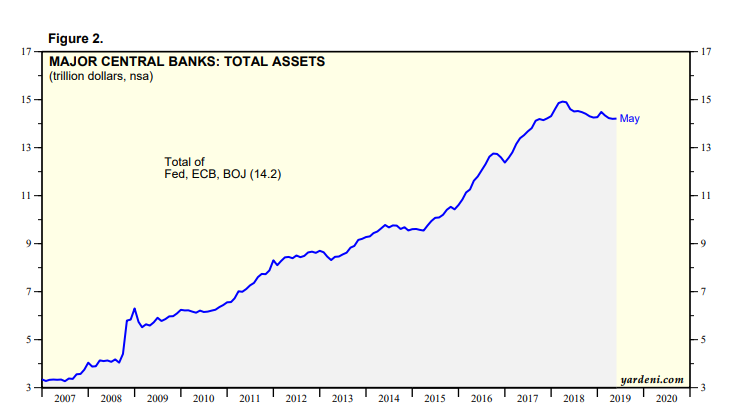 This graph breaks down the big three’s individual growth in holdings.[iii]   The Fed stopped expanding their asset holdings in 2014 and started to reduce their balance sheet.  Some believe that this played a key role in 2018’s stock market turbulence. 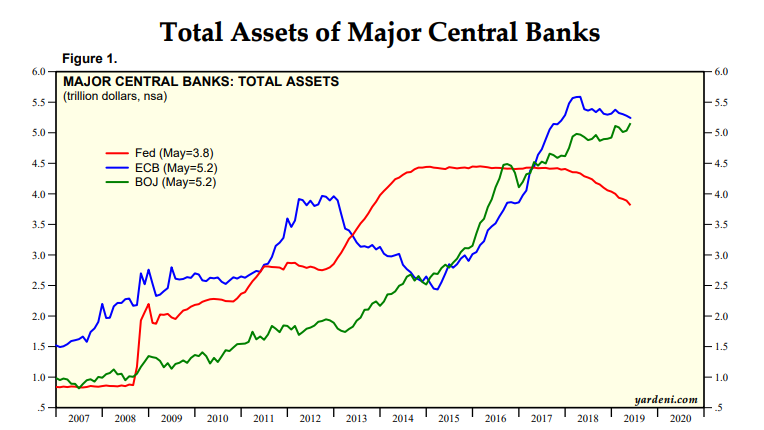 Central bankers claim that this policy was the most effective way to deal with the fallout from the global financial meltdown.  This is a much debated point in the financial markets.   Unlike the NFL, the markets don’t have replay and the ability to reverse the call.  But we can question the effectiveness of the decision.

Currently, there is approximately $13 trillion of global debt that trades with a negative interest rate.  Within the government bond market, the 10-year German Bund trades at a -0.326%, while the Japanese 10-year bond is at -0.158%.  To be clear, those are NEGATIVE yields.  In other words, investors who buy those bonds today and hold to maturity will lose money.  As a point of comparison, Australian, Canadian, and English 10-year bonds trade with positive yield but all below 1.5%.

The main reason for this head shaking, illogical situation is central bank policy.  The ECB and BOJ have taken over these markets.  They have bought so many bonds for so long (and continue to do so) that yields are below zero.  Traditionally, borrowers pay lenders an interest rate.  In the modern financial system, that is not always the case.

Another debatable central bank decision is their practice of buying stocks.  The Swiss National Bank’s stock portfolio is around $140 billion.  They own $3 billion of Apple common stock.  Further they own over $1 billion in 6 other companies – Google, Microsoft, Facebook, Amazon, Johnson & Johnson, and Exxon.

The Bank of Japan began buying stocks and ETFs (exchange traded funds) in 2010.  It has accumulated around 4% of the value of the Tokyo Stock Exchange at the same time as becoming a major holder of approximately 40% of Japanese listed companies.  The total of their holdings is around $225 billion.

Everyone is aware of negative interest rates, but the central bank stock portfolios are less publicized.  Beyond the philosophical consideration of whether public funds should be invested in risky assets, it distorts the stock market’s price discovery function.  A common response is, as long as prices go up, it has little impact.  That is ok in a bull market, but any material drop could be accelerated by nervous central bankers.

Returning to the U.S. central bank, the short term interest rate was left unchanged last week but the Fed indicated that a rate cut could come as early as the July meeting.  This news helped drive the S&P 500 to a new all-time high and stocks have now fully recovered May’s declines. This strong month was unexpected as past “Junes” have been a troublesome month.  Here are the major averages’ performance for 2019.

As mentioned this latest rally has surprised many.  Sentiment surveys showed that investors had turned pessimistic recently.  In fact a recent Bank of America Merrill Lynch survey revealed that stock allocations by professional money managers had the second biggest drop in history.  Also, cash holdings rose to the highest amount since 2011 when everyone was expecting further market turmoil from the crisis.[iv]

This is partially in response to worries over slowing economic growth, trade wars, and geopolitical tensions.  Of course, last week’s Fed signal that interest rates will be going lower and not higher changes the perception.  It would be unlikely that stocks sell off dramatically when everyone is expecting a drop.

As a reminder, the stock market went on a 6 year winning streak after 2011.  Of course there are many different factors currently vs. 2011.  But this extreme level of cautiousness would suggest that a lot of bad news is priced in.  Further, given the punishing amount of pressure on performance, if stocks begin to rally, this money on the sidelines could chase prices higher and it could last for a while.

A few months ago the markets were struggling to determine whether the Fed would raise interest rates 2 or 3 times in 2019.  Instead, faster than Apple can replace that new phone, we learned last week, Chairman Powell has softened his stance and the markets are now expecting a cut in July.  There is an example of sudden change.  The key to the markets isn’t about being bullish or bearish, it is now about adapting to change.

Death and Taxes are certain…well maybe not so certain!